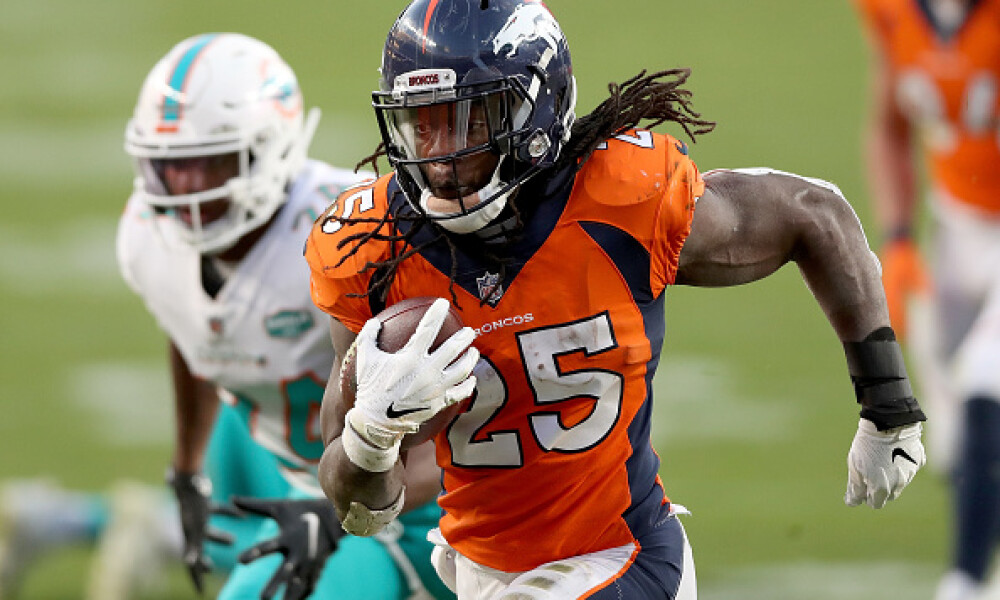 There are many popular draft strategies that you see and hear about when it comes to fantasy football. One that has long been a topic of debate is that of the ZERO-RB. The idea behind the ZERO-RB draft strategy is that given the increased risk of injury to the position that it makes more sense to invest early draft capital at the other positions, ensuring you have elite talent and then drafting a high volume of mid-to-late round running backs to fill out the depth chart with the idea that those players could easily become a featured back on their roster if the starting running back was to get injured.

While it feels like every season is the worst season when it comes to injuries, the 2020 fantasy football season certainly left some scars on those who invested the early draft capital at the running back position.

Per 2020 ADP below were the top 12 running backs taken in drafts last season:

Pretty much EVERY running back in the list above failed to live up to their draft stock with the exceptions being Alvin Kamara and Derrick Henry. The list of those who struggled can even be extended into the next few rounds as well with the likes of Austin Ekeler, James Conner, David Johnson, Le’Veon Bell, Leonard Fournette, Todd Gurley, Mark Ingram, Devin Singletary, Raheem Mostert, Cam Akers, etc. You get the point here, right? Basically 20 of the top 25 running backs taken failed to return their draft capital and truthfully there are more running backs to add but for the sake of hammering home the point, you get it.

So, with the focus this year, again, on the ZERO-RB strategy, let us take a look at some running backs to target in the mid-to-later rounds of your draft that have the upside to be a consistent contributor on your roster this season after you fill out your other positions based off their consensus ADP which you can find using the Fantasy Alarm ADP Tool.

Using the 12-team fantasy league format I consider these backs to be part of the ZERO-RB strategy because most are not targeting them to be their RB1 on the season but at best RB2 if not RB3 and RB4. These backs have an average ADP starting no earlier than round five so at this point your roster has likely filled out the wide receiver position, quarterback position and possibly even the tight end on your roster.

Mike Davis, ATL (69.49) – The Falcons brought in a new head coach this offseason in Arthur Smith who had previously been the offensive coordinator for the Tennessee Titans for the past two seasons. As we know, the Titans ran the football A LOT with Derrick Henry as any team with Derrick Henry should. I don’t expect the Falcons to run AS MUCH as the Titans did, but the offense is still likely to be focused on the running game. The depth at the position behind Davis is sparse and that is being kind. Currently Cordarrelle Patterson, Qadree Ollison, and Tony Brooks-James are the backups to Davis in Atlanta. Hard to think any of them work their way into taking touches from Davis here.

Last season Davis was a player that was picked up off waivers in most fantasy leagues following the injury to Christian McCaffrey and he put up solid overall numbers, rushing for 642 yards and six scores while adding 59 catches on 70 targets for 373 yards and two more touchdowns. He wasn’t the most efficient runner but his work in the passing game was very notable, especially when you consider the fact that the Falcons are not expected to be that good and therefore Davis should be used often in those passing down scenarios. Davis should also be locked into the teams red zone work so, seeing him top those six rushing touchdowns as an every down back would not be surprising.

Melvin Gordon, DEN (75.56) – This is an interesting one because the Broncos traded up in the second round to draft rookie Javonte Williams from North Carolina. Williams is being drafted well ahead of Gordon in most fantasy drafts right now with many feeling like the rookie is going to open the season as the starter with Gordon possibly even being cut by the Broncos to just outright give the rookie the job. IF Gordon gets cut, I see him getting signed pretty quickly so drafting him here doesn’t really worry me much. I’m also skeptical of the idea that a rookie running back is going to come in and just overtake the starting role from a player in Gordon who ran for 986 yards last season in 15 games while averaging 4.6 yards per carry and scoring nine touchdowns. Gordon also added 32 catches on 44 targets for another 158 yards and a score. It feels like a big task for Williams to come in and just take the outright role with Gordon still on the roster. Even if we find that this becomes more of a timeshare, Gordon should still work all of the passing downs which will help stabilize his fantasy value.

Kenyan Drake, LVR (108.36) – Last season Drake was being drafted at the end of the first round following his explosive second half of the 2019 season. Ultimately, Drake failed to match his ADP as he ran for 955 yards and ten touchdowns while catching just 25 passes for 137 yards. Now with the Raiders and with an ADP of him going around the eighth-to-tenth rounds depending on league size I think there is an opportunity here for value. Josh Jacobs is a back that tends to get beat up and this is the first time that the Raiders have had a real capable backup behind him to help carry the workload. Add to the fact that Drake is a very good pass catcher and I think we are looking at the Raiders new third down and change of pace option that has the upside of being the starting running back should Jacobs get injured again during the season. There have also been some reports that we may see Drake running as a wide receiver at times this year as well which will only increase his value. If looking for a high upside play at this point in the draft I am very comfortable investing in Kenyan Drake at his current ADP than his APD last season.

Gus Edwards, BAL (121.72) – The Ravens LOVE to run the football and Edwards has been very good at doing just that whenever he gets the opportunity to touch the ball. In his three seasons with Baltimore he has eclipsed 700 yards rushing in each of them while averaging 5.2 yards per carry. In 2020 we saw him score a career best six touchdowns as well. The upside for the Gus Bus is clear as can be. The issue of course is the fact that J.K. Dobbins is the starter and Lamar Jackson is the quarterback. Both are going to be involved in running the football and we know that Jackson is not afraid to take it into the end zone when they get down towards the goal line. What I like Edwards for here is the consistency. I don’t see the carry splits ever being much more than 60/40 between the two backs and if something happens where Jackson decides to run less to save his body or Dobbins struggles or gets injured then you have a bruising back that averages 5.0 yards per carry seeing increased touches with high upside.

Phillip Lindsay, HOU (155.39) – Lindsay joins a Texans running back group that is full of question marks. David Johnson looked every bit washed up as people suggested he was going into last season. Mark Ingram lost his job with the Ravens last season to the point that he was a healthy scratch towards the end and Rex Burkhead is coming off a torn ACL. Now, Lindsay himself dealt with injuries that limited him to just 11 games last season, but he is still just 26 years old and began his career with back-to-back 1,000-yard seasons before Denver decided to bring in Melvin Gordon. It is hard for me to look at the backs in Houston and not think that Lindsay has the best chance to take this starting gig outright. He also has the ability to catch the football which may be key should the starting QB for Houston this season be Tyrod Taylor as Taylor is not a great downfield passer and during his tenure as the Bills QB had often looked towards LeSean McCoy as his favorite receiver. Going this late in drafts, Lindsay feels like a must grab for those using ZERO-RB.

Tevin Coleman, NYJ (188.96) – A lot is being made of rookie Michael Carter being drafted by the Jets brass, but Carter was never the early down back in North Carolina, that was Javonte Williams who went in the second round to Denver. While Carter certainly has a valuable skillset and should be involved in the Jets offense this season I find it hard to ignore that new Jets head coach Robert Saleh and offensive coordinator Mike LaFluer come over from San Francisco and then sign Tevin Coleman who was with the 49ers for the past two seasons. Coleman knows the offensive scheme they want to run and was largely effective when healthy for them in 2019. Now, given the 49ers style of offense, we know a time share is going to be used at the position but going this late in drafts, I think Coleman is worth the snag as he is likely going to work red zone packages, has the ability to catch the football if need be, and will see early down work at the very least start the season unless he looks completely terrible during the preseason.