Fantasy Baseball Daily Round Up: March 30 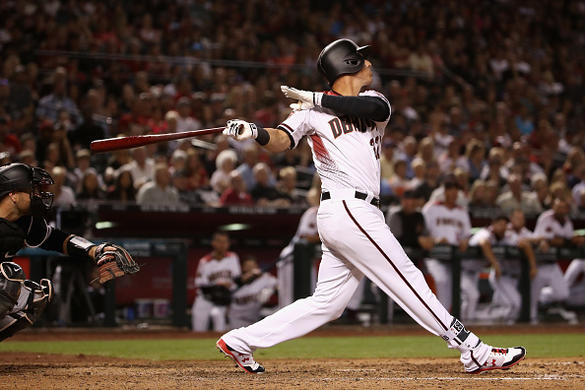 Opening Day has come and gone. We have learned a lot and overreacted a ton more. Remember that many people often overreact at the beginning of the season, but fantasy baseball is not fantasy football. It is a marathon, not a sprint. If you put in the prep work to get ready for the season, then trust the process. For the most part, you should only be reacting to big news (i.e. closer changes, call-ups, and injuries) for the first couple of weeks. That being said, let’s have some fun... 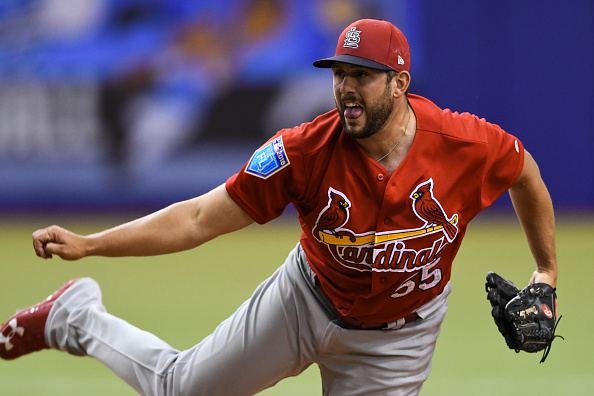 Greg Holland signed a one-year deal with the Cardinals worth $14 million. This screws a lot of fantasy owners (including the author of this piece) who invested in different options within the Cardinals bullpen. If you are one of these unlucky owners that bought in on Luke Gregerson, Dominic Leone, or Tyler Lyons, DO NOT cut bait yet. The deal is pending a physical and it should be noted that Holland has a long history of health issues. Considering this and the fact he didn’t have a traditional spring training, Holland may get inserted into less stressful situations at the beginning of the season before manning the ninth inning role.

Mark Melancon was placed on the DL after dealing with continued arm issues. While many believed Sam Dyson would be the first man up, manager Bruce Bochy proclaimed Hunter Strickland would be the interim closer. Strickland did not disappoint in his first save opportunity, as he shut the door on the National League champs. Strickland has the best stuff in the Giants bullpen and could easily hold the role until Melancon returns. To be even more optimistic, there is a chance that Strickland could be the guy for a long time, if Holland’s arm issues persist.

Keone Kela was announced as the Rangers closer by manager Jeff Bannister. This is interesting news considering that Kela has not been very healthy and fell out of favor of the team last year. He has great skills and could be fantastic in the role, but the Rangers changed their closer a the drop of a hat last year, so I wouldn’t get too invested in the situation.

Aaron Nola was cruising through 5.1 innings when he was pulled by manager Gabe Kapler after giving up a double to start the inning. Nola was only at 68 pitches at the time and would be charged with a run after Hoby Milner (who?!?) gave up a two-run shot to Freddie Freeman in the next at bat. While this didn’t necessarily cost the Phillies the game, it is a bit concerning that Kapler would give Nola such a quick hook. It is something to monitor because if Kapler is going to pull his starters early, then it could severely alter their bottom line in fantasy. Let’s not jump to conclusions after one game, but keep an eye on this. This wasn’t the only interesting coaching decision by Kapler either. Both Odubel Herrera and Scott Kingery were not in the Opening Day lineup. Herrera would come in as a defensive replacement later in the game, but Kingery spent his first Opening Day riding the pine.

The Diamondbacks beat the Rockies 8-2 in Chase Field. This is the first year that the Diamondbacks have used a humidor for the baseballs in order to help suppress the long ball and offense in their park. It didn’t seem to have much of an effect in game one, but this is something to monitor as we start to get more of a sample. One game doesn’t mean much in the grand scheme of things, but once we start getting through 8-10 games at Chase, we should start to really see some trends.

Kevin Plawecki got the start on Opening Day instead of Travis D’Arnaud and responded with a 2-for-3 day, including an RBI and two runs scored to go along with two walks. Plawecki is coming off a spring training in which he hit .270/.341/.405 and the Mets may finally have tired of D’Arnaud and his unfulfilled promise. In deeper formats where you may have lost catchers like Salvador Perez and JT Realmuto, Plawecki may be worth the gamble.

The Orioles had Chris Davis leading off for them and started Craig Gentry and Pedro Alvarez over Anthony Santander and Colby Rasmus. I don’t even know what to say. 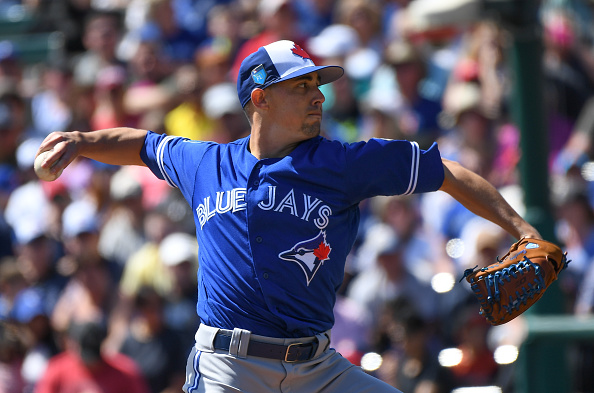 Masahiro Tanaka vs Aaron Sanchez. Both are coming off of disappointing seasons, but have great upsides. I am heavily invested in Sanchez, but not so much in Tanaka.

Alex Wood’s velocity. He faded down the second half last year. Was he tired after not pitching a lot of innings in the previous two years or was it something more?

Robbie Ray. If the humidor has the intended effect, Ray should be a huge beneficiary. Let’s see those exit velocities tomorrow.

The Nationals’ and Pirates’ lineups. A lot of new faces in Pittsburgh, so it will be interesting to see the construction of the lineup opening day as they faces the Tigers. The Nationals are down Daniel Murphy and Ryan Zimmerman has been ailing. They get back Adam Eaton, so it will be interesting to see how the lineup is constructed and what effect that may have on seasonal and DFS fantasy. 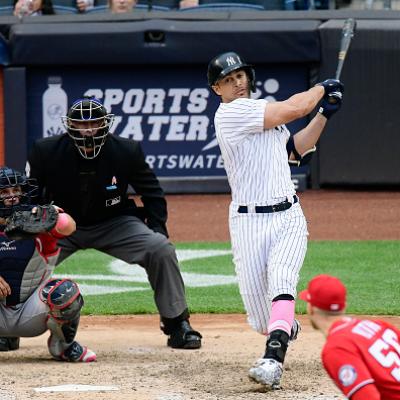 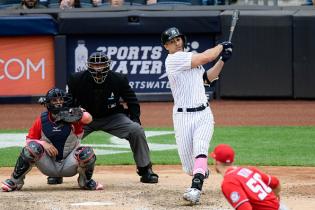 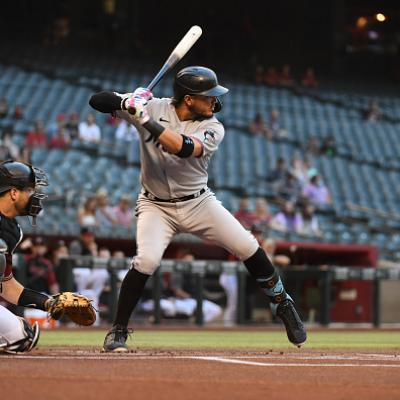 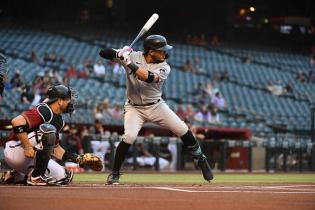 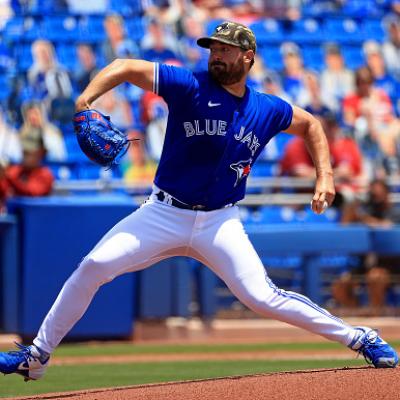 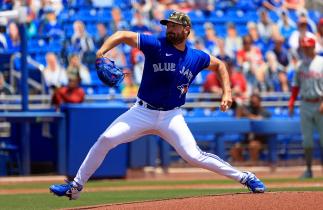 Fantasy Baseball Week That Was & Will Be: Ray of Light
Glenn Colton
Published Yesterday 6:40 pm (EST) 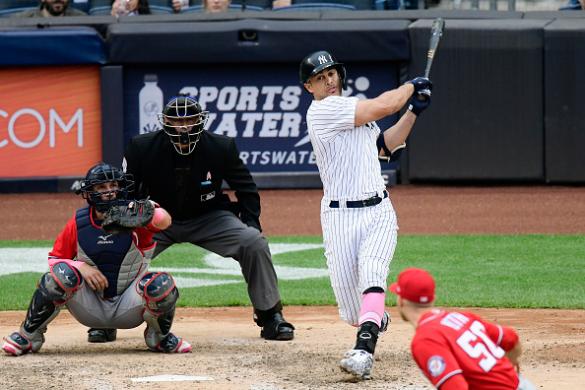 MLB Albert Pujols drives in run in debut with Dodgers

MLB Darvish strikes out 10 over seven scoreless in win

MLB Iglesias strikes out side, picks up seventh save

J. Lagares - CF
LAA
Juan Lagares had to leave Monday's game versus the Indians because of a toe injury.
Lagares jammed the toe against the outfield wall while he was trying to track down a home run ball. He will be evaluated further before it's determined whether the injury might be more than a day-to-day situation.
Added 1:53 am (EST)
Added 1:53 am (EST)

W. Buehler - SP
LA1
Walker Buehler allowed just a hit over seven shutout innings on Monday to help the Dodgers to a 3-1 win over the Diamondbacks.
Buehler did walk four, with three of those free passes coming in one inning. Outside of that frame, it was a dominant effort from the 26-year-old, who threw 63-of-98 pitches for strikes and allowed just a single to Josh Rojas. It's a nice "bounceback" for the right-hander after the four runs allowed on three homers against the Mariners on Tuesday, but even that start saw him fan eight with one walk. Buehler lowers his ERA to an impressive 2.98 and even with the four walks has a 54/7 K/BB mark. Outside of baseball being a hard game, there's no reason to think he won't be successful on Saturday against the Giants.
Added 1:18 am (EST)
Added 1:18 am (EST)

K. Jansen - RP
LA1
Kenley Jansen didn't allow a run over 1 1/3 innings on Monday against the Diamondbacks.
Jansen allowed a hit and a walk after coming in with two outs in the eighth. The veteran closer picks up his eighth save of the season, and he lowers his ERA to 1.53 in the process. Jansen had struck out two batters in each of his previous three appearances, so it's tough to complain about an appearance without a punchout.
Added 1:17 am (EST)
Added 1:17 am (EST)

A. Pujols - 1B
LA
Albert Pujols went 1-for-4 with a run driven in on Monday in a win over the Diamondbacks.
Welcome back to the National League, Albert. In his first game with the Dodgers, Pujols hit fourth and singled home Mookie Betts to give Los Angeles a 2-0 lead. The 41-year-old is nowhere close to the player he was with the Cardinals -- or even the Angels at the beginning of that contract -- but when he's in the lineup against lefties, he's worth a look; depending, of course, on who that lefty on the mound is. Regardless, it's fun to see one of the most successful hitters in the sport's history enjoy his first night with his new club.
Added 1:17 am (EST)
Added 1:17 am (EST)

W. Smith - C
LA1
Will Smith went 2-for-4 with a homer and two runs scored on Monday in a win over the Diamondbacks.
The other hit for Smith was a double. The backstop gave the Dodgers a 1-0 lead with a solo homer off of Madison Bumgarner. He also came around to score on a Gavin Lux single. The .255 average from Smith isn't ideal, but a .361 on-base percentage, .472 slugging mark and four homers along with 14 RBI in 34 games are solid numbers from the starting backstop over his first 32 contests.
Added 1:17 am (EST)
Added 1:17 am (EST)

J. Rojas - RF
ARI1
Josh Rojas went 2-for-4 on Monday in a loss to the Dodgers.
On a night where the Diamondbacks were only able to pick up four hits -- only one of those off Walker Buehler -- and half of that production is from Rojas. The two-hit night sees the 26-year-old increase his average to .289, and that's even more impressive when you consider he was hitting an even .200 at the end of the month. There's not a ton of power in Rojas's game, but he can certainly help fantasy managers in the average category.
Added 1:17 am (EST)
Added 1:17 am (EST)

Y. Darvish - SP
SD1
Yu Darvish didn't allow a run over seven innings while striking out 10 on Monday in a 7-0 victory over the Rockies.
Darvish allowed just four hits, and he didn't walk anyone. It's the fourth win of the season for the 34-year-old, and he showed off his usual swing-and-miss stuff with the ability to command it as well as anyone. It's the seventh time in eight starts that Darvish has allowed no more than a run, and it's seen his ERA drop to 1.81 with a 69/13 K/BB ratio. Darvish should have no trouble carving up the Seattle lineup on Sunday when he faces the Mariners at home.
Added 1:12 am (EST)
Added 1:12 am (EST)

J. Gray - SP
COL1
Jon Gray gave up seven runs -- five earned -- in 5 2/3 innings while picking up a loss on Monday to the Padres.
Gray allowed ten hits in the loss, and while he did have some defensive issues behind him, it'd be hard to blame his struggles in this one on them. He gave up a two-run homer to Manny Machado in the first -- with another run coming across later in the inning -- and he allowed two more in the fourth and sixth. Gray sees his ERA jump up to 3.48, and a one-walk, one-strikeout performance puts his K/BB ratio at 45/20. He'll look to rebound over the weekend against the Diamondbacks.
Added 1:12 am (EST)
Added 1:12 am (EST)