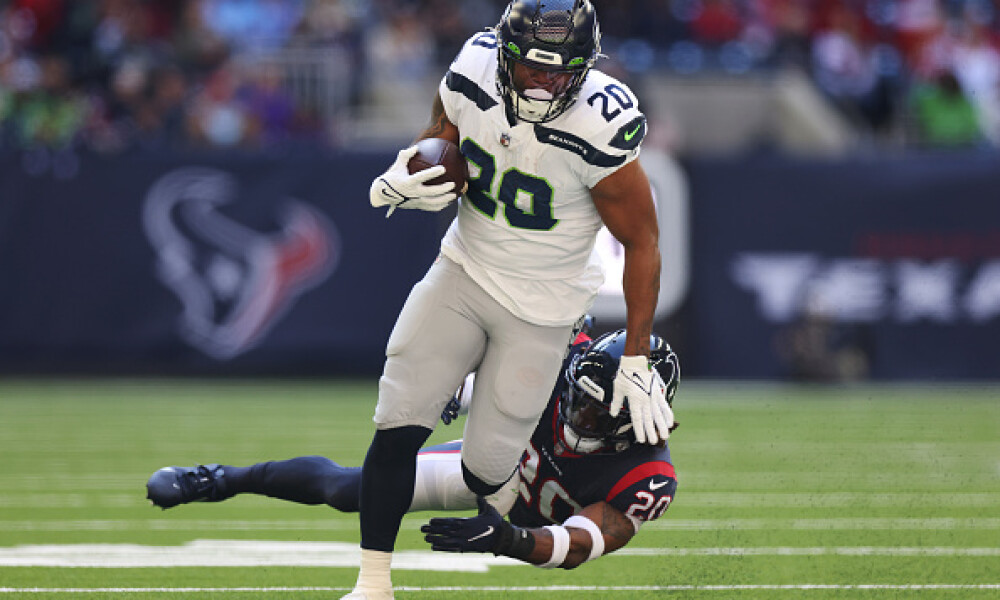 Playing out your season long fantasy football league until the last game of the regular season can obviously be tricky.

One potential negative is that teams who’ve already clinched their playoff spot may choose to rest some of their starters. For instance, you couldn’t blame the Packers, who clinched the NFC North, the number seed and home field advantage throughout the playoffs, if they decided to sit Aaron Jones or at least limit his touches this week.

On the other hand, many teams needing a win to clinch a playoff berth, win a division or even secure an early round bye will certainly start their regulars this week. There are also a few coaches on the hot seat (like Matt Nagy) who will use their best weapons to end the season on a winning note to avoid being a Black Monday casualty.

Finding RBs with fresh legs to put in your starting lineups in Week 18 of the regular season isn’t easy but there are a few to be found.

Seahawks back Rashaad Penny is one such back. He only started getting regular carries in Week 14 and since then he has the second most rushing yards (516) in football. He also has 5 TDs in his last four games.

Elijah Mitchell made his first start for the 49ers since Week 13 this past Sunday and rushed for 119 yards (5.67 YPC).

The Lions eased D’Andre Swift back into things in Week 17. He only had four carries but played the most snaps and ran the most routes of any Lions RB. He should have a busier afternoon in Week 18 and is always a factor in the Lions’ passing game.

Titans RB D’Onta Foreman didn’t see his first game action until Week 9. He’s rushed for at least 108 yards in three of his last five games, rushing for three TDs and averaging 4.67 YPC during that time span. Derrick Henry is expected to begin practicing this week, but Foreman will be the lead back for at least one more game.

As you’d expect there are several RBs who are nursing injuries or affected by COVID-19 heading into the final game of the regular season.

There’s a chance that Chiefs back Clyde Edwards-Helaire will play this week. Watch his progress. If not Darrel Williams, (88 rushing yards, two rushing TDs and three catches in Week 17) will again be the team’s lead back.

Monitor the Browns’ RB situation for Week 18. Nick Chubb could be limited due to a rib injury, D’Ernest Johnson was placed on the reserve/COVID 19 list and Kareem Hunt (ankle) hasn’t played since Week 14.

Speaking of sneaky plays, there’s a chance that Le’Veon Bell may be the Bucs’ only healthy back for Week 18 against the Panthers. Ronald Jones is having an MRI done on his ankle and Ke’Shawn Vaughn is dealing with a rib injury. Leonard Fournette isn’t expected to return to action until the playoffs.

Keep an eye on Damien Harris (hamstring) this week. Rhamondre Stevenson would be the Patriots’ lead back for Week 18 if Harris is sidelined.

There’s a chance that the Cardinals may elect to sit or at least limit James Conner’s (heel) and Chase Edmond’s (ankle) playing time this week against the Seahawks. According to Kliff Kingsbury he’s "going to see how they progress the next couple of days. I don't exactly know how much we'll use them, but we want to make sure they are ready for the playoffs.” Eno Benjamin and Jonathan Ward would have expanded roles if Conner and Edmonds are inactive.