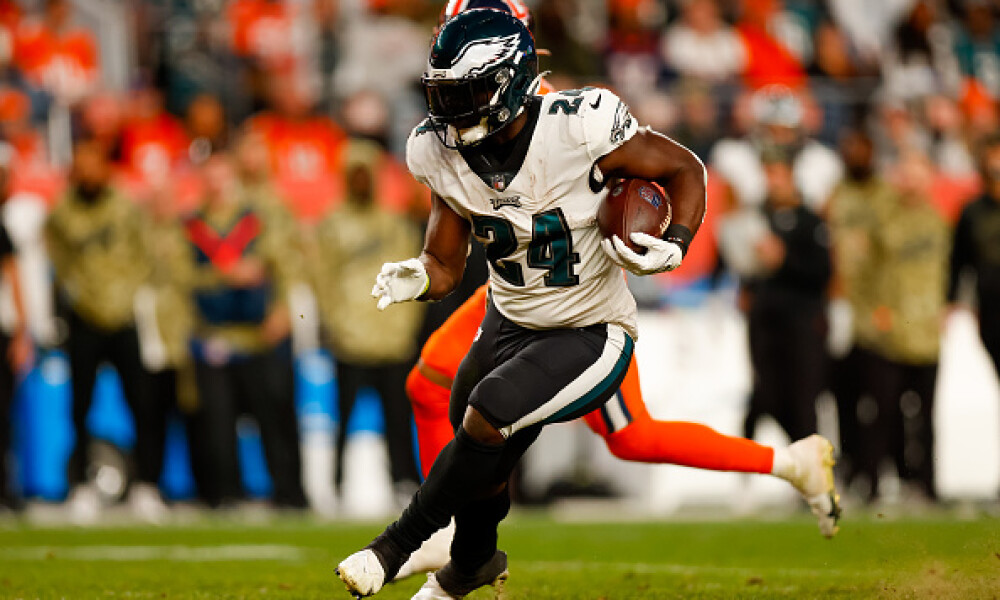 It’s Week 14 and your league’s playoffs are either about to start or they are right around the corner. Unfortunately, some marquee RBs, like Christian McCaffrey, Dalvin Cook, and Derrick Henry will be inactive due to injuries. Other preseason first round RB picks like Ezekiel Elliott (RB 13 on the season based on PPR fantasy points per game) and Saquon Barkley (RB 29) have severely underperformed thus far this season.

Cook should be back in action in time for you to use him for a game or two of your league’s playoffs and you should feel comfortable starting him. Many of us live by the fantasy credo of “starting your studs” but Elliott (RB 26) and Barkley’s (RB 28) production over the past three weeks will make many of us rethink our strategy.

There are some backfields that you’re going to want to avoid if you’re facing a must win matchup. It’s tough to trust any individual RB who makes up the three headed monster in the Bills’ backfield when all three are active in any given week. Devin Singletary has 25 carries over the past two weeks but only averaged 3.2 YPC over that time span. Matt Breida was averaging just under 20 snaps per game heading into Week 13 but played just seven snaps on Monday night, losing playing time to Zack Moss who had been a healthy scratch in Week 12.

If you combined all four of the Seahawks’ RBs (Rashaad Penny, Travis Homer, DeeJay Dallas and Adrian Peterson) would you have one productive fantasy relevant RB? Peterson scored his obligatory first TD for his new team in Week 13 but with Alex Collins (inactive in Week 13) likely back this week one of the Seahawks’ backs is going to be a healthy scratch. In describing his strategy for Week 13 head coach Pete Carroll explained he just “went with the guys who practiced the best this week who were the most healthy during practice”. You’ve got to have a better option than to start a Seahawk RB this week.

Other backfield situations to take note of heading into Week 14:

Rams RB Darrell Henderson (thigh) was active Week 13 but didn’t play a snap. Sony Michel (121 rushing yards, 3 catches and a TD in Week 13) should have a role in Week 14 as Henderson might not be at 100% this week. Watch his progress carefully.

San Francisco 49ers RB Elijah Mitchell is in the league’s concussion protocol as this article is being written. If he’s not cleared to play this week look for JaMychal Hasty and Jeff Wilson Jr. to potentially share the workload in the 49ers backfield against a tough Bengals run defense.

The Patriots are on a bye in Week 14, which is good news if you roster RB Damien Harris. Harris was unable to finish his Week 13 matchup against the Bills due to a hamstring injury. If rookie Rhamondre Stevenson is available on the wire, do yourself a favor and pick him up just in case Harris is still not 100% heading into Week 15.

The Eagles, who love to run the ball, are also on a bye this week which should give Miles Sanders’ ankle some extra time to heal. However, if you have a dead spot on your fantasy roster you might want to pick up Jordan Howard ahead of Week 15 just in case Sanders’ injury is more serious than the Eagles are letting on. Howard had three TDs and a 5.4 YPC average in four games before injuring his knee and could be back in action in Week 15.

Just in case your league hasn’t noticed, or you play in a shallow league, Ravens RB Devonta Freeman is averaging just under 14 carries and just over 3 catches per game over the past five weeks. He has a modest 3.87 YPC average but has three total TDs during that time span.