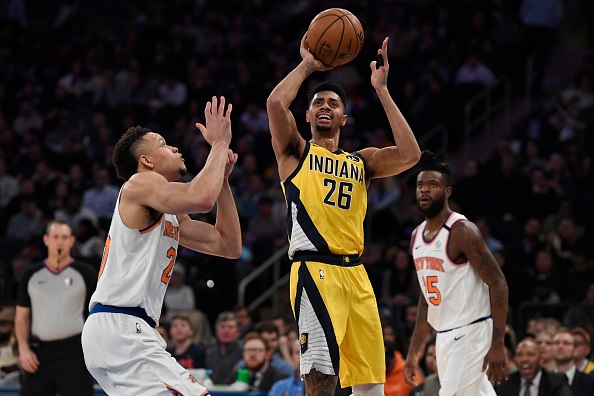 As mentioned before, teams will be rotating a lot more players in and out because of COVID-19 and last year’s rules of not mentioning players in this article for 4 weeks are out the window. We have to react quickly as we never know when three or four players will suddenly be ruled out of the game. It’s normally not just the player who tests positive, but it has cost other players games because of the NBA’s protocol. Players of impact may have to be dropped if a quarter of your team can’t compete for the week because of issues surrounding the virus. Like they say in the Karate Kid and Cobra Kai, “strike first”!

Jeremy Lamb SG, SF IND-38% Ownership: As we are already starting to see, the training wheels are coming off and the minutes increase between Lamb’s first two games shows that the swelling and soreness as he shakes the rust returning from a serious Knee injury has subsided. It’s perfect timing because with Caris LeVert and T.J. Warren out for an unknown amount of time, Lamb will slide right in and he’s more skilled overall than Justin Holiday . Lamb is a sharp-shooter from the outside and he’s just as dangerous on the other side of the ball and just like he’s done his first couple of games, he’ll help grab steals. Lamb grabbed seven boards in his previous game and even shot the ball 14 times. There are plenty of shots to go around in Indiana and Lamb should toggle with Myles Tuner as to who the third scoring option is on the Pacers behind Malcolm Brogdon and Domantas Sabonis .

Cole Anthony PG ORL-31% Ownership: As raw as Anthony looks thus far, it’s hard to ignore the opportunity that has presented itself for him this quickly into his career. Yes, Evan Fournier is back, but Anthony will still need to help run the point. Anthony has also scored in double figures in four of his last six games and we’ll have to see if he can hit the 10-shot mark consistently because his shots have decreased slightly, but he’s seeing late-20’s minutes and that gives him a good floor considering Markelle Fultz is out for the rest of the season. Michael Carter-Williams will eventually be his competition for minutes, but he’s still out with an injured Foot and this is Anthony’s time to show what he can do. He has good handles, but his shot selection needs to improve. On defense, Anthony has been scrappy and he’s blocked shots in his last four contests and grabbed steals in three of them. He’s also pulled down five or more boards in his last three games.

Robin Lopez C WSH-10% Ownership: As the Wizards finally get ready to resume playing, we have to go all the way back to when Thomas Bryant first got hurt. Lopez produced a double-double in 26 minutes and now going up against the aging Spurs frontcourt, Lopez can be sneaky and can put up another 10 and 10 game. Lopez is more aggressive in then paint than his brother Brook and with the Wizards having a lot of cold players due to getting hit hard by COVID protocols, there may be a good amount of missed shots early and Lopez should benefit on the boards. He’s not that quick, but with his one-handed shots in the post, he has a high release point. Look for him to produce points and boards. He sets good screens and shouldn’t have a hard time cutting to the basket. LaMarcus Aldridge looks like a shell of himself and his next couple of opponents will be good tests for him.

Rudy Gay F SAS-28% Ownership: He’s doing just enough to warrant a roster spot and even though his minutes have been a bit all over the place, Gay is worth the add for short-term scoring. The Spurs need all of the mid-range scoring they can get and Gay will toggle between the elbow and arc and he shoots at least 10 shots per game. He may only play 23-25 minutes, but that hasn’t stopped him from grabbing seven-plus boards in three of his last four games. Gay has grabbed swipes in two of his last four contests. He hits 1.7 three-pointers per game. There isn’t a massive ceiling with him when it comes to overall production, but as he proves every year, he is still involved in the offense nightly and the Spurs don’t have a lot of skilled players under the basket and that will keep him over 20 minutes per game for the most part.

Naz Reid C MIN-22% Ownership: With Karl-Anthony Towns out for another couple of games, Reid has been helping out big time with scoring and while his short-term scoring role on this team doesn’t make him as appealing, it’s not easy finding big men on the waiver wire and he’s scored at least 13 points in each of his last 3 games. Reid is a bit of a match up problem because he can help stretch the floor and he’s hit two three-pointers in two of his last three contests. He’s also been blocking shots as well as he’s contributed nine blocks total over his last four games. He’s earning his minutes from the way he’s played and he’s been getting mid-to-late-20’s when it comes to playing time. The opportunity is certainly there and as he gets ready to battle the Warriors in his next two games.