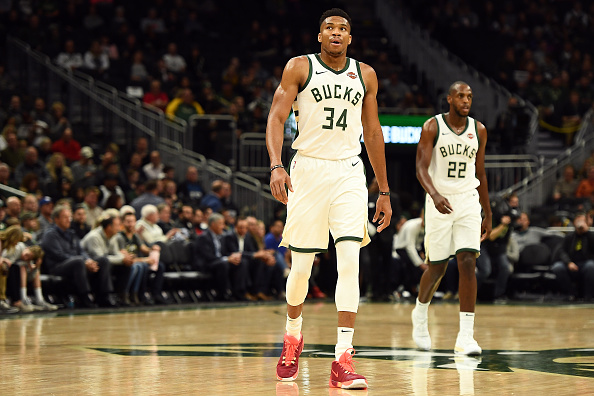 While we continue to wait for the NBA to come down with a ruling, we know that the NBA Lottery and Combine have been postponed. This shouldn’t come across as a shock and this does not mean the season is over. In fact, it proves to me that the NBA is still possibly trying to find ways to get in regular season games before the Playoffs begin. We should have more clarity on where the league stands by the end of the month. Remember, hope is a good thing! Here is where things stand in the Central Division in the Eastern Conference.

After losing to Toronto in the Eastern Conference Finals last season, the Bucks are looking to avenge last season and they have the best record in the league. Even with the departure of Malcolm Brogdon , the team continues to roll with immense depth and let’s face it; Giannis Antetokounmpo is one of the hardest men to stop in the game today. He could be on his way to a second MVP. It’s Giannis vs LeBron at this point with Giannis having the edge if the regular season is over. Along with fellow All-Star Khris Middleton , the Bucks have a strong offensive attack that averages a league-best 118.6 points per game. Surprisingly, they were on a three-game losing streak when play was stopped. This team is a family reunion of sorts because you have both Lopez brothers and two of the three Antetokounmpo’s. They were even able to grab veteran PF Marvin Williams to further help their depth. Kyle Korver is a seasoned veteran who will help hit big three-pointers in the Playoffs. One of the players I’m most impressed with is Donte DiVincenzo . While he doesn’t score 10 points per game, Brogdon being off the team totally benefits him and he has shown his ability to handle the ball, play off the ball and he actually leads the team in steals. He’s a strong defender that has good agility to fight through screens. He is a very blue-collared with the way he plays the game. Brook Lopez still doesn’t rebound too well, but his ability to hit three-pointers regularly makes him a hard man to guard. He ranks second in the league blocking 2.4 shots per game. The Bucks main competition in the East is still the Raptors. They played two of their four scheduled games against them and beat Toronto both times. It seems to be between the Bucks and the two Los Angeles teams for the Championship. A cancelation of the season would be devastating for the city. They look like they are in prime position to go to the Finals. If the standings end as they are now, they’d take on Orlando in the first round.

Malcolm Brogdon ’s new team had to start off the season without Victor Oladipo and they were able to hold strong. Brogdon emerged as the on-court leader early on and led the team in assists dishing out 7.1 dimes per game. The Pacers surrounded themselves with other good defensive role players such as Jeremy Lamb who leads the Pacers with 1.2 steals per game. Like the Bucks, the Pacers also have a set of Brothers in the Holiday’s (not Jrue). Aaron and Justin would step up a ton when other players were out. Aaron has tremendous quickness that keeps the pace of the offense quick when on the court and Justin is a strong wing defender and can hit knockdown three-pointers. The Pacers used kid gloves bringing Oladipo back into the mix and he was just starting to hit his stride and was playing just about 26 minutes per game when play was halted. He needed a good amount of time to shake the rust. The Pacers are also anchored by their big men Myles Turner and Domantas Sabonis . Sabonis ranks fifth in the NBA in rebounding and Turner ranks fourth in blocked shots. They’ve learned to co-exist better in the post this season. Turner hangs more at the arc and elbow and Sabonis controls the paint. The Pacers are actually led in scoring by T.J. Warren (18.7 points per game). Warren is not only a strong shooter but he is a good combo-forward who is very feisty on the perimeter. He swipes the ball 1.1 times per game. He can help stretch the floor as well. If the regular season is over, they will start on the road against Miami. The Heat have beaten them twice this season. The other two contests have yet to be played. The key for pulling off the upset is to contain Jimmy Butler and Bam Adebayo and make the other Heat complimentary players beat them and Turner and Sabonis can shutdown the lane and Warren and Oladipo can keep Butler at the arc. The series would be very physical and it’s a coin toss regarding who would win. The Heat have struggled mightily on the road and that could end up burning them (pun intended) in the post-season. The Pacers have winning percentages both at home and on the road.

The Fact that the Bulls are third in this division is frightening. It has been a miserable year for the Bulls as they’ve had to deal with most of the roster being out at different points in the season. Lauri Markkanen missed 15 games, Wendell Carter Jr. missed 22 games and Otto Porter Jr. missed most of the season. The only players to hit the 60-game mark in games played are Zach LaVine , Coby White , Tomas Satoransky and Thaddeus Young . If you remember, they were so light in depth Kris Dunn (missed 14 games) had to start at Small Forward, which is absolutely crazy. That’s how hurt the roster was. A Point Guard needing to fill in at Small Forward. Dunn leads the team averaging two steals per game. The Bulls are led in scoring by Zach LaVine . LaVine has dealt with injuries over the last few season’s and he’s actually been one of the healthiest players on the team. He leads the team in scoring with 25.5 points per game. The second leading scorer on the team is Markkanen with 14.7 points per game. LaVine clearly runs the show. Once Porter came back, he was on a heavy minutes restriction and was just starting to get his groove back. Porter is injury-prone and is hard to rely on as a building block for the Bulls future. Even though the Bulls have been hampered by injuries, the one positive light has been the emergence of rookie Coby White . White is a strong driver with tremendous speed (and hair). White will compete with Satoransky for the starting job next season. He’s probably still more useful coming off the bench as the change of pace player. He is one of the most fun players to watch in the league and could be in competition for Sixth Man Of The Year in 2021. The Bulls are eight games out of a Playoff spot and they are heading to the lottery.

This has been a transitional season for the Pistons. Blake Griffin looked horrible when on the court and only played in 18 games and was ruled out for the rest of the season with a Knee injury. Pistons mainstays Andre Drummond and Reggie Jackson are no longer on the team and they even got rid of Markieff Morris . Shooting Guard Luke Kennard was dealing with his own injuries and only played in 18 games. This team is an absolute disaster and it will be hard for them to attract a stud player in free agency. This team was literally a revolving door for players. They were led in scoring and assists by Derrick Rose . Rose also missed 16 games this season. The Pistons will need to spend the next few years rebuilding and they are going to have to make a huge decision this summer. The one positive light for them has been Christian Wood . With Drummond, Griffin and Morris out of the way, Wood was able to capitalize. Wood scored at least 20 points in 8 of his last 10 games. He was became a leader for the team and now the Pistons have to decide whether or not to pay Wood in the offseason because other teams have shown interest in him. They will have to wait and see what the exact demand is for him. Wood can hit shots from all over the floor and play inside. Wood can easily be considered the biggest breakout player of the second half of the season. There aren’t a lot of other options on the team so he was able to take advantage. They didn’t want to pay Drummond if he opted out (the league’s leading rebounder), will they also balk at paying Wood? We will have to see, but they will be starting from scratch. Rose will be returning to the team next season.

Sitting at the bottom of the Eastern Conference are the Cleveland Cavaliers. It’s really hard to believe that just two years ago, the Cavs and Golden State Warriors were battling it out in the Finals for the fourth season in a row and now both teams are at the bottom of their respective conferences. Unlike Detroit, the Cavs have a few building blocks to the future. Their backcourt is set. Collin Sexton led the team scoring 20.8 points per game and rookie Darius Garland started to breakout in the second half of the season. The Cavs issues stem from Kevin Love ’s fat contract. After this season, he’ll be owed over $90 Million dollars over the next few years and because his health has been an issue in the past, other teams aren’t rushing to invest in him. The Cavs will have to decide whether or not to retain Andre Drummond . He may opt out of his current contract. He is going to want a maximum contract and it’s very up in the air regarding what Cleveland will do. It was very head scratching why they even traded for him. They hadn’t been competitive and trading for Drummond proves to me that they may look to work something out and combine their youth in the backcourt and veterans up front. Drummond’s player option is over $28 Million dollars. Larry Nance Jr. has been good off the bench and can fill in at Power Forward and Center. They are going to move on from Tristan Thompson in the off-season. They can use a bit of help on the wings. They got their three big men and two young and hungry guards and then there’s Kevin Porter Jr. He was an impressive rookie who played big off the bench. The Cavs see a lot in him for the future and could be leading the offensive charge off the bench next season. He’s quick and attacks the rim with force and can pull up and hit three-pointers. He can fill-in at either guard spot and grabbed nearly a steal per game. They need a better defensive wing player than Cedi Osman and they will have to sign a winger for cheap in the offseason or draft one. Even with the lottery odds evened out a bit more, they will be in the mix for a top draft pick.