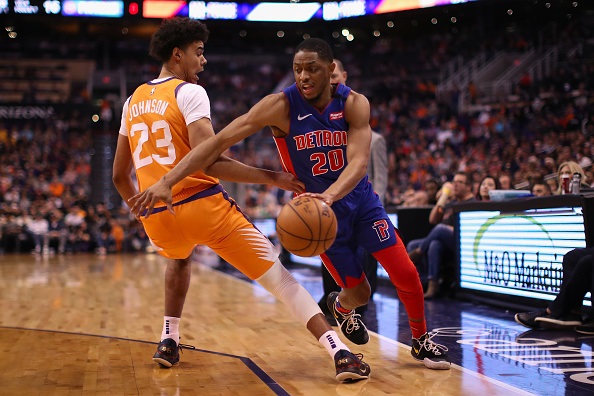 It’s almost time for the Fantasy NBA Playoffs and you must start looking at your roster composition on a per week basis. Keep yourselves ahead of the game by looking for players with more games each week. Get that production that you need to maximize your team’s potential and look at the teams who are heading to the lottery and watch their rotations continue to open up. Just because those teams are bad and aren’t heading to the playoffs, it doesn’t mean that we don’t consider them. Every team brings new opportunities to you.

Brandon Knight G DET-21% Ownership: Even though Knight is dealing with a minor Hamstring injury, but the Pistons need all of the help that they can get to score points and with Derrick Rose and Luke Kennard still out, Knight has been thriving. Bruce Brown being back in action hasn’t taken away from him, for now. Knight has scored in double figures in his last six match ups and he should have a safe floor for at least the next week or two. When Kennard comes back, it’ll be interesting to see if Knight loses a lot of minutes and shots. Knight has also grabbed three or more boards in two of his last three games. Knight has grabbed steals in three of his last five games. He can play effectively at either guard spot and he can facilitate the offense if needed. He’s dished four-plus dimes in four of his last five contests. Knight will take a good amount of three-pointers when he is playing off the ball.

Dewayne Dedmon C ATL-37% Ownership: We still don’t know when we’ll see Clint Capela take the floor again and Dedmon could be in line for more minutes and shots for the rest of the season. Bruno Fernando doesn’t make too big of an impact on offense and even when Skal Labissiere returns he shouldn’t impede much on Dedmon’s minutes. He’s grabbed six or more boards and a steal in his last two games. He was dealing with an Elbow injury but the injury seems to be behind him at this point. He should be able to continue getting 20-plus minutes in this rotation. Dedmon can also compliment John Collins by popping outside at the arc and burying three-pointers. Once you see his minutes dip consistently below 20 minutes, it’s time to pick another option, but for now, view him as a week-to-week short-term solution. He has a good build and should be able to have his way in the post, but sometimes he has games in which he hangs at the arc a bit much.

Juancho Hernangomez F MIN-34% Ownership: He was in the Waiver Wire Article a month ago and it’s still very shocking that Hernangomez isn’t owned in more leagues. His spot in the Timberwolves rotation is completely solidified and he’s been starting consistently. What other proof do we need? Plus, Karl-Anthony Towns is still out for another few weeks. Hernangomez has improved his rebounding grabbing at least seven in each of his last five games. He scored in double figures in four of those games and he can hit long-range jumpers if needed. Hernangomez won’t be used as a bailout option as he has a strong attack to the rim and he’ll draw contact. He’s very scrappy on defense and will grab steals in the lane. Hernangomez has grabbed steals in five of his last six games and we should regularly expect him to play 30 minutes per game in the Timberwolves rotation.

Trey Lyles PF, C SAS-19% Ownership: View Lyles as a short-term solution for now because both LaMarcus Aldridge and Jakob Poeltl are still injured. Aldridge should be back in the next few games, but Poeltl will likely miss another week or two. Lyles and Rudy Gay are pretty much all that the Spurs have left for frontcourt players. Lyles has scored 19 or more points, taken 12 or more shots and grabbed steals in three of his last four games. Lyles will hit outside shots and set up there to start and let Gay play in the post, but Lyles has size and he’ll need to fight for inside positioning on both sides of the ball. Lyles has blocked shots in three of his last four games. With the steals and blocks production it has been helping him hold up value because he doesn’t always grab a lot of boards. He has grabbed six or more in three of his last five contests.

Donte DiVincenzo G MIL-24% Ownership: George Hill is still dealing with a Groin injury and that should give DiVincenzo a little more run. He has done everything he can to fill the void Malcolm Brogdon left behind when he went to Indiana. We shouldn’t have to worry about him not getting 20 minutes per game. DiVincenzo plays good defense and he has recorded a block in his last four games. He also has been rebounding better in recent games grabbing five or more in six of his last seven games. If the defensive stats weren’t enough, DiVincenzo has scored in double figures in his last three match ups and he will even help run the point and he’s dished three or more assists in his last six games. It’s been great seeing him take more shots and if Giannis Antetokounmpo needs to sit with an injured Knee, DiVincenzo should see more shots. He can play effectively off the ball as well.

Aron Baynes C PHX-24% Ownership: There’s still no sign of when we’ll see Frank Kaminsky return to action and Deandre Ayton has been a bit banged up and all signs are pointing to Baynes getting more usage for the next few games. He’s coming off of a game in which he scored 37 points and grabbed 16 boards and this could only work out for you for another week or two. The Suns are dealing with injuries all over and Baynes should see 20-plus minutes for his next few games. If his minutes drop, release him. He won’t always have huge scoring nights, but he’s a constant shooting threat from the outside and he has hit 1.4 three-pointers per game this season. Baynes has toughness and the Suns need to let him play in the post a bit more on offense. He’s grabbing 5.7 rebounds per game this season and if Ayton has to continue to sit, expect those rebounding numbers to go up a bit. It’s hard determining if Baynes has any long-term appeal, but if the scoring and rebounding are there, keep him as a last bench spot, but don’t expect Ayton to get shutdown this year considering he missed a lot of games earlier due to being suspended. 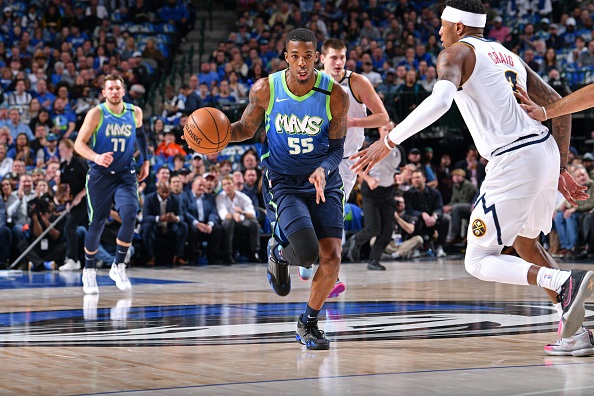 Delon Wright G DAL-40% Ownership: It hasn’t been the easiest season for Wright, but with Jalen Brunson and Seth Curry hurt, he should be able to pick up more minutes. Wright has scored in double figures in his last two games and he’s not totally reliant on hitting long-range jumpers. He can drive with the ball. His challenge will be getting the ball out of Luka Doncic (who may not be 100 percent right now with the Thumb injury) and Tim Hardaway Jr. who isn’t the healthiest right now. The next week of action will be a good test to see where exactly Wright fits into the rotation. Playing next to Doncic is no easy task because he’s very ball-dominant. Wright has grabbed six or more boards and multiple steals in three of his last four games and the Mavs could use more scrappy defenders. Wright will get some time to play on the ball over his next few games and he’s produced four or more dimes in his last four match ups.

Dario Saric PF, C PHX-29% Ownership: Unlike Aron Baynes , Saric has a bit more safety attached to him and he certainly has more long-term appeal. We’ll need to see when and if Kelly Oubre Jr. returns to action because that will impact Saric from the offensive side of the ball. Mikal Bridges could take a few minutes from him, but he’s not as much of a threat offensively and that could save Saric’s shots for the rest of the way. If Deandre Ayton misses more time that will also benefit Saric. Saric is a “UFO” in the NBA. It’s hard to tell which position suits him best. Saric has hit double-digits in scoring in five of his last six games and he’s even grabbed eight or more rebounds in three of his last five games. He can hit shots from downtown. Consistency hasn’t been one of Saric’s strong suits, but the opportunity has presented itself for him to grab more shots in the offense. Saric has blocked shots in two of his last three games.

Jeff Green F HOU-2% Ownership: Green has been a fringe fantasy option for most of his career, but when he’s hot, we can give him a shot for a week. He is the definition of short-term solution. Green is good at running the floor on transition. If Eric Gordon needs more time for his Knee to recover, Green could see more shots. He’ll set up at the arc a good amount to start. He’s scored 17-plus points in his last two games. Russell Westbrook being back in the mix could hinder his scoring, but Robert Covington and P.J. Tucker need help in the post as the Rockets try to prove to the rest of the NBA that they don’t need a true Center in order to compete (they are wrong about that). Green is another player who will help a ton on transition because of his speed. On defense, he’ll help with steals as he’s swiped the ball in each of his last three games. He’s even been helpful blocking shots as he’s recorded a swat in three of his last four contests.

WILD CARD PICK UP: Royce O’Neale SF UT-7% Ownership: Kind of like Dorian Finney-Smith , O’Neale is a minutes-eater and has a very safe floor when it comes to playing time. Consistent production has been a challenge for O’Neale all season. Even though he doesn’t always score in double figures, he has been helpful enough in other areas to qualify him as a “wild card”. Don’t forget that O’Neale can also help run the point. He normally benefits more as an injury-replacement player, but lately, he’s dished at least three dimes, grabbed six or more rebounds and blocked shots in three of his last four games. If you need help in those specialty statistics, O’Neale has four games this week and can help add to your boards and dimes. If you are looking for more of a scorer, go in a different direction. He’ll help with steals at times, but we can’t fully rely on him grabbing them each game. It’s been encouraging seeing him record blocks lately.