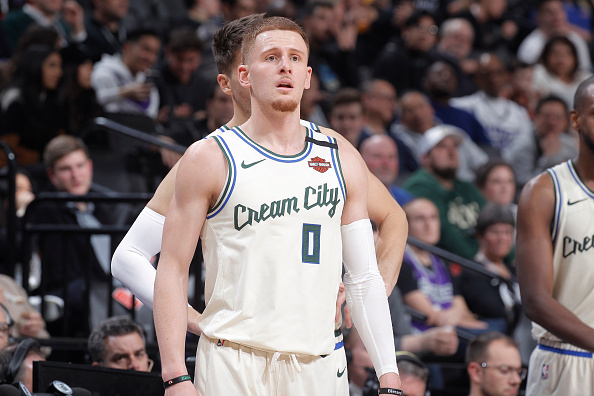 After not seeing any trades for a year, we have seen a few in recent weeks and more will follow. Teams will trade draft picks and bad contracts to dump salary and every time a trade is made, all rotations involved will be impacted and it will continue to open playing time for younger players who have been riding the bench the entire season. Teams out of contention will begin opening their rotations up further in the next month. Stay ahead of the game. The Timberwolves might not be done making moves.

Nerlens Noel C OKC-40% Ownership: Noel won’t put up flashy stats consistently, but the Thunder's lack depth up front and Noel’s defense will keep him in games. Steven Adams isn’t 100 percent and Noel could have more life in the Thunder’s rotation. Noel is good at blocking shots, and he’ll score off of put backs and when opposing defenses collapse on the driver. The Thunder’s mid-court doesn’t make an impact on offense besides Danilo Gallinari who has had his own health issues this season. Noel has scored in double figures and grabbed at least five boards in his last two games. He’s also grabbed steals and blocked multiple shots in his last two games. Noel won’t always hit the 10-point mark, but he helps out enough with grabbing boards, steals and blocks to save value. I don’t normally recommend picking up players who don’t play 20 minutes per game, but, Noel is an exception because of the Thunder’s lack of big men and if Adams misses more time, he’ll hit that 20-minute mark. 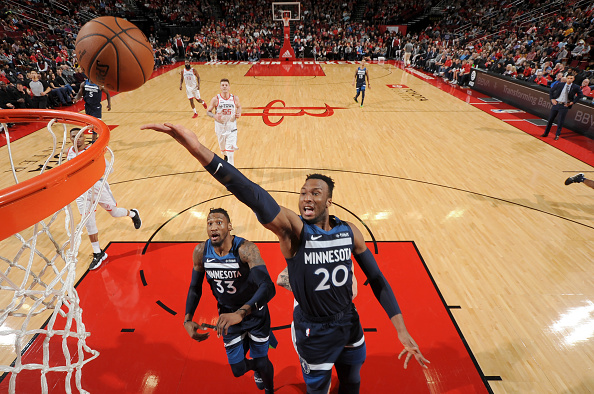 Josh Okogie G MIN-4% Ownership: The Timberwolves-Hawks trade involving Jeff Teague directly impacts and benefits the rest of the Timberwolves guards. I put Shabazz Napier in the waiver wire article last week and he’ll see a major increase in usage with no more Teague or Treveon Graham to deal with. Jarrett Culver was also covered in previous articles and he’ll get a bigger piece of the pie. Okogie will see more back up minutes and he’s played at least 22 minutes in his last six games. He’ll not only hit shots from deep, but he has no fear driving the lane and will serve as a good change of pace option off the bench. He can even help bring up the ball. Okogie’s defense will keep him in the game as he’s grabbed 4.4 boards per game and he’s grabbed steals in every game in January. We’ll have to see in Allen Crabbe ’s arrival has an impact on Okogie’s minutes but if the Timberwolves were smart, they would let Okogie get at least 23 minutes in their rotation moving forward. He’s even blocked shots in five of his last six games.

Donte DiVincenzo SG MIL-16% Ownership: It was very head scratching why DiVincenzo isn’t given more love in the Bucks rotation. As much as Wesley Matthews and Pat Connaughton are good three-and-defense options, DiVincenzo has more in his arsenal. He’s a very good ball-handler and he’ll always sacrifice his body chasing loose balls. DiVincenzo has scored in double figures in five of his last seven games and if he’s on the court with Khris Middleton , he’ll get fed through back-door cuts to the basket. DiVincenzo is very aggressive on the perimeter and he’s grabbed multiple steals in five of his last six games. He’s even blocked shots in two of his last three games. DiVincenzo will also help grab long rebounds and he’ll give you three to four per game. The Bucks have a lot of ball-handlers and that will often take DiVincenzo out of producing a good amount of assists consistently, but he can bring up the ball if needed and if one of the Bucks guards goes down, he’ll get more playmaking responsibilities.

Luke Kornet PF, C CHI-13% Ownership: Injuries continue to plague the Bulls this season and after losing Wendell Carter Jr., now Daniel Gafford is out for a few weeks and besides Lauri Markkanen , the only other options the Bulls have in their front court are Luke Kornet and Cristiano Felicio and Felicio can’t be relied on. Kornet is a different story because of his shooting range. If the Bulls had any sense, they would put Markkanen exclusively in the post for a while and let Kornet handle stretching the floor because of his ability to hit three-pointers. We all know that’s not going to happen though. Kornet will still see between 20-30 minutes per game and he’s scored in double figures in four of his last five games. The Bulls are literally out of options and Kornet will see his scoring and rebounding numbers improve for the next few weeks. Kornet will also block shots consistently. He’s swatted away shots in his last six games and he even grabbed steals in three of those games.

Eric Paschall F GSW-27% Ownership: Paschall is hot from the field again and he’s been rewarded with more playing time. He’s hit the 30-minute mark in 2 of his last 4 games. Paschall has benefitted with getting more plays called for him because of Draymond Green ’s finger injury. Glenn Robinson III has been banged up as well and Paschall can rotate to both forward spots. Paschall has grabbed steals in two of his last four games and recently posted a five-steal game. Paschall will hit shots from the outside, but if Green has to miss more time and it will force Paschall to have to play more in the post. He’s grabbed at least five boards in four of his last five games and he has thrived in the past when Green has been off the floor. Expect him to see playing time in the late 20’s in his next few games.

Anfernee Simons SG POR-4% Ownership: Simons is about to receive a big consistent minutes boost with Kent Bazemore traded. Trevor Ariza (acquired by the Blazers in the trade they made with Sacramento) will handle both forward spots and Simons can steal a few Small Forward minutes. CJ McCollum is also hurt and Simons will see more shots backing him up. In his first game since the Blazers made the trade, Simons was able to score 12 points for the first time in 6 games. Simons can help run the point alongside Damian Lillard and don’t be surprised if you see him steal starts over the next few games. Simons has also grabbed three or more boards in four of his last five games. He has good speed and isn’t afraid to drive the lane when it’s semi-open. Simons is committed defensively as he’s also grabbed steals in two of his last three games. He was already getting a true rotation commitment playing over 22 minutes per game and with the roster changes and ongoing health issues that the Blazers have dealt with will benefit Simons and give him more room to breathe in the rotation. 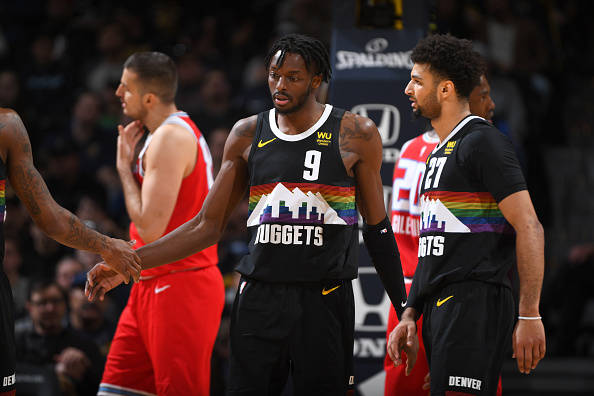 Jerami Grant F DEN-20% Ownership: Denver wasn’t the best landing spot for Grant because they are the deepest team in the league and there are a lot of players looking to steal minutes at all spots. With Paul Millsap and Gary Harris banged up, players such as Michael Porter Jr., Malik Beasley and Grant have been able to get more mid-court minutes. Grant earns his minutes because of his defense and has recorded three multi-block games in his last five. It’s hard to tell when we’ll see Millsap back on the court and Grant will continue seeing more minutes. He has played 30-plus minutes in 3 of his last 5 games. Grant has also grabbed at least four boards and a steal in three of his last five games. He can hit long-range jumpers and set up in the high post. He isn’t afraid to get physical and he should be able to improve his rebounding stats over the next few games. Grant has a few advantageous match ups coming up once he gets through Indiana on Sunday and he should be able to put up multi-category production against Minnesota, Houston and New Orleans.

Monte Morris PG DEN-14% Ownership: The Nuggets mid-court isn’t the only part of their game missing players as they are also down their Floor-General Jamal Murray and Morris is about to see a boatload of minutes and starts until Murray is ready to return to the lineup. Morris has incredible speed and will keep the Nuggets offense moving at a quick pace. He can stop and pop even on the drive to give himself high-percentage shots. Opposing defenses on transition often think that the driver on offense will drive right to the basket, but smart guards will stop and shoot with no defender around them. Morris has scored in double figures and dished at least four dimes in three of his last four games. Expect him to take more shots with Gary Harris also sidelined. His scoring should improve with Murray off the floor. Morris has produced 3.3 assists per game this season and that number should improve over the next few weeks.

Willie Cauley-Stein PF, C GSW-38% Ownership: The path seemed to clear up for Cauley-Stein a bit until the Warriors brought back Marquese Chriss into the fold. Chriss will be in a timeshare at Center, but he should still be able to see enough minutes to produce. Cauley-Stein has scored 10 points and grabbed 6 rebounds in his last 2 games and he’s even grabbed steals in his last 3 games. Draymond Green being out will also give Cauley-Stein more room to play. Sometimes I think Cauley-Stein is a more suitable Power Forward than Center because of his shooting range. He can hit mid-range jumpers and he’s good at grabbing loose balls in the lane. He’s also blocked shots in two of his last three games. Cauley-Stein doesn’t call for the ball a lot and is often just a big body out on the floor, but if Green misses more time, don’t be shocked to see Chriss and Cauley-Stein on the floor together at times. Omari Spellman will also be in the mix to grab minutes, but he can operate better from the Power Forward spot.

WILDCARD PICK UP: Cam Reddish G, SF ATL-9% Ownership: Reddish truly is wild because of his shooting numbers. He has trouble putting up consistent scoring efforts and it will be interesting to see if he loses some of his minutes to new arrivals Jeff Teague and Treveon Graham . Reddish’s last four games are very telling because he scored in the 20’s in 2 of them and then single-digits in the other 2. Reddish does reach rebounding relevancy standard for guards because he grabs 3.6 boards per game. Reddish will help grab steals on the perimeter and if he keeps putting up multi-steal games as he has in two of his last four, he’ll get even more playing time. Reddish has hit the 30-minute mark in 3 of his last 5 games. Trae Young logs a lot of minutes, but when he does take a breather the Hawks will look to Reddish to bring up the ball a bit. The good news for Reddish is that Young and Teague don’t play good defense and if Reddish can shut down opposing guards on the perimeter, he’ll close out games more moving forward.