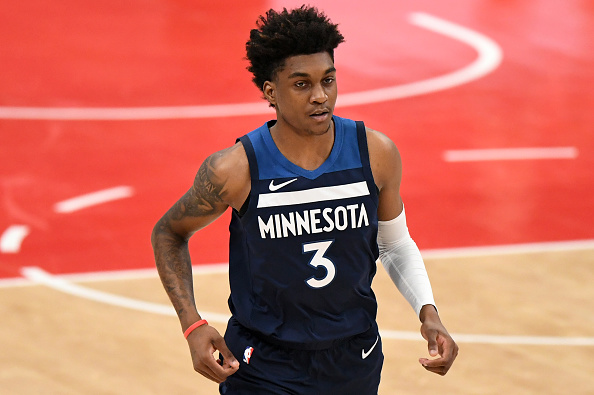 As the conclusion of the regular season draws near, teams that are out of it could start benching their veterans for the rest of the season to give younger players more reps. Players that are considered “franchise-building pieces” on teams at the bottom of the conference could be held out to avoid major injury. The Thunder benched Al Horford for the rest of the season and Shai Gilgeous-Alexander is currently injured and could very well be held out the rest of the way as well. Be aware of this because you’ll need to act fast. Continue looking at stats from a smaller sample size. Look how players did in the last two weeks to find the trendier players.

Jaden McDaniels PF MIN-37% Investment: While his stats have been up and down, McDaniels has proven that he can handle the PF position and help stretch the floor. The Wolves have had PF trouble all season and McDaniels has scored in double figures in five of his last seven games. He’s a three-point shooting threat who doesn’t only rely on trey’s, but also on working the elbow. McDaniels has been helpful on the defensive end and the ‘Wolves play very poor defense. There’s no reason why his minutes should drop below 20 the rest of the way. He’s grabbed five or more boards in four of his last five outings and he’s even blocked shots in three of his last five games. Malik Beasley being out could give McDaniels more shots.

Tony Bradley C OKC-4% Ownership: Moses Brown won’t be available in most leagues, but we’ve seen Tony Bradley ’s minutes get boosted since joining the Thunder and he should be able to get 20 minutes per game for the rest of the way. He’s played 22 or more minutes in his last three games and grabbed at least 8 rebounds in two of the games. He’s just a big body that will do the dirty work under the basket. The Thunder forwards will play more out on the arc and Bradley will have room to work. Bradley has blocked shots in each of his last four games. He’s been on the cusp of double-digit scoring and he should see seven to eight shots per game for the rest of the way. He’s a good final big man off the bench and he has the back up job all to himself.

Nicolas Batum F LAC-33% Ownership: As much as Batum frustrates me in reality as an NBA player, he’s put up the stats to warrant a final spot on fantasy benches. Batum has grabbed steals and blocked shots in three of his last four games. Serge Ibaka being out has allowed other PF/C’s on the Clippers have to stretch to C to help back up Ivica Zubac . Batum plays over 28 minutes per game and he’s grabbed at least six rebounds in four of his last six games. He has no issue firing shots from downtown, but if he’s not hitting, the ball will be taken out of his hands. He’s also dished three or more dimes in four of his last five battles. When Kawhi Leonard sits for games, he will get an even longer leash and without having too much depth up front, Batum will stay in the Clippers rotation.

James Johnson PF, C NO-28% Investment: With Kira Lewis Jr. and Nickeil Alexander-Walker a bit banged up, Johnson could see more time with the ball behind Lonzo Ball . Remember, Josh Hart is hurt and there are open reserve minutes in New Orleans. He’s scored 16 or more points in his last three outings. Johnson blocked seven shots total in his last three contests. H’s also swiped multiple balls in his last two games. He should continue seeing playing time in the late-20’s moving forward. Johnson gives this near-defenseless team more help clogging up the lane. He should be seeing eight to 10 shots per outing as well. Johnson’s versatility and ability to play multiple positions should keep his minutes up moving forward. He’s dished three-plus dimes in his last two contests.

Jalen Brunson G DAL-30% Investment: Brunson see’s a usage bump with Kristaps Porzingis off the floor and he should certainty see more games with double-digit shots until Porzingis returns. Brunson has scored at least 15 points in each of his last four games. He grabbed four or more boards in three of those contests. Brunson will toggle between running the point and being the off-guard standing on the other side of the arc of Luka Doncic . Brunson has grabbed steals in three of his last five games and posted three or more assists in his last six contests. We’ve seen Brunson’s minutes go up in recent games and he’s hit the 30-minute mark a few times recently. Brunson has taken ten or more shots in four of his last six battles.