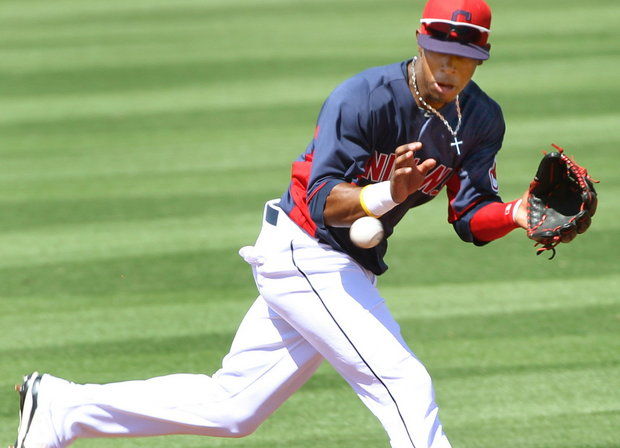 More often than not, MLB scouts fall in love with one or maybe two skills that a prospect possesses and decides that because of those attributes a player will develop better peripheral skills also. Francisco Lindor is a very solid young player no doubt. But it is very possible that coaches and some talent evaluators are enamored with his personal makeup far more than anything he has done or can do on the baseball field.

Lindor doesn’t possess any single skill or set of skills that pop off of the page or screen. But he does a little bit of everything and always seems to be on the spot in key situations which is a coach’s dream.  On the plus side, Lindor has a good approach at the plate and makes square contact quite often. He showed more power in 2014 after adding some muscle in the offseason but will rarely hit double digit HR’s at the major league level. He is comfortable switch hitting but is far better from the right side then he has shown from the left. This trait usually leads to a much lower batting average overall once a prospect reaches the big leagues.

Defensively, Lindor is a slick fielder with a strong arm. He will get to most groundballs and has the tools to turn a strong amount of double plays. He possesses a high baseball IQ and is terrific at anticipating where the play is going to be. He will stick and have a very solid career at the SS position.

Another questionable tool of Lindor’s is his speed. I would grade him as above average speed but his baseball acumen and anticipation allows him to seems quicker than he really is. His home to first and second to home times are very good but he’s had a lot of trouble stealing bases. Lindor has been thrown out 35 times in 115 steal attempts in the minor leagues which is an abysmal 70% success rate. He will run in the big leagues but will struggle to swipe more than 20 against far superior pitchers and catchers.

Francisco Lindor was raises in a baseball family. His parents moved him to Florida as a youngster in order to give him the best teachers and opportunities available. He is a very humble young man that puts in a lot of time and effort both in season and off. Coaches and teammates love his conviction and enthusiasm.

As much as everybody like Francisco Lindor there is a lot of questions on whether he is actually better than Jose Ramirez right now. The Indians put a lot of stock in their hitters ability to get on base and Lindor still struggles in that capacity. Also, he has not shown the ability to hit right handed pitching while in the minor leagues and that very likely will limit his AB’s once he does join the tribe.

In a perfect world, Lindor ends up making a jump in getting on base and hitting against RHP this spring. If he can do these two things along with continuing to show a strong defensive presence, there is a good chance that he in on the Indians final 25 man roster at the beginning of April. But if he continues to struggle in either or both of those two areas he will start the season playing everyday at Columbus.

To me Franciso Lindor has the upside of an everyday SS who hits in the two spot. He handles the bat well enough to move runners over and can lay down a bunt when called upon as well. He will never be any kind of run producing threat or power hitter at the big league level. But he is a winning ballplayer who will make his team better. He could end up carving out a nice career as a fan favorite of a losing organization. He has that Greg Gagne/Ozzie Guillen feel as an upside right now.

Omar Infante – Nobody wants to hear their top prospect has the upside of Omar Infante but this is the case with Lindor. Infante does a little bit of everything and has carved out a niche for himself as an everyday player for every teams.

Orlando Hudson – Remember Orlando Hudson? Everytime I see Lindor play I am reminded of Hudson who was also a switch hitting player who could do a little of everything on the field.

Francisco Lindor has an average draft position of 385.66 according to the National Fantasy Baseball Championship (NFBC).

He was undrafted in the F.S.T.A. Fantasy Baseball League Draft in January.