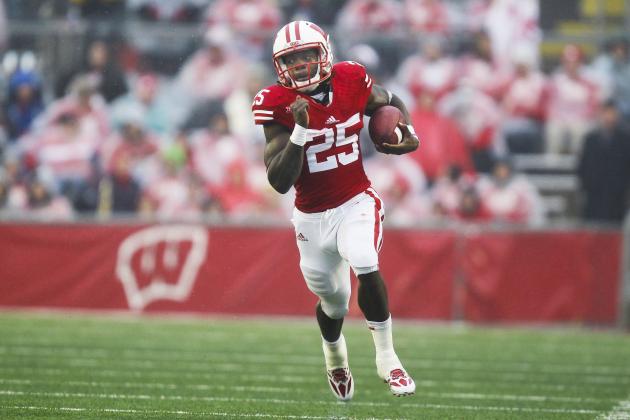 The running back position at the college level had a historic season in 2014. Two rushers ran for over 2,000 yards, nine rushed for 20+ TD’s and eight running backs averaged over 7.0 yards per carry. Wisconsin’s Melvin Gordon set the single game rushing record while stomping all over Nebraska to the tune of 408 yards on the ground. The very next week however, Oklahoma’s Samaje Perine outdid Gordon while rushing for 427 yards against Kansas. So as you can see it was a real prolific season for college running backs.

The problem is that after watching the individual workouts of this collection of college RB’s, there was quite a bit of disappointment. While nobody broke Chris Johnson’s 40 yard dash mark of 4.24 set in 2008, really nobody came even close. Not a single RB ran under a 4.42 and only three ran under a 4.50. It was a very slow combine for RB’s that is for sure.

Remember that when it comes to running backs we are not looking only for speed. In fact, straight line speed is WAY overvalued at the combine for RB’s. The ideal size for an NFL RB is between 5’9” and 5’11” tall. The ideal weight for an NFL RB is 210-225 lbs. Any shorter and they are likely to break down and any taller and they are too slow and provides too big a target for opposing defenders. Taller RB’s also tend to develop fumbling problems at the pro level because there is just too big a target. Go ahead and research this trend. Find me more than a handful of productive NFL RB’s who don’t fall within these parameters. You can’t because a professional RB has a very specific look and skill set.

Let’s take a look at how this crop of college RB’s fared at their individual drills. We’ll highlight just the main drills that provide us the most useful data possible.

Here is a breakdown of how the top RB’s in this year’s draft measured up at the 40-yard dash:

See what I am talking about here? Disappointing. Not only did the consensus top RB, Melvin Gordon, run a very pedestrian 4.52 but the other two expected RB’s Todd Gurley & Tevin Coleman weren’t healthy enough to run. You are going to see the name David Johnson quite a bit here as he quite possibly had the best combine of all the invited RB’s. Johnson also had a very good Senior Bowl performance which has raised his draft stock considerably.

Now let’s take a look at lateral agility which is measured by the three cone drill. To me, this exercise is more telling than the 40 yard dash as it tests a RB ability to move around defenders instead of just past them.

Here is the RB breakdown for the 3 cone drill

Ameer Abdullah showed quite nicely at the end of the 2014 season and now here at the scouting combine. But there are serious questions about his size and ability to take the beating at the next level. Abdullah will likely wind up playing a third down type of role in an NFL offense though as the cone drill shows he could have a better future in a cut-back type of blocking scheme.

The shuttle run shows a runners ability to stop and start which is imperative in order to succeed at the next level. They ran RB’s through both the 20 and 40 yards shuttle runs at the combine but for our purposes we will only take the 20 yard shuttle run performances.

Here are the RB rankings according to the 20 yard shuttle run:

Again some very underwhelming numbers from this years group of running backs. Northern Iowa’s David Johnson and Miami’s Duke Johnson are proving to be both laterally and straight ahead fast while the rest of the crop are just very pedestrian.

Another vital attribute for NFL running backs is toughness. There is not another position in all of sports that take a bigger beating than an NFL RB. These guys have to be able not only to take a beating but also dish one out. Guys who cannot run through arm tackles or move the pile in short yardage situation do not last in this league.

While there is not direct way to test a players ability to take a beating it is always good to see just how physically strong these guys are.

So finally we get to some impressive numbers by this years RB collection. These are some strong players here lead by Hawaii’s Joey Iosefa who will likely be converted to FB at the pro level. But here again is the name David Johnson who has now proven to be not only one of the quickest runners in this years class but also one of the strongest. He has likely moved up into the second or third round area thanks to his combine showing.