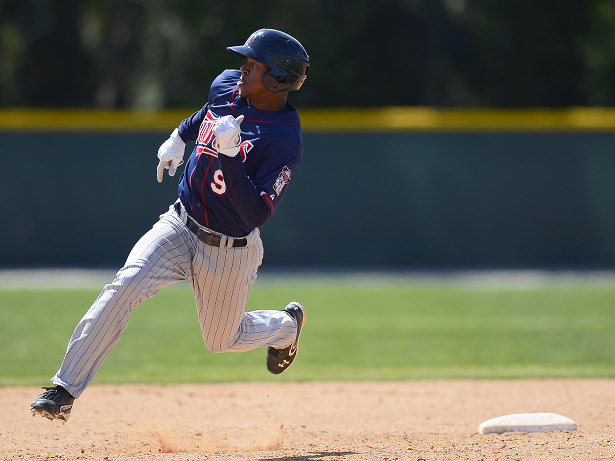 There are no sure things in life. Well, death and taxes but even that latter you can get away with from time to time. Byron Buxton was the next “can’t miss” prospect a year ago at this time and despite plenty of reasons (mostly injury related) his 2014 campaign simply wasn’t good enough. The good news is that Buxton is the type of player and person who will not let one or even multiple setbacks define him. He is not one for excuses either which, was one of the reasons he played at far less than 100% at times in 2014. Despite the down year, Buxton remains on track as one of if not the best prospect in major league baseball.

Buxton was a pitcher in High School but has far too good of tools to play once every fifth day. His speed rivals that of Billy Hamilton and his home-to-first time is on par with what Hamilton’s is from the left side. Buxton is a right handed hitter. Defensively he is a natural centerfielder with the instincts of a young Willie Mays. That is no joke either; he is that good reading the ball and possesses a rifle of an arm as well. Buxton is a patient hitter at the plate and isn’t afraid of taking a walk. He has a natural ability to lure the pitcher into giving him what he wants then capitalizing on it. He hits to all fields and doesn’t try and over swing on hangers. Buxton doesn’t profile as a big power hitter but he has already surprised coaches with his ability to drive the ball to all fields. He has a big frame and could use some more upper body mass to help fight through injuries.

The Twins will invite him to spring training and allow him to showcase his skills before assigning him back to the minor leagues to begin the 2015 season. Buxton must be able to stay healthy in order to get a pass on his disappointing 2014 season. If he continues to come down with injuries, this will greatly affect his status as an elite prospect moving forward.

After a relatively healthy 2013 season, Buxton had a disastrous 2014 campaign. He began the season by injuring his left wrist while doing outfield drills at the Twins spring training complex. That cost him some precious spring training at-bats as well as the first month of his minor league season. It also cost him a spot at Double-A. Instead, Buxton was sent back to Fort Myers for what was going to be a quick ascension through the Twin system. But he reinjured his wrist in the first week which cost him the next two months of the season. Then he was hit on the other wrist with a pitch and missed another few weeks. When he returned to action he was quickly elevated to Double-A where in his first game he had a terrible outfield collision which resulted in a severe concussion and the end of his 2014 season.

Buxton played in the Arizona Fall League where he again suffered an injury this one a dislocated finger. All of his injuries appear to be random in nature but there is only so much bad luck at athlete can attribute before that becomes a part of who he is. Buxton will be with the Twins in spring training and will see plenty of Grapefruit League action. Assuming that he can stay healthy and show them more at the plate than he did last season, he will start the season at the Double-A level. That being said, if he can regain his form I would not be surprised if Buxton was among the first wave of call-ups by the Twins as early as June. The team would like to attach Buxton’s future to that of fellow highly rated prospect Miguel Sano but that may simply be wishful thinking. Despite his massive upside, Buxton should not be taken in fantasy drafts this year. Ideally, he’ll be a great grab off of the waiver wire sometime in late May.

Carlos Beltran – There hasn’t been a better power/speed/defense prospect to come along in quite awhile.

Willie McGee – If his power never develops Buxton can still be a very good player for a long time in the Willie McGee mold.

Buxton has an average draft position of 420.39 according to the National Fantasy Baseball Championship (NFBC).

He was drafted in the 29th round (365th overall) in the F.S.T.A. Fantasy Baseball League Draft in January.