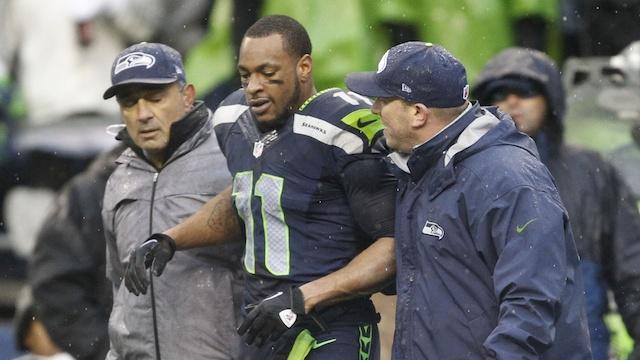 Let’s see what is going on in and around NFL Training Camp on this Tuesday August 12th:

A Note About Depression

It was real sad hearing of the passing of Robin Williams by his own hand yesterday. The outpouring of affection from fellow celebrities and legions of fans makes you wonder how somebody that is beloved by so many can feel so alone.

Depression is a hell of an illness. I never knew it but I grew up in a home full of depressed people and it is a lifestyle that never really goes away despite all of the good that may come. From the outsiders perspective it is impossible to understand. But for those of us who have seen the impact depression can cause on even the kindest and talented of souls, it makes us sad.

I asked my wife to marry me during the previews to a Robin Williams movie, “What Dreams May Come.” A movie that was probably one of his least regarded works yet still a character in Chris Nielsen who we gush empathy for after he loses his wife. My Father worked the camera for my videotaped proposal that came on just before the start of the movie to a full house of surprised moviegoers. He would pass on just a year later after a long battle with cancer and that tape means more to me than most anything in this world.

Robin Williams was a brilliant actor. I honestly didn’t like his stand-up comedy much but his comedic acting and especially his dramatic work is off the charts. At 63 years of age and with all of the fame and fortune I guess that he was never quite comfortable in his own skin. In honor of his passing I present to you a special Top 5 Robin Williams Characters List:

4) Genie – “Aladdin” – An over the top animated character that somehow gets us feeling guilty for his permanent captivity. So much depth for a silly animated film and one that takes on a whole new tone now.

1) Dr. Malcolm Sayer – “Awakenings” – One of the most overlooked movies ever. Williams and Robert DeNiro were both amazing in this one and it broke the heart of even a very young Jeff Mans.

There is a song that I heard shortly after my Mother passed away that from time to time I put on a loop and remind myself just how torturous life can be. My Mother suffered from severe depression for the last twelve years of her life. The chorus of this song sums up just what to me how impossible the grips of depression can be from the outside looking in.

I don’t know what was a more rare sight at Seahawks camp today, Percy Harvin participating in practice or Percy Harvin limping off of the field. Although Harvin did eventually return to the field he did not participate in any more drills this afternoon. The team is calling it an mild ankle sprain for pretty boy Percy and his status will be day-to-day for right now.

A couple notable injuries on the defensive side of the ball today. The Broncos will be without the services of LB Danny Trevathan for a minimum of 6-8 weeks after he crumbled with a knee injury during practice today. The good news is that he appears to have avoided any ligament tears and rather has a fracture in his knee that will sideline him. Trevathan was the Broncos leading tackler last season and a big part of Jack Del Rio’s 4-3 defense.

The Chiefs should be getting concerned after All-Pro safety Eric Berry left another practice due to tendonitis in his ankle. This is the third time that Berry has either missed or left practice early due to the same issue and one has to wonder just how he will hold up once the lights go on in the regular season.

Back In The Saddle

A couple of starting RB’s were back at practice for their teams this afternoon. Toby Gerhart returned to Jaguars practice this morning after missing almost a week due to a hip flexor injury. The team says they expect Gerhart to “get some reps” during the Jaguars Thursday night against the Bears in Chicago.

In Falcons camp, veteran RB Steven Jackson was back in pads although not participating fully after missing the first two weeks with a hamstring issue. Anyone who is watching the HBO show Hard Knocks can see the writing on the wall that S-Jax obviously has other interests beside football at this point in his life. I would bet the farm that Jackson touches the ball less than 125 times this entire season.

Although you can’t call him a starting RB any longer it was still good to see Knowshon Moreno on the practice field for the first time this summer today. Lamar Miller is still heavily entrenched as the RB1 for now but a healthy Moreno could push Miller for the job at some point during the season. Moreno’s knee conditions are troublesome not only for Dolphins fans but also for fantasy owners who were thinking of parlaying his success in Denver last year into something more.

Don’t You Forget About Me

Gates is having his best training camp in years this summer and is looking like he’ll continue to be a force in the Chargers passing game despite fantasy owners casting him off. Gates is going two rounds later than teammate LaDarius Green which is a sin amongst man. Green is after all Gates backup and a far less experience player. I understand that none of us are excited about Gates upside at 34 years of age but he is not over the hill yet and still in better shape than he has been in years.