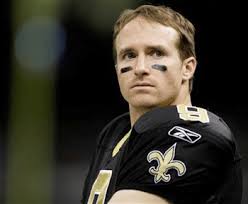 Let’s see what is going on in and around NFL Training Camp on this Monday August 11th:

I bet if I polled 100 of you randomly right now to grade Saints QB Drew Brees training camp on a scale of 1-10 so far he would come out with a 9.5. What he should grade out at is INCOMPLETE. Brees has missed over a week due to an oblique injury that evidently is a quite serious deal right now. Brees has been unable to throw the ball at all since the start of camp and its becoming quite concerning to the coaching staff.

Nobody is really worried about Drew Brees not getting practice reps in here that is not the point. But for all of the praise rookie WR Brandin Cooks is getting with the plays he is making them off of the arm of Luke McCown and Ryan Griffin. The Saints offense is a timing based system and that has literally everything to do with the QB and WR being on the same exact page.

The Saints have a bunch of new players in new slots this summer and really could use their star QB running the offense. If Brees is going to miss another week or more of camp it has to start to impact the fantasy value of the WR’s and RB’s in the Saints offense. If you are one of those “take a QB early” guys then please make sure you do your research and select one that is not injured.

How many times have I told you this summer to stay away from Marshawn Lynch? At this point I almost hope that you draft him early just so that when he is either injured, suspended or institutionalized I can scream from the rooftops “I TOLD YOU SO!!”

Lynch in being investigated AGAIN for an incident described as “assault and property damage” in Bellvue, Washington in the early hours of Sunday morning. A woman is alleging that Lynch got all crazy in her apartment after a long night out over the weekend. Good lord.

Unless you get Lynch at a crazy value (talking fourth round or later) there is no reason to draft him this year. A few weeks ago I thought that it might be OK to draft him in the second and then make sure you grab his handcuff a few rounds later just to lock up the Seahawks RB situation. But now we don’t even know who the handcuff to Lynch is going to be. Robert Turbin seems to have pulled ahead of Christine Michael and thus it is a big ol’ flaming bag of shit that you should not use your new boots to stomp out.

Cincinnati Bengals WR Marvin Jones is out for “awhile” after undergoing surgery today to have metal screws inserted into what has been diagnosed as a broken foot suffered Saturday night. The initial prognosis is about 6-8 weeks which makes Jones a candidate for the IR/designated to return tag that each team gets to use only once per season.

As much as I love Marvin Jones, this isn’t that big of a loss for the Bengals as it is for fantasy owners who had already drafted him. Mohammad Sanu has been enjoying a great camp and was the WR2 in Cincinnati the past two seasons. He knows all of the routes and fits in perfect. Dane Sanzenbacher will step into the slot role which is where he fits best anyways. Hue Jackson’s offense calls for quick hitting passes delivered on the fly. Jones was more of a big play and red zone guy ultimately so this shouldn’t slow down the Bengals offense much at all.

Who Wants Some Really WEIRD Stories?

I usually try and pack these Training Camp Reports full of useful fantasy football information. But sometimes the stories I hear from around training camp and the NFL are just plain weird. Case in point:

The Ravens players actually held a lockerroom over/under bet this weekend to see just how many fights that WR Steve Smith would get into with the San Francisco 49ers this weekend. I have been saying for years that Smith is washed up and that his only move is to instigate contact and draw penalties these days. It turns out that his own team agrees with me. How pathetic.

When I say the name Michael Campanaro you probably have no idea who I am talking about unless you are either a huge Ravens or Wake Forest fan. Campanaro is a WR drafted in the seventh round by the Baltimore Ravens and who has had an up and down camp thus far. Today his parents came to visit him at training camp and evidently thought parking wasn’t an issue in Owings Mills today. Turns out they parked in Ravens owner Steve Bisciotti’s parking space right up front and eventually had to be asked to move or be towed when Biscotti arrived. I guess Bisciotti takes his parking spot VERY seriously something you would have never known based on the oversized “SB” written directly on the parking space itself.

Browns head coach Mike Pettine isn’t scared of a little rain nor he is going to allow his players to grow up to be pussies. So despite raging showers this afternoon, Pettine kept his team outside to practice in the elements today and hereby won favor with me for the rest of his tenure in Cleveland.

I remember practicing in the 100 degree humid heat of summer here in Chicago and many, many, MANY times on the field then eventually the parking lot when the field got too soaked. I always find it sad that pro teams back down due to the elements and it seems to get worse with every passing season. I am glad that the Browns decided to be men today.

This Bill O’Brien-Andrew Brown story seems to get more and more legs with each passing hour. The latest is that Brown showed a “lack of concern” after putting the ball on the ground in practice during the week to which O’Brien took great exception. O’Brien berated him in front of the team and then had him dress but not play on Saturday’s game against the Cardinals.

Now O’Brien is all over the media telling people how bad the Texans RB situation is and then had veterans Ronnie Brown, William Powell and Brian Leonard work out for the team this morning. Andre Brown is done in Houston and Bill O’Brien has thrown his first official fit of 2014. Too bad he can’t do a little something more with a team that was thrashed 32-0 in a preseason game in which nobody (even the Cardinals defense) gave two shits.

The Eagles lost backup C Julian Vandervelde to back surgery today. He will likely miss at least a moth of the regular season and could be placed on season ending IR. The team also will be out the services of RT Lane Johnson who has to serve a four game suspension to start the season.

The Bears officially reinstated TE Martellus Bennett on Sunday. I just figure that I should let you know even though every other news agency jumped on this while we were breaking down game tape this weekend.

Chiefs PK Ryan Succop is nursing a groin injury that has kept him out of practice the past few days. Rookie Cairo Santos was competing with Succop for the placekicking job this summer and has honestly been kicking his butt.