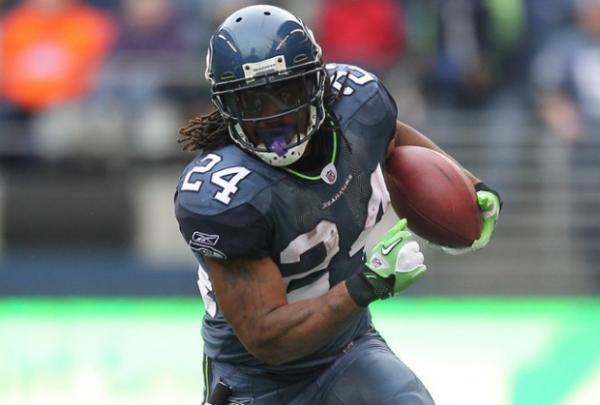 Here is the Training Camp Report for Tuesday July 31st:

It seems as though everybody but Marshawn Lynch knew he had little to no chance of getting a contract extension out of the Seahawks this season. So, with his tail tucked between his legs Lynch showed up at Seahawks camp this afternoon, officially ending his week long holdout.

The good news for Lynch however is that the Seahawks did give up a slight bump in pay for this year. He got an extra $1 million for 2014, which is just about enough to cover his fines for holding out which total close to $500,000. He also got a half-million extra in incentive clauses for the 2015 season which we all know he will never see.

The bottom line here is that Lynch’s days with the Seahawks are numbered. Everybody with eyeballs and a pulse realize that Lynch is on a dramatic downward slope mentally exhibiting erratic behavior over and over again. Between getting in nightclub fights, parking his Lamborghini on the street with velvet ropes and blowing off the Seahawks team White House visit, he simply isn’t playing with a full deck.

The Seahawks have insured themselves quite well behind Lynch in having both Robert Turbin and second year RB Christine Michael ready to go if and when Lynch gets hurt, suspended or decides to hold out. Head coach Pete Carroll was very upset with Lynch’s sudden holdout last week and actually referenced the Seahawks taking a big chance on Lynch back when he was floundering with the Bills. I have absolutely no confidence in Lynch this season. The holdout cost him practice time and a guy who eats Skittles for meals shouldn’t be trusted to remain healthy for long. You absolutely must handcuff Lynch with Christine Michael this year if you wind up drafting him this season.

At Texas A&M Jace Amaro was one of the kings of the campus. He was one of Johnny Manziel’s main weapons and a first team All-American. But here in Jets camp he is just another rookie fighting for position amongst many talented TE’s. It hasn’t been a good beginning for Amaro.

The second round pick has been dropping just about everything throw his was thus far and also is way behind in picking up the playbook and knowing his assignments. It got so bad this morning for Amaro that when he dropped yet another pass some of his teammates started to turn on him. Shouts of “Can’t catch a cold!” were heard after one of his drops and offensive coordinator Marty Morninwhig also gave Amaro some harsh words after he slipped on another play. At this point, the second round pick will be fortunate to make the 53 man roster let alone see much playing time early on this season.

For the past two seasons the New Orleans Saints, the fantasy and me owners everywhere have been waiting for Nick Toon to claim his spot in the Saints WR rotation. But after missing all of 2012 with a foot injury and barely getting on the field in 2013, hope for Toon is fading fast. But this summer it appears as though a light bulb has gone off in his head as Toon has frequently been among the best performers in Saints camp. Head coach Sean Payton went as far as to give Toon a non-provoked shout out to the media after practice this afternoon saying that he was having a “Terrific camp.”

With Marques Colston’s constant lower leg issues and Kenny Stills missing camp with a hamstring injury, it’s been Nick Toon and Brandin Cooks getting most of the first team work this summer. Today Toon split Champ Bailey and Kenny Vaccaro for a 54 yard TD catch from Drew Brees while Cooks made a diving catch over the middle on a terrible pass by backup QB Logan Kilgore. Everybody is in love with Cooks this season but Toon could prove to be a very nice late round selection in drafts this season.

Another name that I am sure you haven’t heard of probably is Pittsburgh Steelers RB Miguel Maysonet. Maysonet’s claim to fame after being an undrafted free agent last year was signing with seven different NFL teams in one season. Maysonet spent parts of last year with the Eagles, Browns, Colts, Chargers, Jets, Redskins and the Steelers. Well Maysonet ran with the first team offense today and looked quite good doing so. Many in the media noticed how much explosive and just plain faster he was compared to Le’Veon Bell and LeGarrette Blount who were both out with injuries today. Keep an eye on this kid as he could wind up being far more valuable than Dri Archer this season.

One of my favorite rookie WR’s went down with a hamstring injury today. Jaguars WR Allen Robinson had been running with the first team offense while Cecil Shorts was also out with a hamstring ailment. There was no update about Robinson after practice but he is likely to miss at least a few days. Marqise Lee is reaping the rewards here and has been making some real nice plays early on for the Jags.

Another of my favorite sleeper WR’s also sat out today with a hamstring. Dolphins WR Mike Wallace is nursing a minor hamstring strain right now though the Dolphins say they are just exercising caution. It has not been a good camp for the Dolphins offense. It has taken awhile for the new starters along the offensive line to gel and other than RB Lamar Miller everybody has looked just out of sync.