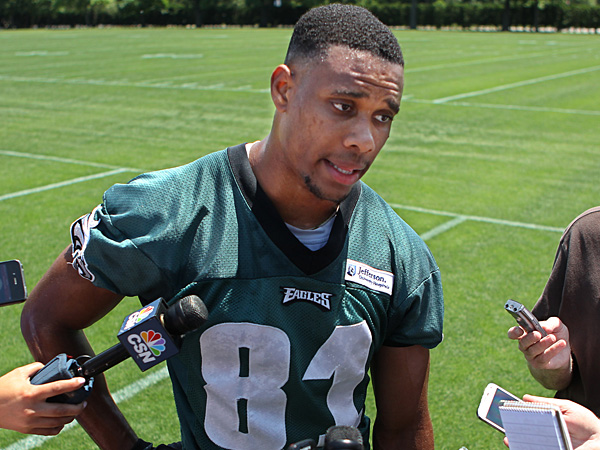 Anytime you hear that an athlete shares bloodlines with Jerry Rice you must take notice. When that athlete is a two time first team All-SEC wide receiver, you have no choice but to drop everything you are doing to watch this person play. Well, that is exactly what Jordan Matthews is. His Mother is Jerry Rice’s first cousin and thus we understand that he comes from great stock. At 6’3” and 212 pounds, Matthews is even bigger than Pro-Football Hall Of Famer.

Matthews was extremely productive at Vanderbilt despite having an unproven QB in his final season in 2013. Matthews is the kind of kid that is just good at everything that he does. He’s a former standout basketball player and defensive back in high school. He also tore up the scouting combine by running a 4.46 40-yard dash, 35.5 inch vertical leap and 21 reps of 225 lbs on the bench press which was the most by any WR in this years draft class.

Matthews really has it all going for him. He is big, fast, smart, a great route runner, competes well for the football and has a very good work ethic. At times he grew frustrated with the offense at Vanderbilt but should fit in quite nicely with Chip Kelly’s up tempo offense in Philadelphia.

The only negatives about Jordan Matthews are a lack of speed in running his routes and a tendency for body catching sometimes. He has great straight ahead speed but doesn’t come in and out of his breaks very well. It could be difficult for a rookie like Matthews to come in and start in Philadelphia right away because of the style of offense they run. Though Matthews has a very professional attitude and work ethic and will likely put in the work necessary to be prepared for everything the Eagles coaches throw at him.

The Philadelphia Eagles offense is widely regarded as one of the best in the NFL. They play a very aggressive style in which they attack the defense by not breaking to huddle and thus not allowing them substitutions. I am sure that defensive coordinators will have a response for this style of offense in 2014 though Chip Kelly could very well add new wrinkles as well to stay ahead.

With the loss of DeSean Jackson and Jason Avant the Eagles have a big need at WR this year. Jeremy Maclin is back but is coming off a torn ACL a year ago and Riley Cooper had a three game run last year but is incredibly inconsistent. Other than Maclin there just isn’t much talent at the WR position in Philadelphia.

Matthews has the size of Riley Cooper along with the route running and speed of Jeremy Maclin. He is coming in to a great situation with the Eagles but one that will require him to learn the entire playbook very quickly. Of all the WR’s drafted in this years draft only Sammy Watkins has more upside than Jordan Matthews.

His longterm upside is as good as any player drafted this year as well. I have him as my fifth ranked dynasty league player this year for that reason. I have little doubt that Matthews will be an All-Pro WR one day. Whether that happens in 2014 I do not know. I am going to try and take Matthews as a later middle round prospect. He could be an 80 catch, 8+ TD type of guy if he can learn the full playbook and create chemistry with QB Nick Foles.

I really like Jordan Matthews this year. If you were designing a prototype WR he would be it. Having a strong family background along with a cousin like Jerry Rice you would think that he’d be well prepared for the next level. He is a guy that I will draft in almost every format. Although I would select him as my WR4 I have a feeling that he could wind up producing close to a WR2 type in 2014.