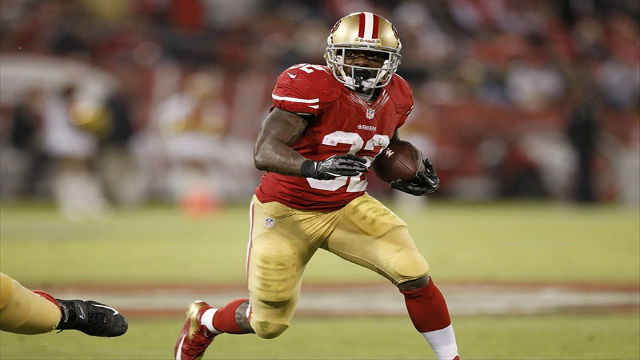 Welcome to the 2014 NFL Training Camp Report!! Loyal readers of Fantasy Alarm know that every summer I like to keep a finger on the pulse of NFL training camps. I am so excited this year as for the first time I will have a lot of help. The Fantasy Alarm news department who are always on top of every breaking and developing story will be aiding the cause of keeping our readers informed.

Backup RB Kendall Hunter suffered a torn ACL in his right knee during Friday’s practice and will miss the entire 2014 season. Hunter is a solid backup RB but was never a legitimate threat to be a fantasy football producer. This news is obviously great for those of us who realized Hunter’s limitations and have been gobbling up rookie Carlos Hyde as Frank Gore’s handcuff or as a late round flier.

For the past two months I have been preaching that the 49ers running game will be highly productive once again in 2014. Yet, nobody wants to draft Frank Gore whatsoever. His current ADP sits in the sixth round which is ridiculous considering guys like Toby Gerhart, Alfred Morris, Joique Bell and Shane Vereen are going well before him. The fact is that the 49ers can run the football as well as any team in the league. We have them ranked as the #1 offensive line in the NFL in our 2014 Fantasy Football Draft Guide. The past two seasons the 49ers have finished third and fourth in the league in rushing yards respectively. They’ve also finished fourth and sixth in rushing touchdowns the past two seasons. While I am at it they also finished third and seventh in rushing attempts over the past two seasons as well.   You see, the volume and production is going to be there. Nobody likes Frank Gore at this stage of his career. And we all know that he will probably break down at some point this season which is why if you take him you must grab Carlos Hyde not too long after. Not paying attention to the 49ers backfield will be a major regret of many next January.

The Worst Player Of The Day

A year ago the Giants were the only team to jump on the Ryan Nassib bandwagon (albeit not until the fourth round). Entering his second training camp though you would expect some development but if you watched him out there today you would have laughed your ass off. Nassib made Tim Tebow look like Joe Montana with his performance today. One of the funniest moments was when Nassib tried to complete a simple post and go route to Jerrel Jernigan. Watch the video and tell me you are not frightened of an Eli Manning injury.

A Ton Of Injuries

Let’s rundown the many injuries that went down on this Saturday:

Saints WR Kenny Stills is still nursing the quad injury that limited him back in OTA’s a few weeks ago. The more practices that Stills misses the further he gets behind guys like Brandin Cooks, Robert Meachem and even Nick Toon.

Bills TE Tony Moeaki has spent a lot of time in the trainers room since being drafted in the third round of the 2010 NFL Draft. He missed the entire 2013 season after fracturing his shoulder in the preseason with the Kansas City Chiefs. Moeaki is now in camp with the Buffalo Bills competing for the backup job behind Scott Chandler. Well shockingly Moeaki is also sitting out with hamstring tightness these days and once again falling behind in keeping his career above water.

The Vikings announced that second year WR Cordarrelle Patterson will miss the first couple of practices due to a foot injury. They provided no further update on the actual nature of the injury but it’s obviously concerning being as Patterson is the love child of so many fantasy football players this season.

The strangest injury of the day has to be San Diego Chargers rookie offensive guard Chris Watt who was carted off the practice field today with a mystery illness. The belief is that Watt was suffering from dehydration as his symptoms consisted of dizziness and chest pains. The Chargers will offer an update on Watt’s condition tomorrow.