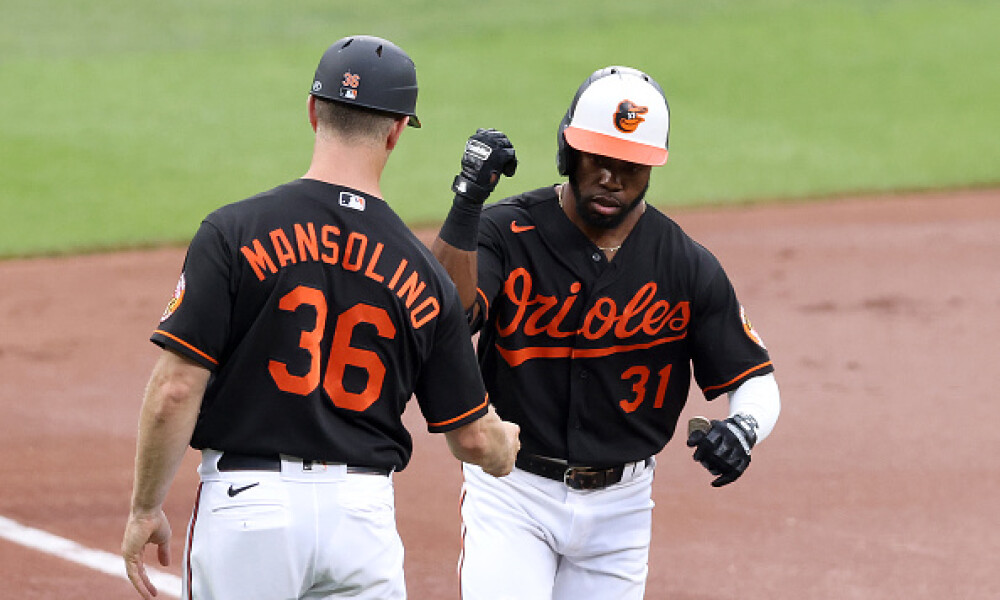 The Wacky and Weird

Man it must feel good to get out to a 5-0 lead, then 11-1, am I right? Well no lead is too big for the cellar dweller Pittsburgh Pirates as they won a game they were at one point leading 10-1, 11-10. Cleveland put up six runs in the seventh and three more in the eighth! Baseball games are NEVER out of reach. That’s why there is a Twitter account literally named @cantpredictball.

Mull This Over for a Second

After a two-homer, three-hit evening for Cedric Mullins, I couldn’t stop thinking if he could actually finish as a top-10 outfielder in all of Fantasy Baseball by the end of the year? Could he even flirt with the top-five? Hear me out. There are only SIX players in baseball right now with double-digit home runs and stolen bases and Mullins is one of them. Four of the six are outfielders and only ONE is hitting north of .300...you guessed it, Cedric Mullins. Some food for thought while you’re sipping your coffee this morning.

That’s his new nickname. At least it will be if he continues to pitch this well. In three starts this month, Joey Lucchesi has yet to allow more than one earned run in a start and was even stretched out to 90 pitches in Friday’s outing against the Nationals, an offense that ranks in the top-10 in OPS, wOBA and wRC+ against lefties. As a starter this year, Lucchesi has a 26.7% K-rate and is allowing just 25% hard-contact on the year. Time to seriously start looking at Lucchesi as a viable candidate for your fantasy teams for the remainder of the year.

That’s how Adam Sandler said it in Happy Gilmore, right? Oh, I added an ia? Well it was intentional because Raimel Tapia extended his hitting streak to 15 games on Friday. Not only is his hitting streak up to 15 games, but he’s hitting .400 in June and has notched an OPS around 1.000 over that span as well.

I mean, I know Shohei Ohtani and Vlad Guerrero Jr. are having incredible seasons, but how about some love for Matt Olson and his AL West leading Athletics when we start talking about MVP! Olson homered for the sixth time in June on Friday and has hit .400+ with a near 1.300 OPS for the month. Maybe the best part of all is that he is match-up proof. Throw a righty against him, that’ll do the trick! Nah, his .974 OPS against RHP says otherwise. Well, he must struggle in the lefty-lefty match-up! If you consider a .633 SLG%, .344 ISO and .414 wOBA off of southpaws struggling then yeah, he’s horrible!

Max Fried twirled seven one-run innings while striking out six on Friday against the Cardinals, a team that hits left-handed pitching well. The wind was taken out of their sails early when Carlos Martinez allowed five runs through two innings. This has become a trend for Martinez as he’s allowed five earned runs or more in three-of-four June starts. Fried has lowered his ERA from 5.12 to 4.21 just over his last three starts, notching a quality outing in each contest.

Well...I’m breaking my own rule and telling you Luis Garcia is an All-star. Another fantastic performance, against one of the best teams in baseball, Garcia went seven innings of one-run baseball while striking out eight White Sox. He has north of a 28% K-rate, he hasn’t allowed more than three earned runs in ANY outing this year and here’s a list of teams he’s beat this year so far;

Looking over some Las Vegas totals and spreads for Saturday’s day of baseball, the Dodgers and Walker Buehler check in as the biggest favorites of the day at -210. Losers of now 15 straight, Arizona stands little chance against the budding star in Buehler, despite the fact that their own home ballpark is a top-five offensive paradise in the league.

A line I find a little confusing is Atlanta and St. Louis being so close to even money in a lot of different places I look. Some places have it as close as ATL -125/STL +115. Why? I know Drew Smyly isn’t great, but the Cardinals’ have been closing their eyes when they swing as they rank 28th in OPS over the past two weeks. To double-down on the Braves a bit more here -- which I hope you’ve figured out by now -- Adam Wainwright CANNOT pitch away from Busch Stadium. It’s a story as old as time. He has an 8.20 ERA on the road this year, it was 6.22 in 2019, 4.38 in ‘18, 7.32 in ‘17 and on and on and on. You know how this story goes!

You know what game could rival Coors Field for runs scored on Saturday? Boston and Kansas City. The over/under, which opened at 9.5, currently sits at 10.5. Martin Perez and Brad Keller toe the rubber for their respective teams and EACH PITCHER has allowed 11 ER over their previous two starts. That means that they’ve allowed a combined 22 ER over that span. Maybe we should be blaming their managers for leaving them in too long? Regardless who gets the blame here, buckle up for another run scoring affair!