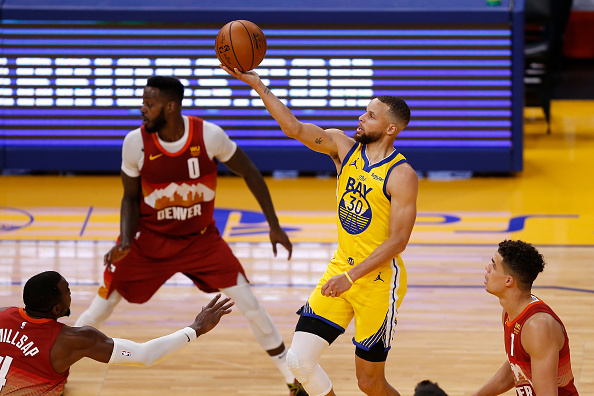 After a down game against the Wizards -- in the best spot -- Curry responded with an MVP-like performance scoring 32 points while going 11-of-18 from the floor, notching eight rebounds and three assists to boot. Curry has scored 30+ actual in 12 of his previous 13 games and has been the best player on the planet lately. He’s in one of the best match-up’s on the board, one that he already put up 55 DKP in.

With De’Aaron Fox out, Haliburton has been named the starter and essentially handed the keys to the lambo. We know how big of a role Fox plays -- the team’s leading scorer and assist man -- and the rookie is going to step in and be asked to pick up as much of that as he can. With that said, if SAC is going to keep this game competitive without Fox, Haliburton is going to have to do a little of everything, which he’s good at doing.

I mean, talk about upside without scoring. Against Denver, Green put up 44 DKP scoring just two points. That’s because he had 19 assists and 12 rebounds. Yeah, that’s the 2021 version of Draymond Green in a nutshell. Green has averaged 10.2 assists and 33.8 DKP/game over his last five contests.

No Fox, no Bagley and a limited Holmes. Haliburton partially taken out of the rotation of late so who knows how productive he’ll actually be. Without Fox and Bagley in the lineup, Barnes has a 20.3% USG rate and averages .93 FP/min. Not as big of numbers you would hope for, but very respectable and enough to make us interested in using him on this slate.

This is where I expect most of the scoring Fox leaves behind will come from. Hield has been a 20 PPG scorer in the past, so don’t put it past him to accomplish while Fox is out. He put up 29 actual last time out and has topped 24 twice in four games. He’s averaged 30.8 DKP/game over his last four, but that was all with Fox. Expect a Buddy blow up.

We keep mentioning it, but Oubre coming off the bench has been a PROBLEM for opposing defenses. Outside a lousy game in Philly, Oubre has thrived of late pouring in 23+ actual points and 37+ DKP in three-of-four games. He’s contributing across the board and it feels like he really found his niche coming off the bench. He has averaged 30.6 DKP/game in two meetings with the Kings this year.

We saw what sort of role Tyrese Haliburton has had pretty much all year -- until recently -- and I could see Wright picking that sort of role up while Fox is out. Before the last game against MIN, Wright had topped 26 minutes in three straight while putting up at least 28 DKP. With De’Aaron Fox off the floor, Wright has averaged .9 FP/min.

JTA has had a role with the GSW team all season and has averaged 27.1 MPG and 27.8 DKP/game over his last three contests. He’s going to play SF all the way to C based on the Warriors needs due to injuries and he can play all of those positions well. In this uptempo spot, it shouldn’t surprise you to see JTA went for 33.5 DKP in 26 minutes earlier in the season.

It’s not exciting, trust me, but at $3,600, you can’t do much better. Looney will continue to start and play anywhere from 26 to 35 minutes. He’ll continue to grab eight or more rebounds, two-plus assists and chip in with a couple of baskets, generally putting up 18-to-25 DKP. We don’t really need anything else from a guy we’re getting for free.

Oubre has been so good off the bench, the Warriors don’t want to disrupt his groove, thus Mulder slides into the starting rotation for a second straight game. Mulder shot the ball well on Friday hitting six-of-10 shot attempts, finishing with 14 actual points in 23 minutes. If we can get 23 minutes again, I mean, he’s $2,200. That’s a steal for someone starting against the WORST defensive rated team in basketball.