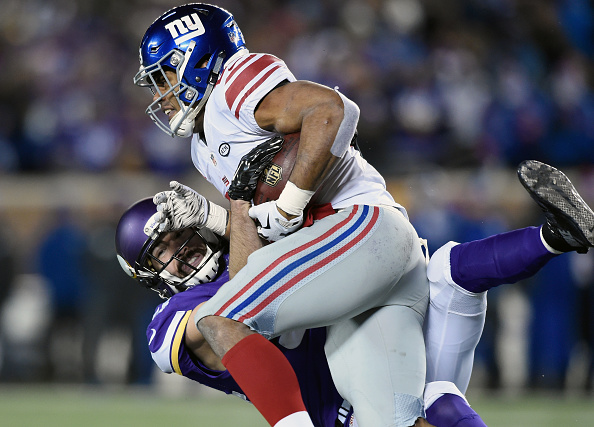 It’s Week 17 and for most the fantasy season has ended but for others the season’s end is still one more Sunday away.  With that in mind let’s take a look at the top players to add in Week 17 of the fantasy football season.

Ryan Fitzpatrick, NYJ – It’s only fitting that the final FAAB Report of the season will include Fitzpatrick, who despite being a top 10 fantasy quarterback this season, is owned in just 50 percent of fantasy leagues.  In Week 16 Fitzpatrick tossed another three touchdowns to bring his season totals up to 3,724 yards with 29 touchdowns and 12 interceptions.  In Week 17 the Jets will face the Buffalo Bills with their playoff lives on the line.  In their first meeting this season Fitzpatrick threw for 193 yards with two touchdowns and two interceptions but Buffalo’s secondary is dealing with some key injuries which should lead to a big game from Fitzmagic.

Sam Bradford, PHI – Bradford has been throwing the ball a ton lately, averaging 370 yards through the air over the last two games.  Fortunately for fantasy owners his recent gunslinger tendencies get to face off against a Giants defense that has allowed the second most fantasy points to opposing quarterbacks this season.  With both teams no longer playing for a spot in the playoffs this game could get sloppy on defense with neither team looking putting up much resistance.

Brian Hoyer, HOU – Hoyer is expected to start in Week 17 against the Jaguars in a game that will have playoff implications for Houston should the win and the Colts lose.  It’s been a tough season for Hoyer as multiple concussions has forced him to miss some time however when he has been on the field the numbers have been solid.  The Texans get to face the Jaguars in Week 17 who have allowed the fourth most fantasy points to opposing quarterbacks this season.

Rashad Jennings, NYG – The Giants running back situation has been a mess this season but over the last three weeks they have gone back to Jennings as the lead back and he has produced, averaging 17 carries for 87.3 yards a game.  In Week 17 the Giants will face off against the Eagles who have allowed the sixth most fantasy points to opposing running backs this season.

Karlos Williams BUF – Williams lead the Bills rushing attack in Week 16 as he carried the ball 16 times for 76 yards and a touchdown. Williams shared some carries with Mike Gillislee who had another big game thanks to some long runs but Williams out touched him significantly.  A tough matchup against the Jets awaits Williams however he should see enough of a work load to matter.

Cameron Artis-Payne, CAR – It was thought that CAP was going to be the leading back for the Panthers in Week 16 but that role went to Fozzy Whittaker with Payne seeing just five carries for 49 yards and one catch for seven yards.  Things are more favorable for CAP in Week 17 as Whittaker injured his ankle against the Falcons and is considered doubtful for the final week of the season.  If you pick up Payne you should monitor the status of Jonathan Stewart who is still listed as questionable but is hoping to be back for Week 17.

Marvin Jones, CIN – The Bengals are playing for a first-round bye in Week 17 and have the fortunate schedule of getting to play the Ravens to finish off their regular season.  The Ravens did just shut down the Steelers' high powered passing attack in Week 16 but playing the odds would suggest that the Bengals should throw all of the Ravens which bodes well for Jones who caught five passes for 94 yards and a touchdown in their first meeting this season.

Nate Washington, HOU – Washington will head into Week 17 as the Texans' No. 2 receiver with Cecil Shorts already being deemed out with a groin injury.  The pending return of Brian Hoyer will give a big boost to the Texans' passing attack and a player like Washington in particular who should draw single coverage as the Jaguars focus on shutting down DeAndre Hopkins.

Roddy White, ATL – White has looked like he is on his last legs this season for the Falcons as the one time great has caught just 42 passes for 496 yards and one touchdown.  The reason for optimism here comes with the matchup as the Matt Ryan will get to throw against the league’s worst pass defense in the New Orleans Saints.   Most of the targets should be heading Julio Jones’ way however White did just catch five passes on six targets for 67 yards against the Panthers so maybe the 12th year pro has one big game left in him.

Jacob Tamme, ATL – Tamme and the Falcons' passing attack gets to face off against the Saints in Week 17 which is really good news for any passing attack in the NFL this season.   The Saints are allowing the most fantasy points to opposing tight ends this season which could lead to a big game.

Zach Miller, CHI – Miller continues to produce as the Bears starting tight end and with Alshon Jeffery dealing with an injury he has turned into Jay Cutler’s primary passing target.  Over the last three weeks Miller is averaging six catches for 70 yards and he will get to face off against a Lions defense in Week 17 that has allowed the fourth most fantasy points to opposing tight ends this season.

Zach Ertz, PHI – Ertz has been crushing it of late, averaging 8.7 catches for 99.3 yards over the last three games. Fortunately for Ertz he draws yet another favorable matchup in Week 17 against a Giants defense that has allowed the second most fantasy points to opposing tight ends this season.  Ertz caught four passes for 43 yards in their first meeting but with Sam Bradford slinging the ball around the field like he has of late this matchup could result in one final big game from Ertz this season.