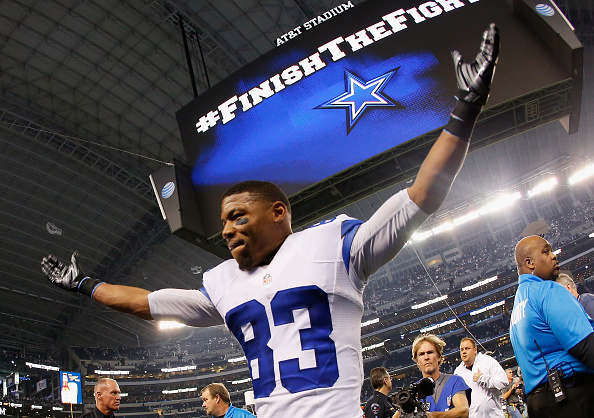 Week 1 is in the books and with it comes the first major waiver period of the fantasy football season.  There were some breakout players in Week 1 that should end up being heavily claimed but there were also some injuries to major talents such as Dez Bryant, T.Y. Hilton and Andre Ellington that could have their owners scrambling for a replacement in time for Week 2.  In this addition of Waiver Flavor we take a look at some of those breakout players as well as some players that can help replace those who were injured.

Marcus Mariota, TEN- What a debut for the rookie as he torched a poor Tampa defense for 209 yards and four touchdowns while completing 81.3% of his passes.  Mariota went undrafted in the majority of standard leagues but he figures to be a popular waiver claim in Week 2 as a bench stash.  His Week 2 opponent will be the Cleveland Browns who just allowed a multiple touchdown effort from Ryan Fitzpatrick in Week 1.

Alex Smith, KC- Smith opened the 2015 season with a bang as he burned a Texans defense that was expected to rank among the league’s best for 243 yards and three touchdowns.  Smith connected with his favorite target Travis Kelce for two of the touchdowns and running back Jamaal Charles for his third.  Offseason free-agent signing Jeremy Maclin caught five passes for 52 yards and figures to be the best receiver Smith has had while playing in KC.  A Thursday matchup with the Broncos await Smith and the Chiefs in Week 2.

Chris Johnson, ARZ- Johnson was the Cardinals feature back after Andre Ellington left the game with a knee injury.  Reports are that Ellington has a minor PCL sprain that will definitely force him to miss Week 2 and has his Week 3 status in jeopardy.  Johnson saw 10 carries on Sunday but rushed for just 37 yards as the Cardinals opted to attack the Saints poor pass defense.  A Week 2 matchup against the Bears awaits Johnson and the Cardinals in what should be another game where the Arizona passing attack puts up big numbers with their running game playing a complimentary role.

Karlos Williams, BUF- Williams showed great burst in his NFL debut against the Colts as he gained 55 yards and a touchdown on six carries.  While the six carries are certainly nothing special, he was LeSean McCoy's primary backup and with the Bills running style could figure to see a handful of carries each contest.  At the very least McCoy owners should take a stab at Williams as he is his handcuff and could figure to be an effective back if McCoy goes down with an injury.  A Week 2 matchup against a Patriots defense that was just shredded on the ground by Pittsburg awaits and a repeat performance from Williams would not be a shock.

Dion Lewis, NE- Lewis made this list last week heading into the Patriots Week 1 matchup against the Steelers as he figured to play a key role, particularly in the passing game, with LeGarrette Blount suspended for the contest.  Lewis proved in Week 1 however that while his receiving skills are certainly worth noting (four catches for 51 yards) he is also a very capable runner, gaining 69 yards on 15 carries thanks to his incredible quickness when hitting the hole.  The Patriots face a very tough Bills front seven in Week 2 and will likely feature Lewis again in the backfield as a receiving option for Tom Brady which makes him an ideal flex option in PPR leagues.

Donte Moncrief, IND- T.Y. Hilton suffered a bruised knee on Sunday which is expected to keep him out for 1-to-2 Weeks but head coach Chuck Pagano has stated that there is no set timetable for Hilton’s return.  With this news Donte Moncrief sees a major jump in his fantasy value.  Sunday against the Bills Moncrief caught six passes on 11 targets for 46 yards and a touchdown.  His production bested that of Andre Johnson who saw 10 targets but was only able to make four catches for 24 yards.  The Colts find themselves facing another tough defense in Week 2 as they match up against the Jets and Revis Island but Moncrief should figure to see plenty of targets once again.

James Jones, GB- Jones was my No.1 waiver add for Week 1 and he did not disappoint as he caught four passes for 52 yards and two touchdowns.  Jones is third on the depth chart for the Packers behind Randall Cobb and Davante Adams but his propensity for catching touchdown passes in the Packers offense should not be ignored.  In 2012 Jones caught 14 touchdown passes while putting his No.3 receiver numbers with the Packers and Aaron Rodgers.  Davante Adams lead the Packers with eight targets with Cobb seeing five and Jones getting four so there is still ways to go before Jones becomes a certified fantasy starter but in leagues where you can start three wide receivers he should definitely be owned.

Terrance Williams/Cole Beasley, DAL- Sunday night could not have gone any worse for Dez Bryant owners as the Cowboys stud WR suffered a broken foot that could keep him out for 6-to-8 weeks.  With Bryant out the Cowboys will turn to Terrence Williams and Cole Beasley to carry the workload at wide receiver.  Williams finished Sunday’s game with five catches on eight targets for 60 yards while Beasley finished the game with four catches on six targets for 49 yards.  The Cowboys may lean a little bit more on the running attack with Bryant out but both Williams and Beasley should see their values jump in both standard and PPR leagues.

Tyler Eifert, CIN- Eifert was as popular sleeper candidate coming into the 2015 season as he had no real competition for targets at the tight end positon.  His Week 1 performance however was more than anybody could have expected as he lead the Bengals in all receiving categories with nine catches on 12 targets for 104 yards and two touchdowns.  With his size and speed Eifert figures to be a matchup nightmare for opposing defenses and should finally give Andy Dalton a legitimate No.2 threat next to A.J. Green in the offense.  In Week 2 the Bengals face off against the Chargers who allowed tight end Eric Ebron to lead the Lions receivers with four catches for 53 yards and a touchdown in Week 1.

Austin Seferian-Jenkins, TB- Seferian-Jenkins was a popular sleeper candidate in 2014 but he was never able to get things going during his rookie season after being limited to just nine games.  With Mike Evans out of the lineup in Week 1 Seferian-Jenkins turned in a spectacular performance as he and Jameis Winston connected on five of seven targets for a team high 110 yards and two touchdowns.  The return of Mike Evans will likely cost Seferian-Jenkins some targets but this Week 1 performance should garner him some waiver love given the lack of depth at the tight end position.