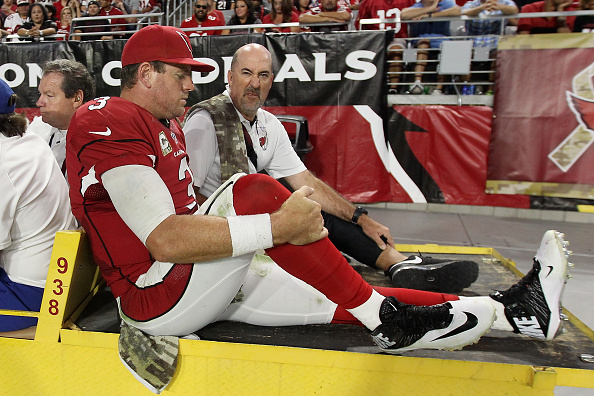 The end of Week 10 brings about another injury that has seriously impacted the fantasy world as we learn that Carson Palmer is done for the season with a torn ACL.  In last week’s Stock Watch, we discussed the Nick Foles injury and tried to identify a few replacements for him.  This week we will dig a little deeper to identify a few players Palmer owners should try and grab, as well as a few players that are worth moving in the wake of his injury.

Kyle Orton, QB Buf- I myself have been a very unfortunate soul, having lost both Foles and Palmer in back to back weeks of a two-QB league.  Following the Foles injury I went ahead and made a minor move to acquire Orton.  Since taking over for the struggling E.J. Manuel he has completed 65.6-percent of his passes with 10 touchdowns, three interceptions and a QB rating of 98.4, which ranks among the top 10 in the NFL.   Orton is also averaging 17 fantasy points per week in standard leagues this season which is slightly higher than Palmer’s 16.8 in games they started.  Orton has the benefit of throwing to super-stud, and likely offensive rookie of the year, Sammy Watkins and has seen his secondary options in Robert Woods and Chris Hogan become more reliable over the past few weeks.  I also feel that the return of Fred Jackson to the Bills lineup will be beneficial as he is the team’s second leading receiver with 37 receptions and is actually one of the best receiving backs in all of football.  The Bills face the Dolphins this week which poses a tough match-up, but from there, things get a bit easier down the stretch as they face the Broncos, Packers and Raiders in Weeks 14-through-16. That would typically be the time fantasy playoffs are going on in standard leagues which can make Orton an appealing option who is likely available for cheap.

Josh McCown, QB TB- This one might be a hard-sell given how poor the Buccaneers offense has been this season but I am going to give a go.  McCown returned as the Buccaneers starting QB in Week 10 against the Falcons and put up 19 fantasy points in standard leagues. He has two great matchups over the coming weeks starting with the Redskins who have allowed the third most fantasy points to opposing QBs this season and then the Bears in Week 12 who have allowed the most fantasy points to the position this year.  If you are in a league where the trade deadline has already passed McCown is likely available on the waiver wire and is worth adding given his matchups.  Further helping McCown’s cause is that the Buccaneers actually have some solid offensive weapons with Mike Evans and Vincent Jackson at wide receiver along with Bobby Rainey and now Charles Sims at running back.  The dreadful Tampa defense will likely force the Bucs to pass the ball more in order to stay competitive and McCown, at the very least, should put up plenty of garbage time points as opposing defenses sit in a soft prevent late in games.  For those who may wonder about his schedule come playoff time the Buccaneers face a Panthers team in Week 15 that just allowed “The Sanchize” to throw for 332 yards and two scores and the Packers in Week 16 who, prior the demolition of Jay Cutler and the Bears, had allowed seven passing touchdowns in their previous three games.

Cam Newton, QB CAR- It was just a few weeks ago that I had Newton in the “Buy” portion of this article and boy has he let me down. My optimism on Newton came from his legs not his arm as Cam started running more which would have needed him to only produce average passing numbers to be an above average starting QB each week.  Unfortunately, he has not been able to provide even average passing numbers as I watch him struggle with his accuracy and make poor decisions by often passing up on the short yardage gain for the deep ball which is easily defended and typically not accurately thrown. The Panthers are not helping Newton either as his offensive line has been horrendous and their running game is almost non-existent with DeAngelo Williams clearly still not 100-percent and Jonathan Stewart averaging 3.9 yards per carry.  If you are a Newton owner I would take a stab at trying to move him to a team that has lost either Foles or Palmer over the past two weeks and see what type of return can be had.

Larry Fitzgerald, WR ARI- Palmer’s injury couldn’t be worse news for Fitzgerald owners who over the past three weeks have seen him catch 21 passes for 342 yards and a score for an average of 13.3 fantasy point per game in standard leagues and 20.3 fantasy points in one-point PPR leagues.  The bad news comes with the arrival of Drew Stanton at QB as Fitzgerald averaged just 3.6 fantasy points with him at the helm this season.  Fitzgerald had 10 targets on Sunday but just one came with Stanton under center and it went for an incomplete pass.  The Cardinals also do not possess the easiest of schedules in the coming weeks as they face off against some of the best pass defenses in fantasy starting with the league’s No. 1 Lions in Week 11.  If you are unable to move Fitzgerald you should expect him to drop to more of a No.3 wide receiver instead of the No.2 with No.1 upside he has provided this season with a healthy Carson Palmer.