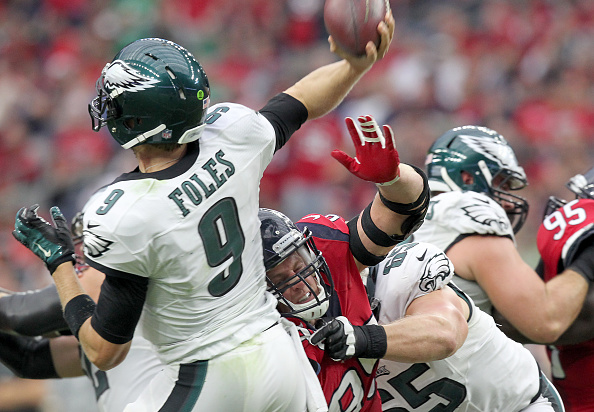 The big news in Week 9 was the injury to Eagles quarterback Nick Foles who will be out six-to-eight weeks with a broken collarbone. The injury has all but ended his season in standard fantasy formats.  For that, this week’s Stock Watch is themed around Foles and the impact his injury will have on the fantasy world.  The ‘Buy’ segment will focus on players who either benefit from his injury or could be a potential cheap replacement with major upside going forward while the ‘Sell’ portion will focus on two quarterbacks who could bring a solid return from an owner who is desperate to replace Foles with anyone not named Mark Sanchez.

LeSean McCoy, RB PHI- Well, Shady has finally started to turn things around and luckily for his owners it only took about five weeks to do so.  After totaling 273 yards over the first five games, McCoy has rushed for 349 yards over the past three.  With the injury to Nick Foles the Eagles may find themselves running the ball more than they normally would which should be to the benefit of McCoy, who finds himself up against the Panthers, Packers and Titans over the next three weeks, all of whom rank among the worst in terms of points allowed to opposing running backs this season.   Though the time to Buy-Low has likely come to an end for McCoy I would be willing to pay the price to acquire him if you find yourself looking for an upgrade at the running back position as you make your push towards the playoffs.

Matthew Stafford, QB DET- Stafford currently ranks 15th amongst fantasy quarterbacks this season, making it likely that, in most standard leagues, he is sitting on some owners bench.  His struggles can be directly linked to the absence of Calvin Johnson who was injured in Week 3 and used as a decoy until being shut down in Week 6.  Since Calvin’s initial injury, the Lions passing attack has become very one dimensional as Stafford has targeted Golden Tate, the man who was brought in to give him a legitimate second option, early and often but has failed to establish a rapport with his additional receiving options. Since Week 4 , he has completed just 36 passes to his other four receiving targets, not including his running backs.  With Calvin back in the lineup it will allow Tate to slide back into the No.2 receiver’s role which can only help Stafford’s passing numbers and push him towards being a top 10 starter for the remainder of the season.  Though the schedule for the Lions is not exactly quarterback-friendly over the next few weeks, it dramatically improves around the time most leagues’ fantasy playoffs begin, with two match-ups against a Bears defense that has allowed the third most fantasy points to quarterbacks this season and the Falcons who have allowed the fifth most points. If you were one of the unfortunate who just lost Nick Foles, Stafford is a more than respectable replacement who could end up being had for cheap given his probable inactivity on an owner’s roster.

Russell Wilson, QB SEA- Wilson is currently ranked sixth amongst quarterbacks in standard fantasy leagues. His ranking, however, is predicated based upon the success he had over the first four games of the season where he scored no fewer than 17 points per week.  Unfortunately, Wilson has struggled since then, having posted no more than 12 points in any other week, with the obvious exception of his season best 36 point output in Week 7.  The recent struggles can potentially be linked to the trading of Percy Harvin after Week 6 who was the Seahawks most dangerous playmaker. But even then Wilson was only able to muster 13.5 points against an awful Panthers defense and 10 points against the winless Raiders over the past two weeks.  Wilson finds himself with another favorable matchup in Week 10 against the Giants but then faces a string of tough defenses that rank amongst the best against fantasy quarterbacks this season.  With the recent injury to Nick Foles and trade deadlines looming you might be able to dangle Wilson as trade bait given the likely lack of better options available in free-agency.

Ben Roethlisberger, QB PIT- The reasoning is an obvious one as Roethlisberger has thrown 12 touchdown passes over the past two weeks after having thrown just 10 in his previous seven.  Though it is obviously very tempting to keep Big Ben it’s very unrealistic to assume he will continue to throw six touchdown passes every week.  The overall theme of this article has been largely predicated on targeting the owner who lost Nick Foles as their starting QB and are left with very little to replace him.  Given Ben’s historic past few weeks and the potential desperation of an owner in need of a quarterback you could very well find yourself with the type of trade package that wasn’t available just two short weeks ago.  Roethlisberger finds himself with an even better matchup in Week 10 than he has had in his previous two starts as the Steelers face the Jets. New York has allowed the most fantasy points to opposing quarterbacks this season which can also be used to enhance his value to a potential trade partner.