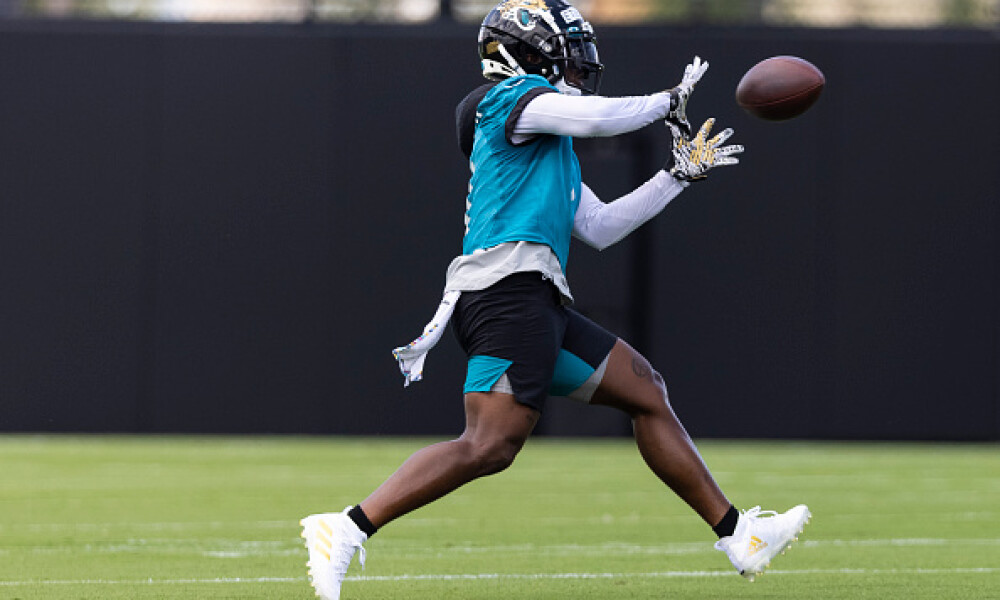 We just wrapped up Week 2 of the NFL preseason games and the fantasy football draft landscape continues to change. Injuries are slapping early-drafters in the face and coaches remain tight-lipped on a number of position battles we’ve been watching. If you haven’t had your league draft yet, you’ve got plenty to digest before heading into the war room. If you have, it’s definitely time to start thinking about that first round of waiver claims. Here’s what’s in the news right now.

When Jaguars running back Travis Etienne left Monday’s game and was seen hobbling around the sidelines, Jaguars fans were left holding their breath in the hopes of nothing serious. Unfortunately, a report from NFL Insider Ian Rapoport reveals that Etienne suffered a Lisfranc injury and will have further tests Monday to determine how long he will be out. Rapoport said that x-rays were negative so the belief/hope is that it is just a sprain, but we won’t know for sure until doctors take a closer look. James Robinson has been dropping in drafts in recent weeks, but that should come to an immediate halt. Not that you should have been letting him drop too far, as Etienne has been utilized more as a receiver in camp than he has been a running back.

With two touchdown catches in the first quarter of Monday’s game, Saints wide receiver Marquez Callaway is going to be shooting up draft boards in a major way. In fact, in the Sports Illustrated Invitational Draft last night, which is a superflex league, Callaway was selected at the beginning of the 11th round among receivers such as Deebo Samuel, Michael Gallup and D.J. Chark. The second-year wideout wasn’t on anyone’s radar until news broke that Michael Thomas would miss the start of the regular season and Tre’Quan Smith went down with an undisclosed injury. Left as the unchallenged No. 1 receiver among a sea of mediocrity, Callaway has definitely stepped up his game and has been the favorite, though also possibly only, target for both quarterbacks. By default, he’s definitely one to watch, but be careful you don’t reach too high for him. Rounds 10 and 11 seem like a fair price right now, but that’s in a normal 12-team league. In a superflex, it might be a round or two later.

Trautman a Sleeper No More?

If you’ve been reading all the tight end articles from Andrew Cooper, you’ve probably been taking Saints tight end Adam Trautman as a late-round sleeper. However, after the first preseason game, it was noted that Trautman was doing more blocking than route-running and questions were arising as to whether or not Juwan Johnson was actually going to be the pass-catching option in New Orleans. Well, we started to see more of the same in Monday’s game and as if to further illustrate the point as to whom you wanted to draft as the Saints starting tight end, Trautman left the field on a cart with an ankle injury. According to a report from Adam Schefter, x-rays were negative but the big tight end was still in a lot of pain. He will undergo an MRI on Tuesday to determine the severity of the injury. Johnson was taken by yours truly with his final pick in the Sports Illustrated invitational, but keep this in mind – Johnson is actually a wide receiver who converted to tight end this summer. On Yahoo, he is still listed as a wide receiver, so watch for potential dual-position eligibility.

Rams new lead running back Darrell Henderson left Monday’s practice with a thumb injury and was immediately shuffled off for tests. We’re being told, at least by Ian Rapoport, that it’s just a slight sprain and head coach Sean McVay joked that the running back still had his thumb, so it looks, for now, like he avoided a serious injury. Still, if you’re drafting Henderson as your RB2, you may want to make that late-round pick on his handcuff, Xavier Jones. It’s not going to cost you much to do it, so better safe than sorry, right?

Sean Payton remains silent on who his starting quarterback will be this season, though many are leaning towards Jameis Winston after a strong showing in Monday’s preseason game against the Jaguars. Winston completed 9-of-10 passes for 123 yards and two touchdowns, both long strikes to Callaway. He looked incredibly comfortable out there, especially in comparison to Taysom Hill who threw a 14-yard touchdown of his own to Lil’ Jordan Humphrey, but seems to look like he was struggling out there at times. Payton says he doesn’t have a timeframe for naming a starter which seems odd with just one preseason game remaining. He could be leaning towards a QB-platoon which some have speculated in the past, but that would be a disaster for fantasy owners.

Speaking of QB-platoons, we’re hearing that as a possibility in New England as well. When asked about it, Patriots head coach Bill Belichick didn’t exactly shoot down the notion. Cam Newton and rookie Mac Jones play two very different styles at quarterback and that would certainly help the mad genius in his never-ending quest to frustrate the opposition. Right now, Newton is dealing with a COVID situation and has to be away from the team until at least Thursday, so that keeps the door open for Jones to work more with the first-team. Again, a potential disaster for fantasy owners, but as we all know, Belichick doesn’t care about your fantasy teams.

Stomp your feet all you want, but it doesn’t look like Trey Lance is going to open the season as the starting quarterback for the San Francisco 49ers. In a recent interview, Head coach Kyle Shanahan implied that, while he would love to say the situation has changed and there is more of a competition, Lance just hasn’t stepped up enough to prove he should start ahead of Jimmy Garoppolo. We expect a shift at some point during the season, but that switch sounds like it’s later rather than sooner. Of course, Shanahan has also been one of the biggest liars when it comes to revealing things to the media, so we’ll just have to wait and see. Consider Garoppolo the starter for now, though.

Bears head coach Matt Nagy announced that Justin Fields would start the team’s final preseason game. That would indicate that he has not wavered from his stance that Andy Dalton will be the starting quarterback for Week 1. I’ve been saying it for weeks now – it was clear that the Bears told Dalton he would open the season as the starter when he signed with the team and that hasn’t changed no matter how good or how much better Fields has looked on the field. Be patient and wait for Week 4 when the Bears play Detroit. They’ll be 0-3 or 1-2, Dalton will be shaky and they’ll put Fields in to save the day. Dalton won’t take a snap again unless the Bears are completely blowing someone out or Fields gets hurt.

As stated up above, Cam Newton will have to be away from the team at least until Thursday because of some misunderstanding regarding testing. He has to stay away because he is not vaccinated and by league rules, any unvaccinated player must stay away for at least five days, even if they are only deemed a close contact. Well, both Cole Beasley and Gabriel Davis are now gone from Bills camp as neither is vaccinated and both were deemed a close contact to a training staff member who tested positive. We’ll see if Beasley throws another tantrum while Isaiah McKenzie and Jake Kumerow get additional opportunities to steal snaps away from him.

There’s also a bit of a COVID scare going on in Dallas right now as CeeDee Lamb was just placed on the COVID/reserve list, joining safeties Malik Hooker and Israel Mukuamu. This is also following defensive coordinator Dan Quinn and defensive tackle Carlos Watkins who landed on the list last week.

Rosen Has a Job…For Now

With news that Falcons back-up quarterback AJ McCarron suffered a torn ACL, the Falcons signed recently-released Josh Rosen. He will compete with undrafted free agent Felipe Franks for the job, though Rosen, despite being the new guy, still seems to have the edge. The Falcons better hope nothing happens to Matt Ryan. Yeesh!

That’s about it for now, but stay tuned as Tuesday’s are always chock full of injury news we weren’t aware of over the weekend.