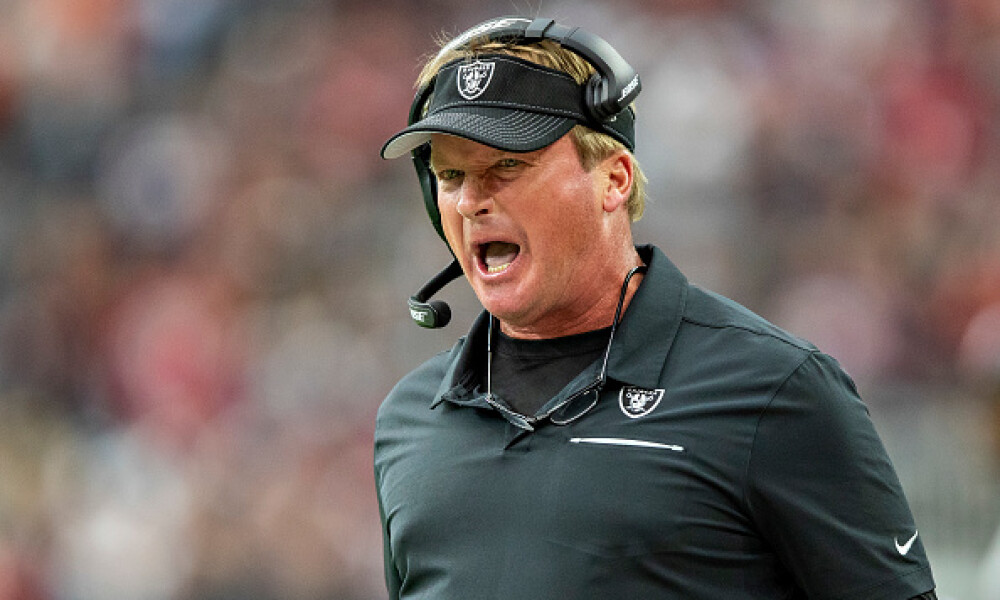 We’ve seen it a million times throughout sports. When a team is struggling and can’t find a way to win a game, the finger-pointing starts and everyone starts calling for the coach’s head. Can’t win? Fire the coach. Can’t score points? Fire the coach. Missed the playoffs? Again? Fire the coach. The list of baseball managers, basketball coaches and hockey coaches fired mid-season is extensive and many of those teams used the change as a stepping stone to bigger and better seasons under the new regime.

It’s a little different in football. Firing a head coach mid-season can be extremely complicated. Each coach tends to bring in his own personnel and the offensive and defensive coordinators are usually working off schemes designed by their superior. Are there exceptions? Of course, but for the most part, head coaches and coordinators are in lockstep with how the squad is run. If you change head coaches and don’t simply promote a coordinator to finish out the season, you’re looking at the players being forced to learn an entirely new scheme. Not ideal.

In 2019, the Redskins fired Jay Gruden after an 0-5 start, but retained his assistant, Bill Callahan to maintain the scheme for, what we thought would be, Dwayne Haskins’ development. The Panthers fired Ron Rivera with just four games to go that season, but again, left the scheme in place. Last year was a bit of an oddity as the Texans fired Bill O’Brien after opening the season 0-4, the Falcons fired Dan Quinn the week after and by the time we finished our Thanksgiving turkeys, the Lions canned Matt Patricia. All three, by the way, predicted by this very same article in last year’s Draft Guide and in all three situations, the teams promoted from within to maintain the schemes.

Since 2011, a nine-year span, we’ve seen 19 midseason firings in the NFL. Match that number up against the other three major sports and you’ll see just how low that number really is. Again, it’s a complicated move to make. But, of course, not beyond the realm of possibility here in 2021 which is why we are here today.

Below is a list of coaches who could find themselves on the hot-seat this year. If they were to be fired during the season, what type of an impact could that have on the players and, subsequently, their fantasy value? There were no real standouts last year after O’Brien, Quinn and Patricia got the axe, so keep in mind, while the fanbase may be ecstatic over the change, there are very few immediate impacts made over the years.

Matt Nagy, CHI – Seems like Nagy makes an appearance in this column every year, yet somehow, some way, he’s eluded the axe during his tenure in Chicago despite the team struggles we’ve witnessed. Perhaps he’s still being remembered for his 12-4 debut (along with Coach of the Year honors) rather than his back-to-back 8-8 seasons, but a trip to the playoffs in two of the three years has kept him gainfully employed. The fanbase is getting antsy and ownership would like to see a step forward this year, especially since they traded up to draft Justin Fields, the new future of the franchise. There are few concerns on the defensive side of the ball, but the Bears offense ranked in the bottom 10 in total points scored for the season. Nagy has long been criticized for relying on too many gimmicks and while more teams are incorporating more pre-snap motion, everyone is getting a little tired of seeing the Bears feverishly moving around with little or nothing to show for on the scoreboard. Andy Dalton is expected to start the season as the team’s No. 1 quarterback, but you can expect a quick hook if he struggles as Nagy is much more concerned about his job than Dalton’s.

Mike McCarthy, DAL – Despite a 6-10 season, McCarthy got a pass for 2020 as losing Dak Prescott and two-thirds of the offensive line is enough to make even the best of coaches a little crazy. But McCarthy was tasked with fixing a lot of other issues with this team, most notably, its defense. The secondary was trash, the linebacker corps needed to get younger and healthier and they struggled to stop the run up the middle. With the offense returning all of its key players and a healthier offensive line, all eyes will be on McCarthy for what he does with the defense. He hired defensive specialist and former Falcons HC Dan Quinn as his new defensive coordinator and their first six picks in the draft were all defensive players, most notably LB Micah Parsons. They also took three cornerbacks in the draft and Quinn recruited former Falcons safety Damontae Kazee. The Cowboys offense is going to be capable of putting up serious points, but if they don’t minimize the damage every week and McCarthy’s record suffers, you may see Jerry Jones get a little antsy.

Vic Fangio, DEN – You can’t be a defensive guru and allow your team to give up the eighth-most points in a season. You just can’t. Is that the Bronocs biggest shortcoming here in the Fangio Era? No, but it certainly doesn’t help your case for future job security. And if you’re going to give your offensive coordinator run that side of the ball, you need someone who isn’t going to run some plain-Jane, vanilla scheme that doesn’t generate any points. Unfortunately, that’s Pat Shurmur and he’s still the OC here. Unless the rumors of Aaron Rodgers landing in Denver come to fruition, Fangio could be the first to get canned this year as neither Drew Lock nor Teddy Bridgewater are strong enough options to lead this offense. Drafting Javonte Williams was a great move and that should help, but they also need to justify the presence of Courtland Sutton, Jerry Jeudy and even Noah Fant, three of the team’s biggest pass-catchers. If the offense sputters to start, look for Fangio to move on from Shurmur and promote QB Coach Mike Shula to OC. If that doesn’t fix this team and put them in a better position, Fangio could be shown the door.

Jon Gruden, LV – The Raiders haven’t made the playoffs since 2016 and owner Mark Davis is probably losing his mind right now. He lured Gruden, one of the franchises top coaches of all-time, out of the broadcast booth (read: retirement) to bring this team back to the forefront of playoff contention and championship lore, only to be presented with a three-year 19-29 record and zero playoff appearances. You can cite the improvements of QB Derek Carr all you want, but Gruden gutted this team’s defense and offensive line upon his return and the outlook for the team’s second year in Las Vegas looks bleak. Their 2021 draft was average, at best, and there were no real impressive changes made via free agency. Unless, of course, you want to say giving Kenyan Drake $11M over two years when you already had Josh Jacobs in the backfield an impressive change. Some have referred to his offensive scheme as archaic and there are questions as to whether or not he’s the right man for the job given the ever-evolving, pass-happy NFL. A mid-season change seems unlikely, but keep an eye on current DC Gus Bradley who has some head coaching experience.

Zac Taylor, CIN – The Bengals brought in Taylor when it was fashionable for a team to hire anyone who had been associated with Sean McVay and many wondered if the 35-year-old QB Coach was ready for prime-time. There is an obvious notion of “Rome wasn't built in a day,” but Taylor has now gone 6-25 through his first two seasons. The Bengals have brought in a wealth of talent, primarily on the offensive side of the ball and ownership is going to demand results and soon. Taylor will get a pass on last year as the offensive line was decimated with injuries early in the preseason and then they lost Joe Burrow to a torn ACL, but another losing season is going to be tough to tolerate, especially given the current roster.