Buzz Cuts: Step Into the Freezer 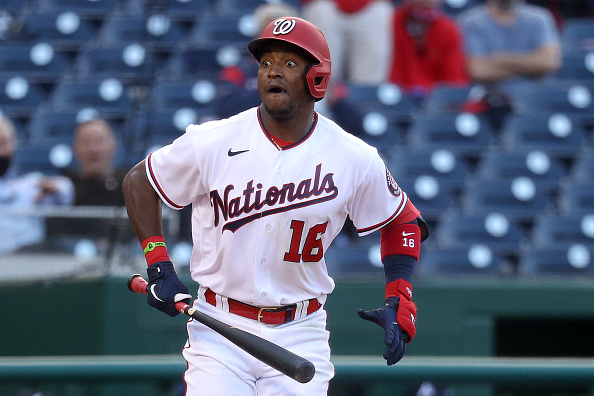 Recently, I had the chance to join one of the fantasy baseball industry’s young, rising stars, 16-year old Jordan Eisen on the Field of Vision Sports podcast to discuss some of the cold starts we’ve witnessed in MLB. First off, I wish I had my head screwed on as straight as he has his at that age. To be that young and have not just the passion to be a baseball analyst, but also have the gumption to put yourself out there and run a podcast is extremely impressive. I highly recommend you give him a follow on Twitter and check out his podcast, specifically, the one with me as a guest!

We discussed a number of players who are off to these horrific, cold starts to the season and tried to figure out A. what the problem was and B. could the player work himself back into the good graces of the fantasy community. Players like Francisco Lindor , José Abreu and Paul Goldschmidt don’t give me much pause. I’ll continue to roll with them and look for their stats to normalize for the most part. Others, however, I’m getting a little more than just frustrated with and am likely to cut bait on sooner than later.

With that, let’s step into the freezer and check in on some of the more frustrating, cold starts. Here are five of my bigger disappointments and whether I expect them to turn things around. I left off both Christian Yelich and George Springer since they’re more casualties of injury, but mark my words, I am VERY concerned about both and am not a happy camper.

Gary Sánchez , C NYY – Let’s just rip the band-aid right off. Cut him. Dump him. He gone! However you want to put it, Sanchez is an albatross hanging from your fantasy team’s neck and he is dragging you down to the bottom. The power is always tantalizing and we’ve actually seen some plate discipline improvements, but overall, he’s just not giving us what we need, offensively-speaking that is. In an OBP league, he’s ok, but he’s losing significant playing time to Kyle Higashioka and there are a number of other backstops who can do better for you.

Brandon Lowe , 2B TB – We expected the strikeout rate to increase with the first power boost we saw in 2019 and then watched when the plate discipline improved and the power maintained last year. That is exactly what we are looking for in a young hitter working his way into the majors. Unfortunately, Lowe has regressed back to his 2019 form where the power is still prevalent but the plate discipline is horrible. Lowe is back to striking out roughly 30-percent of the time and he’s chasing way too many pitches out of the zone. Barrels are back down, hard-contact is down and now he’s starting to sit against tougher lefties. He’s 26-years-old and in his physical prime so there’s hope he can right the ship. Unfortunately, we could zip through half the season like this, so it could be too little, too late by the time he fixes things.

Dansby Swanson , SS ATL – There’s something to be said about a guy who was the first pick overall in the amateur draft, but I don’t know what it is in relation to Swanson. I was actually never a big fan of his and felt relieved that I didn’t buy into the hype as he floundered in mediocrity during his rise through the MLB ranks. The plate discipline never really changed and the spike in batting average we witnessed in 2020 seems more a direct result of a shortened season and high BABIP. Very little has changed for Swanson here in his age-27 year, so if you were looking for an increase in the counting stats from 2019, be prepared for disappointment. It doesn’t look like we’re ever going to see that 20-homer season from him. He’s not a bad player, mind you. He’s just not the superstar many hoped he would be.

Victor Robles , OF WAS – This is the one that’s probably the most brutal of them all. Robles was supposed to be a 20-20 player from the word go and he’s been a colossal disappointment. What’s worse is that he is showing no signs of turning things around. The hard-hit rate is hovering around 18-percent, his barrel rate is down around 1.6-percent and that .226 average is horrendous. People in OBP leagues might be happy with his .333 mark, but what’s he doing once he’s on-base? The guy has two steals to being caught three times and he’s been dropped back down to the eighth spot in the order. So now he loses at-bats getting bumped down the order, his hard-contact rates have never been good at the big-league level so there’s little chance of that power uptick and he’s likely to get the red light with his lack of success on the bases. This one might be the most difficult to let go given the pomp and circumstance upon his arrival, but he’s turned into a major liability for your fantasy teams with little hope of turning it around.

Luis Castillo , SP CIN – What in the world happened to this guy? He went from crushing it despite his home ballpark to hanging pitches up in the zone and getting smacked around by big-league hitters. There’s a slight dip in velocity which has contributed to the drop in strikeouts and extra home runs allowed, but doesn’t appear to be the sole issue. Castillo seems to be way more reliant on his change-up this year and that might be the primary cause. It’s his best pitch, but he’s using it too much to fool hitters who now seem to be waiting on it rather than expecting the fastball. Keep an eye on his next few starts, especially as the weather warms up. If he alters his pitch mix, then there is hope for a turnaround. If you have him on your roster, patience might be your best friend and if you don’t, you might want to make an offer to his owner for 50 or 60 cents on the dollar.