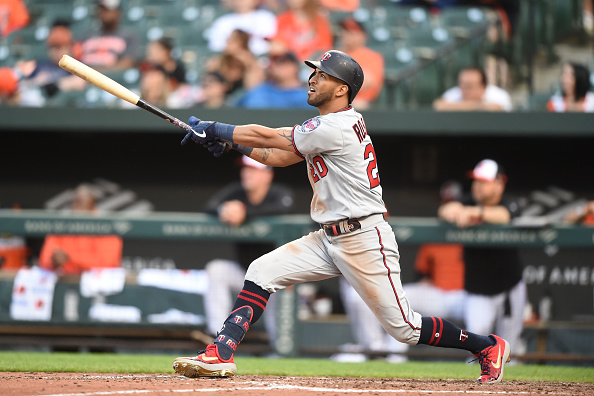 To say 2020 continues to wreak havoc would be an understatement. Amidst a pandemic, economic strife and changing mindsets in baseball front offices, the non-tender deadline on Wednesday brought about a bevy of surprising moves. For starters:

All told, 59 players received a pink slip for the upcoming season which could cause a further divide in the ever changing competition landscape. How teams proceed could bring about a further chasm between the haves and the have nots as rosters get rebuilt. While this sounds like a step back, perhaps the player’s union will be able to receive a better CBA to protect its prospects who may move into the limelight as major league teams change how they value production by a player. Plus, team’s with foresight on how to manipulate the 40-man roster spots saved may result in a player increasing his salary, which also rates as a positive result:

There's a story about this in FUTURE VALUE, but re-upping:

Non-tendering a player not eligible for arbitration may seem odd, but it's the only way to get a player off the 40-man roster without sending them through waivers.

Before delving into the fantasy ramifications of players landing in free agency, a tale of two cities may clarify how this winter may be a volatile one for players. First, Baltimore continues to churn through its roster but cannot get out of the albatross of a contract to Chris Davis . It’s a small sample but the Orioles traded a productive shortstop under the radar on Wednesday:

We have acquired RHP Jean Pinto and RHP Garrett Stallings from the Los Angeles Angels in exchange for INF José Iglesias.

They also decided not to tender a contract to Renato Núñez or Hanser Alberto who spent most of the season in the top half of the lineup with Iglesias. If this means a faster track to the majors for Adley Rutschman, Ryan Mountcastle and Yusniel Diaz, then fine but it may not be until the second half of 2021 or later.

On the other hand, Toronto looks to build on its “Baby Jays” core with a splash this winter:

Per GM Ross Atkins, #BlueJays are active in talks with agents & teams. Jays have exchanged offers in some cases, have clear frameworks in place for other possible moves. “It doesn’t take much at this point for a deal to happen,” Atkins told the Toronto chapter of the BBWAA today.

Will the Blue Jays add George Springer or Trevor Bauer or J.T. Realmuto? Stay tuned but the American League East sets up to be a three-team battle for the top spot in a winter of discontent.

For a full list of the 56 new free agents, click this link to MLB.com to see them. As for the fantasy fallout, here’s the top five players who can search out a new team this season:

From the start of the second half of 2019 through the 2020 season only five relievers own more saves than the 24 notched by Bradley. During this time frame, Bradley’s won four games with a 2.16 ERA and 1.08 WHIP. His 51 strikeouts against 16 walks do not appear as pristine as his small sample in 2020 but Bradley’s been a very solid reliever in this sample. Part of his improvement lies in using a change-up more in the last two years. In 2020, the change-up produced a 38.9 whiff percentage with a 25 percent put away rate. His curve led in both categories in 2019 so it may be a feel thing.

Personally, Bradley may project best as a set-up reliever but his skill set and ability to close out games since taking over in August of 2019 for Arizona makes him an alluring target for teams in the market for high leverage bullpen help. However, where Bradley signs definitely affects his fantasy value. In Cincinnati, he worked in the eighth inning ahead of Raisel Iglesias . So Bradley needs to sign with a team without a closer to regain his former role with the Diamondbacks. Stay tuned.

Real life production versus fantasy does not hold water with a forward thinking front office in Minnesota. Rosario’s $10 million dollar price tag kept him from being claimed which signals a clear shot across the bow of how free agents face a rough winter in the present market. Now, if a team values on-base skills, Rosario’s approach may scare them off. But, in a limited sample size in 2020, Rosario improved his walk percentage from 3.7 percent in 2019 to 8.2 under the watchful eye of mentor Nelson Cruz .

Although it’s early to speculate on a landing spot for Rosario, this tweet hints at a reunion:

Sources: #RedSox have some interest in the non-tendered Eddie Rosario, although he likely would need to handle Fenway's difficult RF. Alex Cora, as GM, selected Rosario for Team Puerto Rico at the 2017 @WBCBaseball.

Since it’s fun, here’s all of Rosario’s line drives and fly balls the last three years with Fenway as the backdrop: 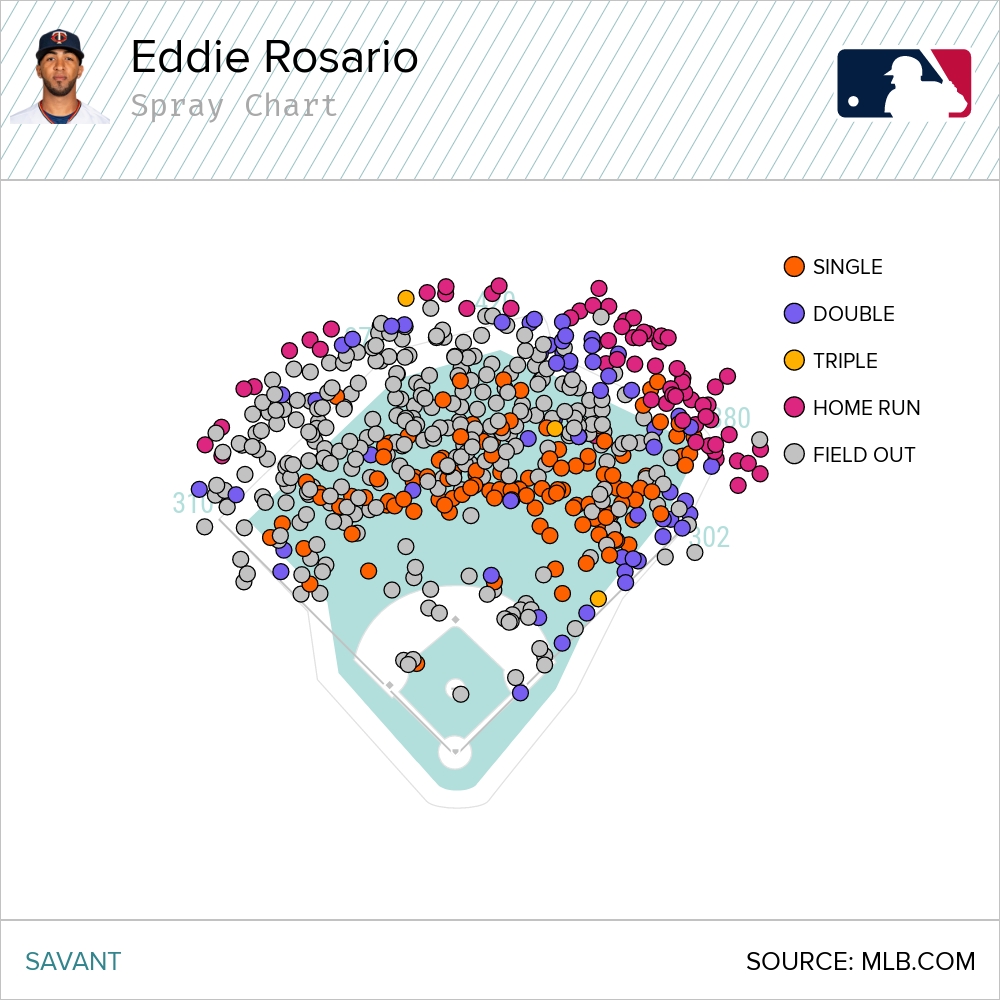 A move to Fenway will not cure Rosario’s on-base inefficiencies, but he could benefit greatly from the Green Monster. Something to tuck away for future use.

Also of note, Alex Kiriloff stands to benefit for fantasy purposes with the inside track to replace Rosario in left field for Minnesota. Using early Steamer projections, here’s how they look:

An underwhelming year for Schwarber to say the least. His on-base percentage plummeted and an early season slump proved too tough for him to overcome. Proof he pressed? Schwarber’s chase percentage rose by four percentage points along with his chase contact. A bigger problem, Schwarber generated ground balls 51.2 percent of his batted ball data while facing a shift over 81 percent of his at-bats. This harpooned his batting average on balls in play (BABIP) while depressing his power.

Schwarber produced 125 batted ball events in 2020 with 14 barrels but his sweet spot percentage dropped by over seven percentage points. So the quality of contact suffered. Part of the fuel to Schwarber’s second half power surge in 2019 lied in his ability to hit fly balls taking advantage of his power.

Taking a larger sample size, from the second half of 2019 through the 2020 season yields 129 games with 481 plate appearances, 67 runs, 31 home runs, 73 RBI, two stolen bases and a more palatable .239/.339/.522 slash. It remains to be seen if the National League the universal designated hitter rule. This affects a player like Schwarber appreciably on the open market.

But it's us, not teams, acting as thought there might be a DH. NL teams are planning as if there will not be one, because that's how things stand and there's still no plan for the sides to meet to change that. https://t.co/dXRimRZO10

One more caveat with Schwarber, will he become a platoon bat? Here’s his career splits versus each handed pitcher:

Curious Schwarber’s slash against right-handed pitching aligns with his second half of 2019-through-2020 sample, right? Use this as a ceiling going forward depending on where he signs. Could a move to a hitter friendly park like Yankee Stadium boost his power numbers? 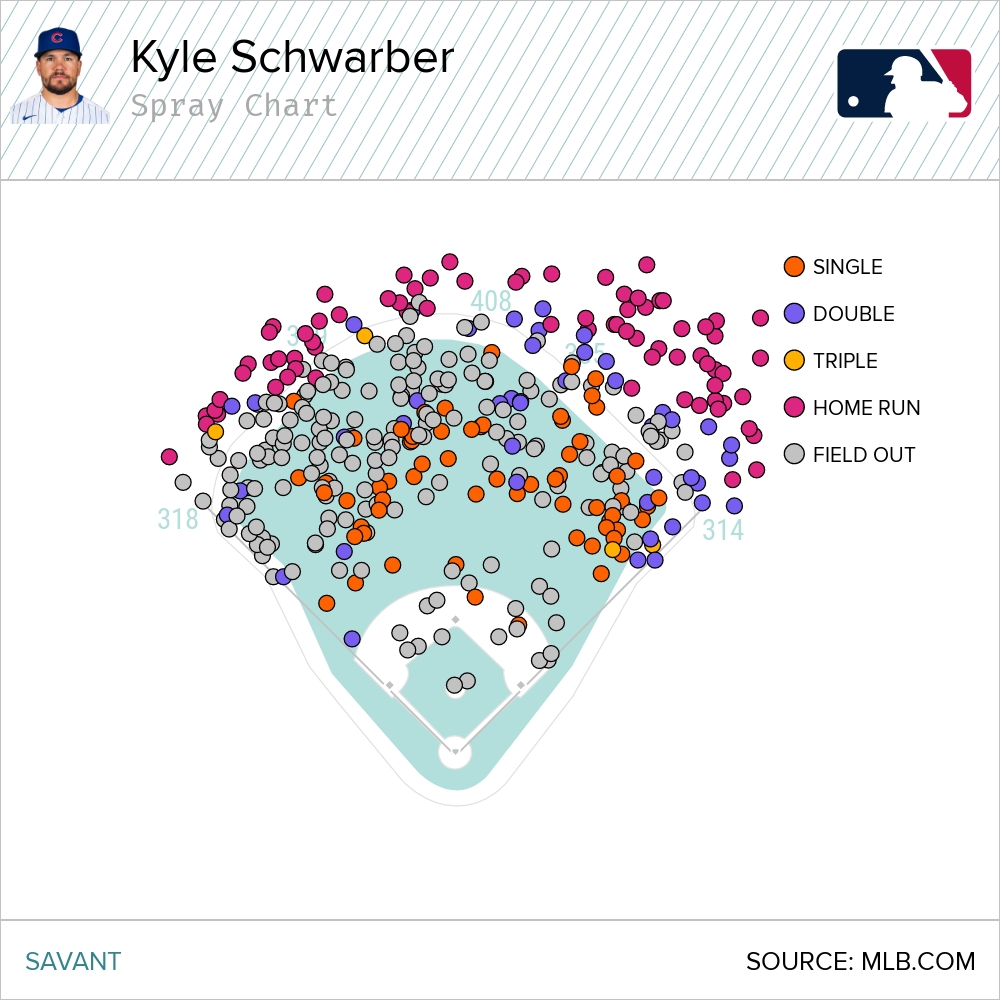 Mercy, someone check on Glenn Colton or Howard Bender.

Duvall faces a similar circumstance to Schwarber in terms of finding a new home. There’s no denying Duvall’s power but he aligns with Rosario struggling to reach base if he does not strike out or launch a home run. A positive, of Duvall’s 17 home runs in 2020, 11 graded out as “no doubters” according to Statcast meaning the home run would leave any ballpark.

Taking a larger sample, Duvall owned a .248/.307/.545 slash over 98 games and 339 plate appearances from the second half of 2019 through the 2020 season. He crushed 26 home runs with a 6.5 walk percentage and 27.4 strikeout rate. Like the players above, where Duvall lands a path to at-bats determines his fantasy value. Take note, his average fell to .226 in the second half of 2020 but Duvall’s skill set suggests streakiness: 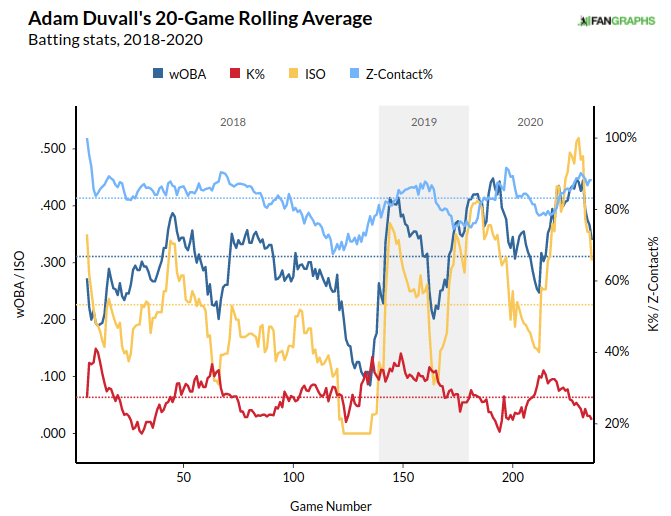 One may wonder why the numbers above leads to Dahl’s inclusion in this article but fantasy owners chase one-year wonders. For instance, Jason Heyward turned in a career year in 2012 with 27 home runs, 21 stolen bases and a .269 average scoring 93 runs while driving in 82. In his seasons since, Heyward stole at least 20 bases two more times (2014, 2015) and hit at least 20 home runs once (2019) but never another 20/20 campaign despite fantasy owners chasing one.

It’s been a rough return on investment for fantasy owners of Dahl recently but his age (27 in April) and allure keeps him on the periphery of fantasy owners. Before taking the plunge this spring, heed his home and road splits:

For perspective, Dahl aligned with Jeff McNeil using a full season of data from 2019 and morphed into Josh Reddick on the road. Tread lightly and heed where Dahl signs. Patience may be necessary.

It may not be a hot stove this winter, but Fantasy Alarm will keep you ahead of the competition with coverage. There’s been four signings so far covered in our Free Agent Tracker and future deals will update as well. One catcher could be in agreement soon:

Mets in active talks with free-agent catcher James McCann, according to league sources. A deal is not yet close, but it is looking increasingly likely he will land a four-year deal.

Some intriguing names who may benefit from the non-tender decisions:

Until next time, stay with Fantasy Alarm across all fantasy formats, stay safe and be well.