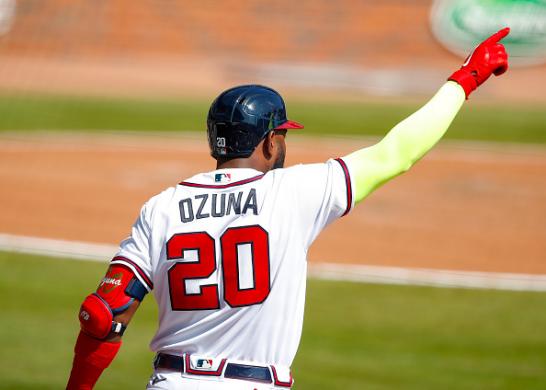 Suggesting 2020 will be a year unlike any other would be an understatement. For fantasy baseball, the 60 game sprint proved to be difficult to navigate. Any league which did not redraft or pause keepers feel like a disservice. Injuries, COVID, doubleheaders, realigned divisional only play by region and many other factors played a role in fantasy which could not be accounted for back in March.

As for the season, the universal designated hitter did not yield the results many hoped from after the adoption of the rule for this unique season. Starting and stopping then restarting the season wreaked havoc on rosters with an influx of elbow, shoulder and soft tissue injuries littering the landscape. Some rookies surged, others struggled and early picks to bust included Christian Yelich , Alex Bregman , Javier Báez and Pete Alonso .

Yelich finished with a .222 average, 107 points below his .329 number from last year cratering his value. Baez finished with the second worst weighted on-base average of qualified hitters along with the third worst weighted runs created plus metric (57) behind Lopez and Eduardo Escobar . Bregman hit .242 with six home runs and Alonso cracked 16 home runs with a .231 batting average.

Due to so many topics to cover, whittling down my list to include those with the most intrigue seemed difficult, but here goes.

Youth is served, Part One

When drafts fire up for 2021, the long lost days of debating about Mike Trout number one may be fading into the distance. In fact, the case can be made for Mookie Betts to be a more universal first overall pick in the upcoming season. When trying to stay ahead of the crowd, talented young stars like Ronald Acuña Jr. , Fernando Tatis Jr. and Juan Soto will be firmly affixed in the first round for years to come.

Despite some injury issues, Acuna Jr. still racked up 14 home runs and eight stolen bases in only 46 contests with a .250/.406/.581 slash line. His strikeout percentage grew to 29.7 percent but his walk rate also rose to 18.8 percent, up over eight percent compared to 2019. Acuna Jr. finished fourth in hard hit percentage at 57 percent of his batted ball data resulting in an exit velocity of 95 MPH or higher. Why focus on something like this?

#Statcast Above average production starts at 95+ mph, which is why we use that point to establish "hard hit" batted balls.

When taking Acuna Jr. at his price point, one needs to enter with eyes wide open chasing the potential for a 40/40 season with the risk of his batting average. Seeing his walk rate rise and the hard hit data continue, Acuna Jr. should settle in close to his .280 average from 2019 but not sure he can hit .300 or higher without cutting the strikeout percentage.

Tatis Jr. led the majors with a robust 62.2 hard hit percentage accruing 102 batted ball events with an exit velocity of 95 MPH or higher. He can be streaky but one cannot deny the production from Tatis Jr. with 17 home runs, 11 stolen bases and 95 runs plus RBI in 59 games. Ranking second in the majors in barrels per batted ball event, Tatis Jr. put the Padres on his back in Game 2 of the playoffs launching two home runs in a pivotal comeback win in an elimination game:

Love or hate his swagger, Tatis Jr., if healthy, could be worthy of the top pick next season. But the depth of his position could move him down some fantasy owners boards.

Last, but certainly not least, Juan Soto deserves more attention than he gets. Soto will turn 22 on October 25th but the start to his career puts him among the best in history:

Trying to discern how to value rookies in upcoming drafts may be difficult given the limited sample size from this year, some players still emerged in 2020. Here’s a few noteworthy breakthroughs:

How do we assess the strong pitching seasons in the Central?

Both Cy Young Award winners could be from the Central divisions with Shane Bieber of Cleveland and Trevor Bauer of Cincinnati. But, could this be attributed to their competition?

NL Central in the shortened 2020 season produced four of the 37 lowest team batting averages *ever* according to Stats Inc., which has data back to 1876. Three - Reds, Cubs, Brewers - made the playoffs and were swept in first round.

Seven teams between the two Central divisions made the playoffs: Chicago Cubs, Chicago White Sox, Cincinnati, Cleveland, Milwaukee, Minnesota and St. Louis, none advanced beyond the Wild Card round. While the White Sox and Twins can hit, should Bieber or Bauer’s results be weighed differently for next year if a “normal” season ensues? New York crushed Bieber for seven earned runs in 4.2 innings in the playoffs but Bauer whiffed 12 in Atlanta during an eventual loss.

Yoán Moncada referenced his battle with COVID-19 affecting him all season long. Scott Kingery shared how fatigue despite his age made this year a struggle. Jose Urquidy missed most of the season cutting short his breakout potential in the Astros rotation. Austin Meadows saw his average crater and his power lag after starting the season late and never seemed to get comfortable at the dish. It remains to be seen how much of a discount future drafts may provide, but if all four enter 2021 at full strength, strong bounce back seasons could be mined at a discount.

Does who catches an “Ace” matter?

Food for thought in regards to how a pitcher works with his battery mate behind the plate. Two examples:

Guess who started behind the plate during Giolito’s gem in Oakland in the playoffs? Free agent McCann who fantasy owners investing in Giolito hope returns to the south side in Chicago. Look to see who Cole throws to the rest of the postseason as well. Will the Yankees insist on Sanchez when Cole works so much better with Higashioka? Stay tuned.

Dripping with upside found in counting statistics, how will fantasy owners treat Adalberto Mondesi and Luis Robert ? Recency bias leans to Mondesi who finished 2020 on absolute fire. Mondesi’s last 22 games featured a .376 average, 22 runs, 14 extra-base hits, 19 RBI and 16 stolen bases. But he’s so erratic. Mondesi owned an on-base plus slugging percentage of .500 in July, .433 in August then 1.130 his last 22 contests. He reached base in 14 of his last 16 plate appearances versus Detroit and tied José Abreu as the only player this year with five straight games of multiple hits with at least one RBI in them.

Robert racked up `11 home runs, nine stolen bases and 64 runs plus RBI this season. He also hit .233 with a .738 on-base plus slugging percentage. In terms of discipline metrics, insert the Spiderman meme with these two power with speed players:

It’s apparent both Mondesi and Robert can produce counting statistics, but can one absorb their propensity to streaks over the course of a full season?

While these two come with inherent risk, the need for power and speed players pushes up their draft capital. Six players recorded double digits in home runs and stolen bases in 2020:

What I learned and a crystal ball for 2021

Every year, I preach not to pay for saves and in one period of FAAB in the NFBC, I overpaid for Jairo Díaz and Cole Sulser. My backup bid for each of them, Rafael Montero saved more games with better ratios. Trust your gut and get the guy in line for saves a week early. Later in the season, on this same team I added Rafael Dolis (for seven dollars) and Bryan Garcia (for four dollars) with each recording more saves for my roster than Diaz or Sulser.

With articles on every site covering streaming pitchers, could streaming hitters be next? Targeting aces earlier in drafts to insulate a pitching staff protecting precious ratio statistics lends itself to targeting undrafted hitters in great situations, especially in this sprint of the season. When one sees its merits, it makes sense. For instance, the winner of the Main Event in the NFBC took a full house approach to his first five picks procuring stud statistics with a hitter in the first round, then three straight pitchers and a hitter rounding out his top five. Like in poker, a full house can go in any order depending on preference but targeting the best player available rings true, but top end pitching runs out quick in most drafts.

Post-hype players always emerge and keep tabs on Dylan Carlson next season. He burned many owners after a slow start with teams feeding him a steady diet of off-speed pitches. However, he turned the corner and carried the gains into the playoffs. Note this chart of his wOBA and O-Swng percentage diverge over the season: 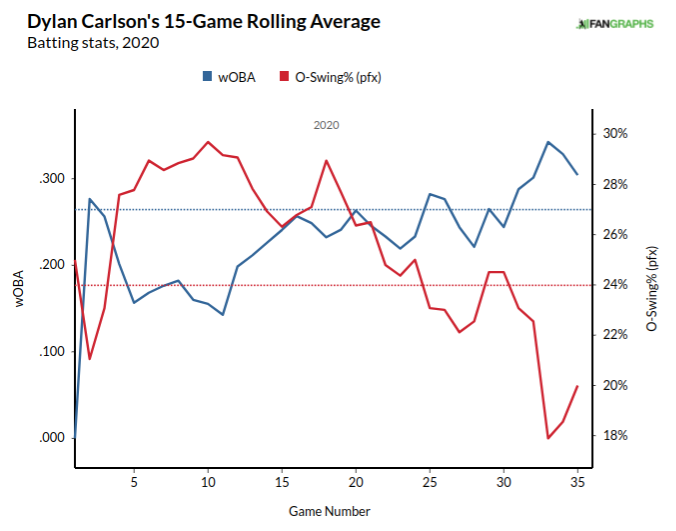 There’s mock drafts already afoot but with focus on the playoffs covering DFS for Fantasy Alarm and recalibrating how to handle player profiles for the upcoming draft guide, this approach best suits my thoughts for the future:

The 80/20 rule for meaningful accomplishment:

Free agency, the pending bargaining agreement, how teams promote players in the upcoming season add layers of preparation mock drafts right now cannot encapsulate. Any fantasy sprint provides lessons to grow as a player and an analyst, 2020 definitely did not fail in this regard. Be safe and be well.

B. Kintzler - RP
MIA1
Marlins declined RHP Brandon Kintzler's $4 million option for 2021.
He will be given a $250,000 buyout instead. Kintzler recorded 12 saves and posted a 2.22 ERA this season, although that came with a 14/11 K/BB ratio over 24 1/3 innings. SportsGrid's Craig Mish reported earlier this week that the Marlins wanted to bring Kintzler back, so perhaps they'll attempt to negotiate a lesser deal.
Added 5:34 pm (EST)
Added 5:34 pm (EST)

R. Osuna - RP
HOU
Roberto Osuna has elected free agency.
Osuna cleared outright waivers and will hit the open market after the Astros decided they didn't want to pay him what he'll command in his final year of arbitration eligibility. He is attempting to pitch through a partially torn UCL.
Added 5:18 pm (EST)
Added 5:18 pm (EST)

C. Devenski - RP
HOU
Chris Devenski has elected free agency.
The Astros didn't want to pay Devenski a raise in his final year of arbitration eligibility after he had elbow surgery last month. He should have a good shot to be ready for Opening Day in 2021 and will receive interest on the open market.
Added 5:13 pm (EST)
Added 5:13 pm (EST)