KBO Round Up: June 5 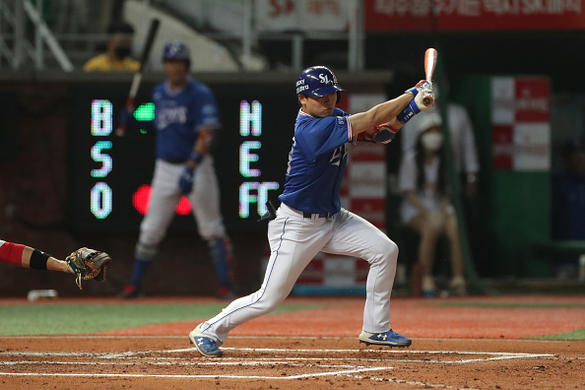 Another day of KBO action ensued while the major league players association and owners rejected each other's proposals to return to playing games. Perhaps its KBO games live on ESPN or the success of import pitchers (for the most part) in the league prompting pitcher formerly known as “The Dark Knight” to seek out employment overseas:

Not sure Harvey could handle the flare players in the KBO play with but highlights like this one remind me baseball should be a game played with passion and fun:

Plenty of bat flips again by first place NC Dinos winning their 21st game and blasting 20 home runs over their last nine contests. For reference, three teams in the KBO own the same number of home runs or fewer for the season. More good news from baseball in Asia with games in Taiwan moving to live fans attending them:

Taiwan pro league puts no limit on fans entering games starting Sunday. Keep in mind there have been ZERO locally transmitted cases of Covid there for 50 plus days. Zero! https://t.co/4kLZ7VROs6

South Korea’s not at this point yet but hoping to bring back fans once Covid-19 cases subside a bit more in their country. Time to transition to the top performances in the KBO from Friday morning.

Not only do the Dinos bats fuel the team’s success, so does the pitching. Mike Wright won his fourth game firing six shutout innings giving up two hits and four walks with seven strikeouts. Wright lowered his ERA to 2.65 with a 1.18 WHIP and 31:16 K:BB through 34 innings this season. If Wright can succeed, can Harvey? Stay tuned.

Ricardo Pinto notched his third win working six innings yielding seven hits, one earned run, and a walk with five strikeouts. Although Pinto carries a 4.15 ERA and 1.70 WHIP, he has made four quality starts this year for the SK Wyverns in six turns.

It’s no surprise Sung-bun Na performed well in the Dinos lopsided victory. He went 3-for-5 with a double, and two home runs (9,10) driving in four and walked.

This marks Na’s third straight multiple hit game and he has homered three times in his last three contests. Entering games on Saturday, Na’s second in the KBO in home runs, tied for first in runs (26) and fifth in RBI (26). Pretty, pretty good.

However, a hidden gem this year for NC, Jin-sung Kang, continues to surge going 2-for-4 with a double, three RBI and this shot:

Kang Jin-sung ya beauty! A 375ft 3R #DinoDinger continues the destruction these #NCDinos are bringing to the #HanwhaEagles!

After accruing enough plate appearances this year, Kang’s robust .443/.500/.716 slash line features the now league leading average and on-base percentage while ranking second in slugging percentage. Kang’s driven in 23 runs in 24 games in 2020. Plus, teammate Aaron Altherr stayed hot with a double, his seventh home run, and two RBI in four at-bats. Over his last 10 games, Altherr’s hitting .382 (13-for-34) with four home runs and 15 RBI. Also contributing to the Dinos win:

In a loss, Roberto Ramos carried the Twins offense going 2-for-4 with the two home runs and three RBI. He’s fifth in the league in batting average (.368) while leading in both home runs (12) and slugging percentage (.800).

Looking ahead to Saturday’s slate, NC Dinos will try to win its fourth in a row with ace Chang-mo Koo on the mound in Hanwha. Koo owns a minuscule 0.51 ERA with 38 strikeouts through 35 innings this season. Doosan sends Chris Flexen up against fellow import Drew Gagnon (Kia) in a tough match-up both teams need to win. Be sure to stay with Fantasy Alarm to remain ahead of the competition as sports continue to resurface across the landscape.