KBO Round Up: June 3 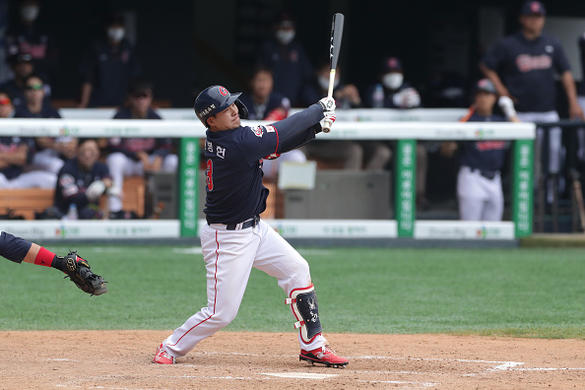 Implosion for import starting pitcher week continued with Casey Kelly giving up eight earned runs on seven hits and three walks in five innings moving his ERA to 6.12 as a result. Hanwha lost their ninth game in a row and its import starter lost a personal streak within it:

#KBO stats: By allowing 4 earned runs in the first 2 innings against Kiwoom Heroes, Hanwha Eagles' RHP Warwick Saupold saw his streak of quality starts (6 IP, 3 ER or fewer) snapped at 17 games. That's the longest such streak by a foreign pitcher and tied for 2nd longest overall.

Saupold still logged seven innings allowing nine hits, six runs (four earned), and four walks with three strikeouts in the loss. More pitching concerns could affect the NC Dinos hold on first place in the KBO. Entering game action this week, the Dinos bullpen owned a 5.35 ERA and although its closer, Jong-hyun Won, ranks first in saves (eight), he’s allowed multiple runs in two straight appearances including yielding a two-run home run in the top of the ninth against the SK Wyverns.

With bullpens under the microscope in the KBO, Samsung will receive a boost in their bullpen soon:

#KBO note: Samsung Lions' RHP Oh Seung-hwan (former Cardinal, Blue Jay, Rockie) is scheduled to return from his 72-game suspension (gambling conviction) on June 9, barring rainouts. Manager Huh Sam-young said he may ease Oh back into action and may not have him close right away.

Seung-hwan Oh notched 42 saves in the major leagues during his time with St. Louis, Toronto, and Colorado with a 3.31 ERA. Oh last pitched for Samsung in 2013 recording 28 saves with a minuscule 1.74 ERA in 48 appearances spanning 51.2 innings with 54 strikeouts. He could anchor the bullpen once he’s ready. Speaking of the Lions, they won a 12-6 contest at the LG Twins with Won-seok Lee making some history:

Before delving into the performances of note in the KBO from Wednesday, a reminder for the NC Dinos about this time of unrest does not go ignored across the globe:

There were limited options on this slate due to the top tiered pitchers struggling, but Kia’s crafty southpaw Hyun-jong Yang recorded his fourth win working six innings allowing two hits, one earned run, and a walk with four strikeouts. He moved to 4-2 on the season with a 4.22 ERA, 1.25 WHIP and his fourth quality outing in six starts.

Hyeong-jun So of the KT Wiz also notched his fourth win tossing seven shutout innings against Doosan working around two hits and three walks while striking out two. So owns a 5.34 ERA but he’s 2-0 against Doosan, the defending KBO champion.

As alluded to above, the top performance on Wednesday goes to Won-seok Lee going 3-for-4 with a double, his fourth home run, and eight RBI along with a walk against the LG Twins. This marks Lee’s second home run in four contests, and he moved into fourth in the KBO in RBI (25) as a result.

Although I cannot translate, sure this refers to Lee’s day being pretty, pretty, good. Teammate Tyler Saldino extended his personal hit streak to seven with his fifth straight multi-hit game. Saladino went 2-for-3, scored three runs, hit his fourth home run, drove in two runs, and walked twice. During his streak, Saladino’s 13-for-26 with three doubles, three home runs, and 12 RBI. Two other Lions also turned in strong days at the dish:

A key to the NC Dinos remaining atop the KBO in the standings resides in its ability to rebound after a loss. Scoring eight runs and holding on late, they moved to 19-6 on the year. Plus, one of its players on the major league radar continues to flash his power:

While Roberto Ramos and Jose Fernandez receive the most hype in the KBO, Mel Rojas Jr. continues to thrive hitting a home run for the third straight game and his fourth within them. Rojas Jr. finished 3-for-5 blasting his eighth home run driving in three. He’s now tied for first in runs (23), tied for second in home runs, third in RBI (26) and ranks in the top five in each category of his robust .417/.460/.738 slash line. Also helping the Wiz to victory:

Looking ahead to Thursday’s slate, the NC Dinos will send import ace Drew Rucinski to the mound searching for his fourth win. Kiwoom’s Eric Jokisch hopes to fuel his team to a sweep in Hanwha while the home team tries to avoid losing its tenth in a row. Kia hopes Aaron Brooks can get them the series win and Woo Chan Cha will try to halt the LG Twins two game losing skid.

One note of interest for Brooks facing Lotte, this tweet:

The #LotteGiants have achieved the ignominious record of allowing opposing pitchers to go 5 IP+ in 26 consecutive games, a KBO record.

After a hot start, Lotte’s struggled to find footing, losing seven of their last 10 games. Be sure to stay with Fantasy Alarm across all fantasy formats to remain ahead of the competition.