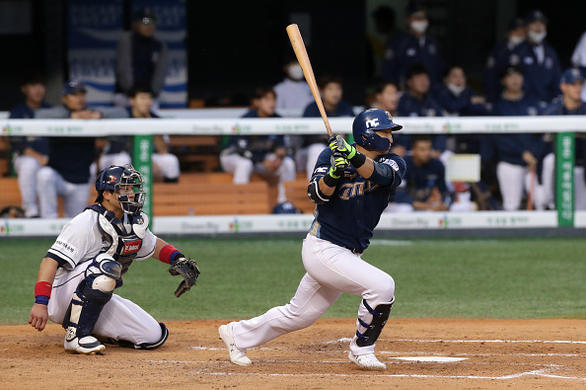 Another wild morning in the KBO with less than inspiring performances on the mound across the slate and another late comeback win by the team off to the hottest start in the league:

Representing your translator, the Dinos posted nine runs in the top of the ninth entering the inning down by one run. A pinch runner scored the then tying run and later homered in the inning adding to the fray. NC moved to 12-2 on the season and leads the KBO by three games over the LG Twins. There’s also more than one way to win late in games. It’s been noted in the telecasts on ESPN, the infields in Korea appear to play faster and this bounce helped Kiwoom to a walk-off win in the 10th inning:

Well there’s one way to get a walk-off win.

Before delving into the game action, some injury news of note:

#KBO injury update: SK Wyverns' RHP Nick Kingham (elbow) is expected to miss at least 2 more turns in the rotation, his manager Youm Kyoung-youb said. The manager wants to give Kingham as much time as necessary, so he'll come back and stay healthy the rest of the season.

Potentially good news on Nick Kingham , it remains to be seen how soon he returns to the SK rotation, but they need him back as soon as possible. Also:

Injuries are piling up in #KBO. Both Jae-il Oh (rib) and Jae-hwan Kim (foot) are out of the line-up for #DoosanBears. Both are not considered serious, but number of injuries are definitely alarming.

These injuries seem like day-to-day situations but using Oh in DFS could be dicey since rib injuries linger, especially if intercostal. Now it’s time to take a whirl around the KBO from Thursday’s five game set.

Kia’s Ki-young Im lasted eight innings using only 90 pitches allowing five hits, one earned run and striking out four leading the slate. Im moved to 1-2 on the season but lowered his ERA from 5.63 to 3.38 after this outing. Entering the contest, Im owned a 2.95 FIP which he migrated towards with this strong outing.

Joining the rotation, at least for Thursday, LG Twins pitcher Min-ho Lee notched his first win of 2020 working 5.1 shutout innings giving up one hit and four walks with two strikeouts. While his strikeout to walk ratio will not jump off the page, his win at a low price made him a worthy flier on Thursday.

It seemed like a tough loss on the road loomed for the Dinos until a nine run outburst in the ninth propelled them to their 12th win in 14 games. Keep tabs on lead-off hitter Min-woo Park who left the game favoring his leg. It may not be serious, but he could need a day or two off this weekend. Here’s the top performances in the comeback win:

Once games end on Thursday, teams hit the buses and travel for their next three-game series. Here’s this weekend's match-ups:

With sports ramping up and potentially more restarting on the horizon (NBA and NHL), be sure to stay with Fantasy Alarm to remain ahead of the competition.

MLB Acuna (wrist) expected to be ready on Wednesday

MLB Santana homers, drives in four in win over Pirates

MLB Montas strikes out 13 over six scoreless in finale

J. Adell - RF
LAA1
Under adjusted MLB rules for the shortened 2020 season, Angels outfielder Jo Adell will not qualify as a rookie going into 2021.
Diamondbacks catcher/outfielder Daulton Varsho, Dodgers reliever Brusdar Graterol, Mets shortstop Andres Gimenez, and Indians reliever James Karinchak are among the players also impacted by the adjustment. The original rule had rookie qualifications at fewer than 130 at-bats or 50 innings pitched or fewer than 45 days on the active roster of a major league club with a 26-man roster limit, but that obviously didn't account for a shortened season and 28-man rosters. This new rule does and includes service time in September. Also of note, whomever wins the Rookie of the Year in both leagues this year will not be eligible to win again in 2021 even if they still qualify as a rookie.
Added 9:12 am (EST)
Added 9:12 am (EST)

B. Buxton - CF
MIN1
Twins manager Rocco Baldelli said Sunday that the club is hopeful that Byron Buxton (concussion) will be ready for Tuesday's opener in the AL Wild Card round.
Buxton missed back-to-back games over the weekend after being hit in the head by a pitch on Friday, but Baldelli said he felt better Sunday that he did on Saturday. It's a good sign, but he's not out of the woods yet. He'll continue to be monitored closely before the Twins make a decision about his readiness.
Added 9:01 am (EST)
Added 9:01 am (EST)

D. Betances - RP
NYM
Dellin Betances said Sunday that he "hasn't given any thought" to whether to exercise his $6 million player option to return to the Mets in 2021.
The option comes with a $3 million buyout, so the question is whether Betances thinks he can do better than a one-year, $3 million deal in free agency. That's no sure thing, as Betances missed time with a lat injury this season while struggling with a 7.71 ERA and 11/12 K/BB ratio over 11 2/3 innings, though he did show improved velocity in his return during a scoreless outing on Saturday. Betances' contract with the Mets also includes a player option for 2022.
Added 8:56 am (EST)
Added 8:56 am (EST)

R. Odor - 2B
TEX
Rougned Odor homered twice and drove in four runs on Sunday, leading the Rangers to an 8-4 victory over the Astros.
Odor blasted a three-run homer off of Chase De Jong in the fourth inning, turning a 3-1 deficit into a 4-3 lead for the Rangers. He then victimized Nivaldo Rodriguez for a solo shot in the fifth inning, extending their lead to 7-3. With his 2-for-3 effort on Sunday he wraps up a disappointing 2020 season hitting .167/.209/.413 with 10 homers and 30 RBI.
Added Yesterday 9:17 pm (EST)
Added Yesterday 9:17 pm (EST)

L. Taveras - CF
TEX
Leody Taveras went 2-for-5 and drove in a pair of runs on Sunday, helping to lead the Rangers to victory over the Astros.
The 22-year-old delivered a two-run single in the fourth inning to extend the Rangers' lead to 6-3. He also reached on a bunt single in the seventh inning, then proceeded to swipe second and third base before scoring on a throwing error. With the two-hit effort, Taveras finishes his rookie campaign hitting .227/.308/.395 with four homers, six RBI and eight stolen bases in 33 games.
Added Yesterday 9:16 pm (EST)
Added Yesterday 9:16 pm (EST)

S. Huff - C
TEX
Sam Huff went 1-for-3 and drove in a run on Sunday as the Rangers topped the Astros in their season finale.
The rookie backstop got the Rangers on the board with an RBI single in the second inning. He then walked and came around to score on a RBI single by Leody Taveras in the fourth inning. The 22-year-old backstop certainly made the most of his opportunity this season, slashing .355/.394/.742 with three homers and four RBI In 31 at-bats.
Added Yesterday 9:16 pm (EST)
Added Yesterday 9:16 pm (EST)

J. Lyles - SP
TEX
Jordan Lyles lasted just three innings in a no-decision against the Astros on Sunday, allowing two runs on four hits and a pair of walks.
The 29-year-old hurler struck out four on the afternoon. Two of the three runs scored against him came on solo home runs -- one by Jose Altuve in the first and the second by Carlos Correa in the fourth. Lyles finishes a miserable 2020 season with a 7.02 ERA, 1.56 WHIP and 36/23 K/BB ratio across 57 2/3 innings. He remains under contract for one more season with the Rangers at $8 million.
Added Yesterday 9:16 pm (EST)
Added Yesterday 9:16 pm (EST)

J. Altuve - 2B
HOU1
Jose Altuve belted a solo home run as the Astros fell to the Rangers in Sunday's regular season finale.
Altuve tagged Rangers starter Jordan Lyles for his solo shot in the opening inning. He also drew a walk in the game, finishing the day 1-for-2 with a pair of runs scored. The 30-year-old had an extremely disappointing season at the plate, slashing .219/.286/.344 with five homers, 18 RBI and two stolen bases in 48 games.
Added Yesterday 9:16 pm (EST)
Added Yesterday 9:16 pm (EST)