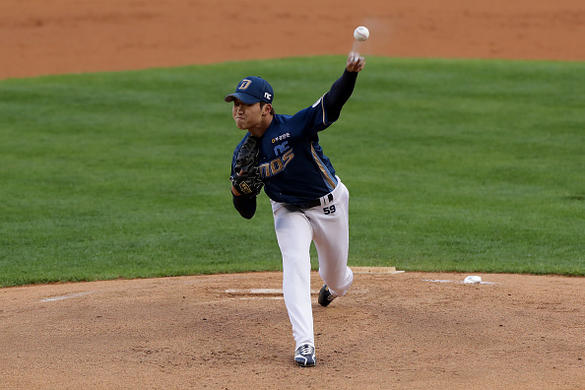 In a refreshing change, the Wednesday slate of games in the KBO featured strong pitching performances. Doosan outlasted the first place NC Dinos 2-1 in 11 innings, handing the Dinos only its second loss of the season. Kia shut out the Lotte Giants behind six shutout frames from import Drew Gagnon. Plus, the SK Wyverns snapped their ten-game losing streak with a 5-3 win at Kiwoom. Not only did pitching rule the slate, but some defense as well with this diddy by the Kia Tigers:

While players and owners in the major leagues continue to bargain about how to proceed with a season, the KBO sets its eyes on bringing fans back to the stadiums:

Of course, any news about bigger crowds comes with concerns but it’s encouraging to see live sports gain footing going forward. Now for the rest of the game action from the KBO on Wednesday.

Drew Gagnon fired six shutout innings, allowing two hits and two walks with nine strikeouts en route to his first win in the KBO this year. Gagnon overcame his early inning struggles for an ace effort. Through 16.1 innings, his K:BB stands at 23:5 with an enticing 12.7 K/9 rate in a league where strikeouts remain in high demand among starting pitchers.

In a pitcher’s duel in Doosan, Chris Flexen recorded ten strikeouts over 108 pitches spanning eight innings giving up four hits, one earned run, and two walks during a no-decision. Flexen’s 22 strikeouts versus four walks through 20 innings adds to his appeal in DFS action. Chang-mo Koo could not register his third win in as many starts this season but notched his third quality start, firing eight innings yielding two hits, one earned run, and one walk with seven strikeouts. Koo leads the KBO in ERA (0.41) and tied for first in strikeouts (25) representing a strong triumvirate of starters on the NC Dinos staff.

Tyler Wilson of the LG Twins represents the hard luck loser on the slate firing seven innings in a quality start allowing four hits, three runs (two earned), and a walk with six strikeouts. His last two starts show promise in Wilson’s 13:3 K:BB in 13 innings with a 2.77 ERA and 0.85 WHIP in them. Chae-heung Choi of Samsung racked up his KBO leading third win against LG tossing six innings giving up four hits, one earned run, and one walk with two strikeouts.

In a lopsided victory, Je-seong Bae recorded his first win of 2020 throwing seven shutout frames allowing six hits and two walks with three strikeouts. Bae’s also registered three quality starts in as many outings this season with a 0.89 ERA through his first 20.1 innings of work.

There’s a new home run leader in the KBO after this titanic shot on Wednesday:

Roberto Ramos with an absolute bomb. Just a moonshot. Look at this majestic thing. pic.twitter.com/Fb0vxIeWMS

Although Roberto Ramos continues to be undervalued by price in DFS contests, his strong start in the KBO cannot be ignored. Not only did he launch his sixth home run, Ramos also leads the league in on-base plus slugging percentage with a robust 1.407 mark through his first 13 games. Pretty, pretty good.

Why digest all the information about the KBO? Well, for one it’s live baseball. Also, if playing DFS, our own James Grande called this shot:

SK needs Jamie Romak to return to past power production and he is heating up at the plate. Romak finished with two hits in five at-bats while scoring three and driving in one. Teammate Tae-hyuk Nam went 3-for-4 with a run and two RBI helping the Wyverns snap a ten-game losing skid.

Thursday’s contests feature no import pitchers on the mound so delving into their data will be tantamount to success on the slate. Be sure to stay with Fantasy Alarm across all fantasy formats to remain ahead of the competition.