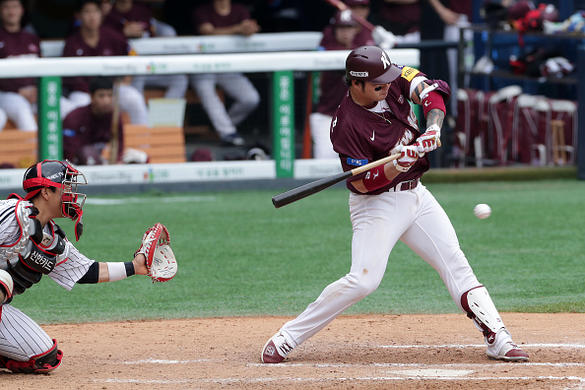 On a slate dominated by runs fueled by leaky bullpens, the KBO kicked off its third week of games. Fans remain banned from attending Korean sporting events, but teams continue to find ways to fill the seats, some with less controversy than others:

Imagine if they had a mascot referred to as 'Swole Daddy'... https://t.co/EK4dZ8kuD2

At least this move by the SK Wyverns will not make anyone uneasy:

Radishes are placed in the SK vs NC match.

This radishes even sits one space apart to prevent Corona 19???? pic.twitter.com/svzIyU3AUd

With runs come home runs making choosing starting pitchers a risky venture during Tuesday’s contests. Four of the ten teams recorded double digits in runs, and the NC Dinos escaped with another one run victory. Here’s the action worth noting in today’s Round Up.

William Cuevas finished allowing five hits, four earned runs and a walk while striking out seven in 6.1 innings. His first win this year looked nicer before his return to the mound in the seventh. Tiring in the top of the inning, Cuevas yielded a hit, hit a batter, recorded a strikeout, and then a run scoring single before being lifted. Both inherited runners came around to score with the Wiz bullpen ceding nine runs in the half-inning. Focus on Cuevas’ 16:5 K:BB with a 1.04 WHIP rather than his bloated ERA.

Chang-gyu Lim moved to 2-0 on the season tossing six innings giving up seven hits, four earned runs, and a walk with six strikeouts. His ERA rose to 3.75 but he owns an enticing 13:1 K:BB with a 1.08 after two starts.

Although the NC Dinos helped Mike Wright garner his second win, he issued as many walks (five) as strikeouts (five) yielding four hits but no earned runs over his five innings. Wright’s 1.69 ERA comes with a 16:8 K:BB and 1.31 WHIP. He needs to attack hitters more to depress traffic on the bases if he is to succeed the second time around the league. Dinos reliever Jong-hyun Won notched his KBO leading fifth save getting the last four outs of the game with two strikeouts while giving up one hit.

One of the headliners of the DFS playbook, Baek-ho Kang went 3-for-4 with two runs, a double, tied for the league lead with his fifth home run, drove in three and walked in five plate appearances. Better yet, Kang’s gaining the nickname of “Korean Papi” at the tender age of 20 flourishing so far with a robust .367/.500/.833 slash line while hitting safely in each of his first 12 contests. Here’s the other notable hitters from the Wiz’s slate leading 13 run out-burst.

While runs ruled the day on Tuesday, Wednesday’s match-ups could lean more towards the pitchers. Looking to bounce back, Doosan sends Chris Flexen versus NC Dinos “ace” Chang-mo Koo. Tyler Wilson (LG Twins) looks to build on his last outing with seven strikeouts in six innings. Also, can Drew Gagnon (Kia) overcome his early inning struggles to cash in on his strikeout potential and keep tabs on who Lotte sends to the mound?

Be sure to stay with Fantasy Alarm across all formats. James Grande will rock out the playbook for the KBO later today while Matt Selz and Dan Malin update the upcoming NASCAR race at Darlington on Wednesday.