Greg Jewett recaps the past week of KBO action with top performances and stories. 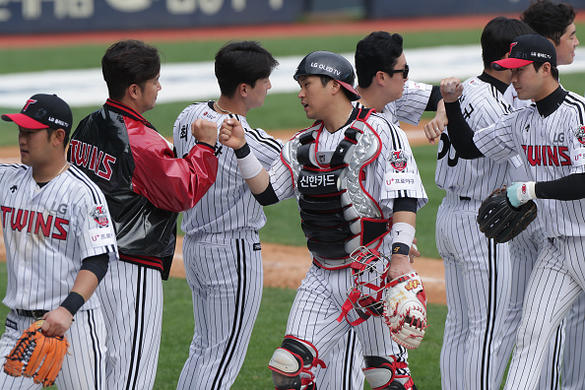 With two weeks in the books, some early trends continue to take shape. Research into the baseballs reveal no change in them compared to 2019 when runs and home runs declined across the KBO. However, through 57 games this season home runs litter the landscape with an average of two per game (114 home runs) compared to only 98 being hit in the first 55 games last season.

There’s a couple of factors contributing to the spike in power. First, hitters own higher exit velocities on line drives and fly balls starting 2020 while pitchers lost time to prepare for the season due to Covid-19. In this article by Jeeho Yoo of the Yonhap News in Korea, he explored data provided by Sports 2i:

For the cliff notes, here’s some of the findings with MPH included in parentheses when referencing the data’s metric findings:

What does this mean? Well, this quote from Yoo’s terrific article could provide valuable insight for the KBO and if the MLB resumes games in July:

“The unusually long spring training and disruption to the exhibition schedule, both caused by the COVID-19 outbreak, may have affected pitchers more so than batters this year. Batters came into the regular season well rested, while starting pitchers, after having their careful preparations thrown off track, were not fully stretched out to begin the season.”

Even elite pitchers may struggle early on in any truncated season with less preparation with shorter time to get ready. This also reflects in the data provided above along with games starting in warmer weather in May in the KBO compared to March and April. Once again, this residual effect could result in the MLB during its potential shortened schedule. With games in July at the onset, heat and humidity will favor the rested hitters while pitchers gain footing building up arm strength along with their repertoire of pitches. This could really be a factor in any upcoming redraft leagues for fantasy baseball.

Another of a reduced spring training, injury issues. Player continue to land on the KBO’s first run of an injured list. Once again, less time to get one’s body ready to compete wreaks havoc, especially on the hamstrings:

Copious hamstring injuries in the first month of the season are a very real thing, to the point that scientists did a study on it: https://t.co/wanOLEOeLd

One of the summations of the article includes pitchers tend to suffer hamstring injuries running to first base. Hence the proposal of a universal designated hitter for 2020. It also shows players suffering an early injury to the hamstring could incur another one later in the season. Just another wrinkle for fantasy baseball players to potentially contend with.

As for the KBO, standings seem to be evolving with the NC Dinos hot start fueling their rise atop them:

An intriguing to start this week’s matchups with NC heading to defending KBO champion Doosan. This will test the Dinos pitching staff with the potent offense of Doosan led league leader in multiple categories on offesen, Jose Miguel Fernandez:

Noting how many “imports” reside at or near the top of these categories underscores the importance of their production. Currently, three teams import bats reside on the injured list: Samsung’s Tyler Saladino (leg), Hanwha’s Jared Hoying (back) and Taylor Motter (personal). Plus, Ben Lively of Samsung could miss time with a hand injury suffered in his last start. As for the pitchers, here’s the leaders in wins and ERA:

For the analytical crowd, the top-five in FIP and strikeouts minus walks rate as well courtesy of Fangraphs:

Thanks to the data provided above, here’s some players of note heading into Week 3 in the KBO:

Currently slashing .479/.519/.729 with eight multiple hit games among his first 11 for the Bears. Fueled by an inflated batting average on balls in play means migration to the mean, but right now it appears Fernandez remains locked in. Seeing how he fares versus the surging Dinos staff could be a nice barometer of his performance going forward as Fernandez tries to become the second player in league history with 200 hits in a season.

Tied for the league lead in home runs, Tucker received a bonus when he launched it on Sunday:

Preston Tuckers hit a car and get it. #KBO https://t.co/6tQBqwh01S pic.twitter.com/gwQLhlyRU3

Tucker’s hitting a robust .444/.510/.911 with six walks versus three strikeouts spanning 41 plate appearances. He also leads the KBO in on-base plus slugging percentage (1.421) and looks to stay hot with the power in the days ahead. Plus he the owner of a brand new car. Key on Tucker’s aggressiveness attacking first pitch fastballs in a league predicated on working ahead in the count and pitching to contact.

So far so good for Ramos with a .378/.477/.784 slash with four home runs but only seven RBI for the Twins. He lost an eight-game hit streak but seems to be adjusting well to his new surroundings in the KBO. If he continues to adjust to left-handed pitching, look out.

Only 20 years old, the talented Kang keeps raking in the KBO:

Kang’s recorded 15 hits in 51 plate appearances with 10 of them resulting in extra-bases (five doubles, one triple, four home runs). This resonates in his .756 slugging percentage and 1.148 on-base plus percentage. Hosting Hanwha the next three days, Kang could be adding to his home run title sitting in second in the league behind Tucker and Dong-min Han (SK).

Withe more games on tap starting on Tuesday morning, be sure to stay with Fantasy Alarm to remain ahead of the competition.