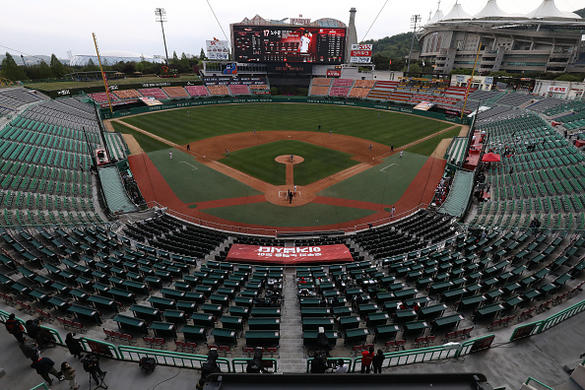 Another day and another import hitter putting up a monster game. However, on Saturday Preston Tucker of the Kia Tigers stole the limelight from Jose Miguel Fernandez of Doosan. Tucker racked up three doubles plus this shot during a perfect day at the plate:

Preston Tucker with his 4th HR of 2020. He is now tied for the early league lead with Han Dong-min and Kim Jae-hwan. #KBO #KiaTigers pic.twitter.com/LCp0QadynP

During the ESPN telecast of the Kia win, Tucker’s college coach referenced his former player’s flat swing for his success driving the ball to the opposite field and able to pull the ball for power as well. Tucker left the game after running the bases late in the game but Kia reported it being precautionary due to the lopsided score. Entering game play on Sunday, Tucker leads the KBO in RBI (19), on-base percentage (.543) and on-base plus slugging percentage (1.468) while ranking second in home runs.

In the standings, the NC Dinos won their ninth game of the season with a late inning comeback versus the SK Wyverns bullpen. Plus, the LG Twins swept a doubleheader from Kiwoom causing a ripple effect in the standings. While DFS players await word on Tucker being in the lineup Sunday, here’s the rest of the results from the KBO on Saturday.

Dong-min Han (OF) - Launched his KBO leading fifth home run driving in one among his two hits and also walked pacing the Wyverns offense as usual. Take a look:

Han Dong-min with his 5th HR of the season. He's the early season leader. His career high was 41 in 2017 and that was good enough for 5th place. In 2017 the HR champ was his teammate Choi Jeong with 46. #KBO #SkWyverns pic.twitter.com/vS01Ygja3m

During the Twins sweep of a doubleheader at home, Ju-hyeon Jung led the way in Game 1:

Did Jung Ju-hyeon of the LG Twins just have the greatest inning in baseball history?

He makes two incredible run-saving plays in the field to hold onto a 1-0 lead, and then goes deep with a majestic bat flip to lead off the bottom of the inning. #LGTwins #KBO @MyKBO pic.twitter.com/hSCoWVMQrj

Looking past the hyperbole in the tweet, Jung made two nice plays and hit his second home run of the season for the Twins. Also of note:

A bounceback outing for Casey Kelly winning Game 1 of the doubleheader versus Kiwoom. Kelly tossed six shutout innings yielding three hits and two walks with five strikeouts en route to his first win of the season.

Sunday’s slate features Drew Rucinski of the NC Dinos trying to help his franchise to their 10th win of 2020 on the road against the SK Wyverns. A tough match-up between Eric Jokisch (1-0, 0.82 ERA) faces LG Twins starter Woo-chan Cha (2-0, 3.75 ERA).

With MMA fights on tap Mike Alexander provides terrific coverage and a live NASCAR race (Matt Selz and Dan Malin) on Sunday, be sure to stay with Fantasy Alarm to remain ahead of the competition. Plus, if interested in Esports check out the great work by Sean Mitchell.

MLB Kiermaier (wrist) in Rays' lineup for Game 1 of WS

M. Muncy - 1B
LA1
Max Muncy (head) told FOX Sports' Ken Rosenthal that he is "fine" for Game 1 of the World Series on Tuesday night against the Rays.
Rosenthal provided that update live on MLB Network. Muncy took a ground ball to the face, just below his right eye, while participating in infield practice on Tuesday evening at Globe Life Field, but he got treatment and then popped back out of the clubhouse for a full round of batting practice. The 30-year-old slugger will start at first base and hit cleanup in World Series Game 1 versus the Rays and right-hander Tyler Glasnow.
Added 6:12 pm (EST)
Added 6:12 pm (EST)

M. Muncy - 1B
LA1
Max Muncy was struck in the face by a ground ball while participating in infield practice before Game 1 of the World Series on Tuesday.
Jon Morosi of MLB Network notes that Muncy "walked calmly to the clubhouse for treatment" by the Dodgers' medical staff and returned to the field around 12 minutes later to take live batting practice. It sounds like he avoided a serious injury. Muncy is currently slated to start at first base and beat cleanup for the Dodgers in World Series Game 1 on Tuesday night against the Rays and right-hander Tyler Glasnow.
Added 5:19 pm (EST)
Added 5:19 pm (EST)

K. Kiermaier - CF
TB
Kevin Kiermaier (wrist) is in the Rays' starting lineup for Game 1 of the World Series against the Dodgers on Tuesday.
He will start in center field and hit eighth versus Clayton Kershaw. Kiermaier was limited to a bench role in Games 4-6 of the ALCS after taking a pitch off his left wrist in Game 3, but he played all nine innings of Saturday's Game 7 victory and it sounds like he should be at or near full strength leading into the Fall Classic.
Added 4:45 pm (EST)
Added 4:45 pm (EST)

Y. Díaz - 3B
TB1
Yandy Diaz is starting at first base and batting leadoff for the Rays in Game 1 of the World Series on Tuesday versus the Dodgers.
It'll be his first turn at leadoff since Game 4 of the American League Division Series against the Yankees. The full World Series Game 1 lineup for Tampa Bay: Yandy Diaz 1B, Brandon Lowe 2B, Randy Arozarena DH, Hunter Renfroe RF, Manuel Margot LF, Joey Wendle 3B, Willy Adames SS, Kevin Kiermaier CF, Mike Zunino C. Tyler Glasnow is on the mound, facing off against Dodgers left-hander Clayton Kershaw.
Added 4:39 pm (EST)
Added 4:39 pm (EST)

J. Urías - SP
LA1
Dodgers manager Dave Roberts said Julio Urias is available out of the bullpen for Game 1 of the World Series against the Rays on Tuesday.
Urias threw the final three innings to close out Game 7 of the NLCS against the Braves on Sunday, but Roberts hasn't ruled out using him if needed. Ideally, that won't be necessary. The Dodgers haven't settled on a Game 2 starter just yet and Urias is in that mix too, potentially.
Added 3:35 pm (EST)
Added 3:35 pm (EST)

L. Campusano - C
SD
Padres prospect catcher Luis Campusano was arrested Saturday in Georgia and charged with felony marijuana possession.
Campusano was allegedly found with 79 grams of marijuana in his car when he was pulled over early Saturday morning in Grovetown, Georgia, near his hometown of Augusta. He was released on $5,000 bond. According to Georgia law, possession of more than one ounce (28.35 grams) of marijuana is a felony and punishable up to 10 years in prison. The Padres acknowledged the arrest on Tuesday, but are offering no further comment at this time. One of the organization's top position prospects, the 22-year-old Campusano homered in his first MLB game (he only appeared in one regular season game) before being included on the Padres' playoff roster.
Added 2:44 pm (EST)
Added 2:44 pm (EST)

S. Sánchez - SP
MIA
Marlins manager Don Mattingly doesn't consider Sixto Sanchez a lock for the team's rotation going into 2021.
Sandy Alcantara, Pablo Lopez, and Elieser Hernandez are the locks in the rotation, according to Mattingly. However, he believes Sanchez and Trevor Rogers will have to earn it. “We know what Sixto showed he’s capable of,” said Mattingly. “We’ve also seen some downsides to that and areas he needs to grow. So that will be more discussions. Trevor Rogers is in that same boat. You see upside, but you also see things that, would it help him to continue to develop?” Sanchez posted a 3.46 ERA over his first seven starts in the majors before making two starts (one good, one not so good) during the postseason. We wouldn't look too much into Mattingly's words just yet, as he surely wants Sanchez and Rogers to come to camp with something to prove. Barring injury, Sanchez is going to make a major impact with the Marlins and fantasy leagues next year.
Added 2:06 pm (EST)
Added 2:06 pm (EST)