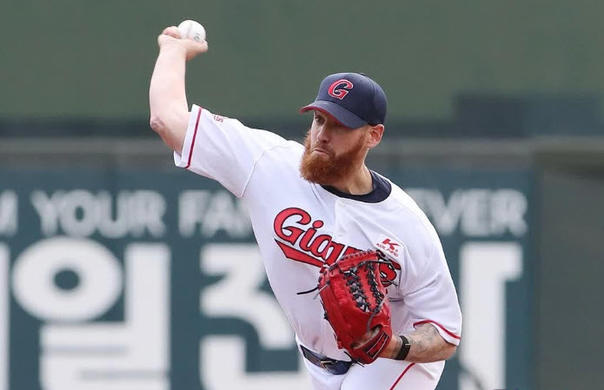 Although rain threatened play in all five contests slated for Friday, only one succumbed to the elements:

#KBO: Kiwoom Heroes-LG Twins game in Seoul has been canceled; they'll play a double header Saturday, beginning at 2 p.m. Looks like 4 other games are good to go

As stated in the tweet, Kiwoom and the LG Giants will match-up in a doubleheader on Saturday which affects any DFS play. This means two seven inning games so there will be fewer at-bats possible for whichever game DraftKings puts on the slate. Another thing to monitor in the early KBO games is bullpens. Leads can evaporate and runs litter the landscape as games move to the high leverage innings. One standout thus far gets covered in this column:

Cubs fans may remember Jin-young Kim. Kim is back in the KBO after a rough 2019 campaign and off to a fast start in 2020. He’s retired nine of the 14 batters faced with a strikeout (64.3 strikeout percentage), including the last six Kim’s faced. Hitting 87 MPH on the radar with his fastball and touching 90 MPH, Kim hopes to anchor the Hanwha bullpen for a return to the playoffs. However, most relievers nibble in the KBO and this prompted some research. Entering game play on Friday, here’s how the bullpens stack up so far:

As can be seen, most bullpens yield runs in bunches late in contests. In fact between the ten teams, 44 home runs against their relievers highlight the volatility. This not only affects which hitters to target in DFS match-ups, it also can point to which teams can close out wins with better bullpens behind them. There’s time for statistics to settle in but it’s worth noting.

During Friday’s action, the NC Dinos closer of the day, Chang-min Im issued four walks leading to the tying run scoring with two outs on a bases loaded free pass. That is less than optimal. Im’s team bailed him out scoring four runs in the top of the 10th against SK Wyverns beleaguered bullpen for their eighth win in nine games. Hanwha’s Woo-ram Jung notched his third save of the season preserving his team’s fourth win of the season.

Also, another team lost two players to the new KBO injured list and it could affect its status going forward

Imports often determine how a team fares in the KBO. Hanwha’s off to a rough start with three wins over the first nine contests. Now, it potentially loses Nick Kingham in the rotation and one of its most productive hitters in Jared Hoying. Last year, Hoying hit .284/.343/.460 with 18 home runs and 22 stolen bases in 124 games.

As for the games on Friday, the Doosan offense continues to flourish reaching at least seven runs for the fifth straight game. Only one hitter has eclipsed 200 hits in KBO history but Jose Miguel Fernandez continues his quest to become the second. Fernandez recorded 197 hits in 2019 and he’s off to a scorching start to the 2020 season with 17 hits over his first 34 at-bats prior to Friday. He then went 3-for-4 with two singles to right field (his pull side) and a double to left-center raising his average to .526 on the season while on pace for an unsustainable 320 hits over 144 games. He’s also notched multiple hits in seven of his first nine contests for Doosan. Here’s the rest of the action around the KBO on Friday.

During a no-decision, SK’s Seung-won Moon recorded the most strikeouts on the slate with seven over six innings on 96 pitches giving up seven hits, two earned runs and a walk.

Jae-hak Lee of the Dinos turned in a quality start working six innings allowing two hits, one earned run and a walk with four strikeouts. He lost a chance for his second win when his bullpen took a walk on the wild side.

It was a not so great day for Dan Straily . He only pitched 4.1 innings on 96 pitches giving up seven hits, two earned runs and three walks with four strikeouts. It is important to note the KBO does not require all mounds on its ballparks to be set at the same height. This could be a factor for pitchers working on the road if their arsenal does not translate to certain parks.

Exploded for 14 runs on 16 hits in a blowout win over Samsung on Friday. Here’s the hitters of note from the Wiz:

Process all the information and once again track the weather heading into Saturday’s slate. Also remember Kiwoom and the LG Twins will play a doubleheader (seven inning games) with imports Jake Brigham matching up with Casey Kelley in Game 1. Hanwha sends ace Warwick Saupold to the mound to face the Lotte Giants as well in an attempt to move closer to .500 on the season.