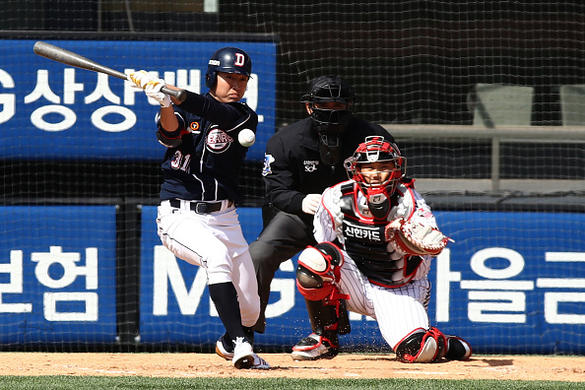 Another day and more bullpen struggles in the KBO. Although Kiwoom’s closer San-woo Jo recorded his fourth save in as many tries, the KT Wiz lost another late lead:

Sung-bum Na ties the game with 2 run shot in the bottom of 9th. #KTWiz bullpen blows another W for Despaigne. Wiz had the lowest bullpen ERA in ‘19, but it’s off to a disastrous start in ‘20.

In other game action in the KBO, Doosan moved into a tie for first place winning 11-6 in Lotte against the previously undefeated Giants along with the NC Dinos all with 5-1 records. Two homegrown Korean pitchers led the slate with eight strikeouts apiece and home runs continue to litter the landscape including the league leader adding to his total:

With all this in mind, here’s the rest of the action from Tuesday in the KBO recapped in the Round Up.

Just missing the top of the strikeout total on Tuesday, the best performance goes to Eric Jokisch of the Kiwoom Heroes. He tossed six innings giving up three hits, one run (zero earned) and struck out seven. Through two starts, Jokisch owns a 1-0 record with 11 strikeouts versus one walk and one earned run against.

Min-woo Kim of the Hanwha Eagles lost a bid for a win due to his bullpen but worked seven scoreless innings yielding one hit and three walks with eight strikeouts.

Joining Kim with eight strikeouts, Woo-chan Cha of the LG Twins garnered his second win despite allowing four earned runs on six hits and two walks versus the SK Wyverns.

During a no-decision, Kia’s Aaron Brooks turned in a quality start working seven innings giving up seven hits, one earned run and striking out four lowering his ERA to 1.29 in the process.

One more quality start on the day logged by Ben Lively of Samsung. Lively incurred the loss to Kiwoom allowing four hits, two earned runs and a walk with four strikeouts over six innings. His ERA sits at a respectable 3.00 and better days loom on the horizon for Lively if he keeps pitching well.

Entering the day one game out of first place, Doosan took advantage of a favorable match-up in Lotte defeating the Giants 11-6 in the highest total on the slate highlighted by the following batters:

Kim Jae-hwan with a little oppo taco action for HR #3 of the season. He's sitting 1 shy of the league lead. #KBO #DoosanBears pic.twitter.com/UH45fTEoCf

Putting up the second highest run total on the day, the LG Twins scored nine runs on 12 hits in a win over the SV Wyverns with two players racking up four hits including:

And the LG Twins lead 5-3. pic.twitter.com/NffUXR7DOT

His teammate Roberto Ramos did not suffer the same fate on this swing:

Roberto Ramos is wasting no time proving his value to the #LgTwins in his 1st #KBO season. Here is HR #3 of the season for him. pic.twitter.com/sRmfq8q0Kj

Moved into a three-game tie atop the KBO in a comeback win at home without some of its top players including catcher Eui-ji Yang still sidelined with a hamstring injury. But, they still scored seven runs on 12 hits:

During their first loss of the season, the Giants still plated six runs. One on this solo shot:

While Howard Bender cringes on the bat flip, the KBO celebrates them. Jeon finished with two hits in five at-bats, his third home run and one RBI. Other Giants of note include:

Once again, the aptly named Dong-min Han left the yard to maintain the KBO lead in home runs (4):

Han finished 2-for-3 with four RBI.

Perhaps the record of the KT Wiz (1-5) keeps talented young hitter Baek-ho Kang off the radar but it’s my job to keep him front and center. First:

Baek-Ho Kang with his third dong of the year to put kt Wiz back on top. This dude's power is very real. pic.twitter.com/JLqIEZAYbn

Mentioned in my segment that this guy would go in the first round of the draft this year if eligible, maybe the top half of the first round. He’s good! https://t.co/HxC8Ecxhwt

Matt Selz tells me the 2020 draft could have been one of the deepest in recent memory. Seeing Kang could land near the top of it speaks to his ceiling as a hitter. Two other teammates also chipped in with the Wiz getting 14 hits on Tuesday:

Kiwoom disappointed only scoring three runs but Dong-won Park racked up two hits along with his first home run of the season. Preston Tucker doubled going 1-for-2 but also walked twice with teams starting to pitch around him. Teammate Ji-wan Na of the Kia Tigers hit his first home run in a win over Hanwha despite Jared Hoying tallying two hits, including a double in four at-bats driving in one.

Preparing for the Wednesday slate in the KBO, import Mike Wright (1-0, 3.00 ERA, 7:1 K:BB) takes the mound for the NC Dinos at home versus the KT Wiz. Fellow import Ricardo Pinto also looks for his second win for the SK Wyverns. Pinto worked 6.2 innings his first start striking out three and allowing one earned run. Young-ha Lee of the Doosan Bears takes the mound for Doosan against the Lotte Giants with a 1-0 record and 1.42 ERA. Other pitchers of note will be David Buchanon trying to add length to his starts for the Samsung Lions desperate for a win on the road in Kiwoom.

Be sure to check back later for the KBO playbook by James Grande. Also, stay with Fantasy Alarm to remain ahead of the competition across all fantasy formats.