Greg Jewett goes around the KBO and gives you the news and notes from the first week of the league, and what we need to look to in the coming days 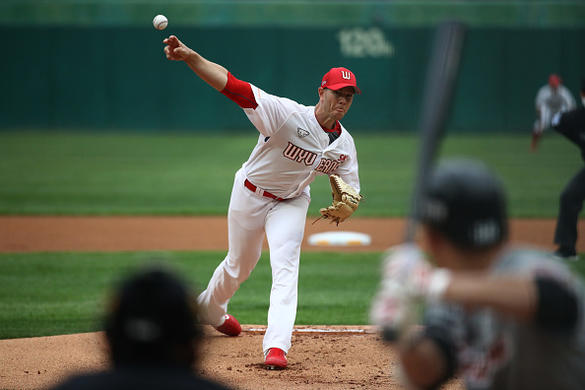 Baseball enthusiasts remain cautiously optimistic about the return of the MLB in the United States. Until then, fans of the sport can continue getting their fix from South Korea’s KBO. After one week, the standings seem out of sorts compared to last year when the Lotte Giants finished last in the standings:

Fueled by the successes of imports Dan Straily and Dixon Machado , the Giants hope to stay hot with games against last year’s KBO champion Doosan on tap. As for Straily, he racked up 11 strikeouts his last outing giving up no earned runs and owns a 1.42 ERA, 2.50 FIP, and 15:3 K:BB through 12.2 innings in Korea. He’s tweaked his arsenal so far with great results:

Dixon Machado has hit more home runs in five KBO games than he hit in 172 career games for the Detroit Tigers. https://t.co/TNS5m1yYuH

Other match-ups to start the week include the injury riddled NC Dinos hosting the KT Wiz, the Kia Tigers head to Hanwha, Samsung faces Kiwoom, and SK Wyverns oppose the LG Twins.

There are some interesting trends to track in the KBO starting with how de-juiced the baseballs actually are compared to pre-season reports:

#KBO Balls juiced? - Spoke to a couple of players (pitcher and position player) and both seemed to believe that baseball are diff from last season.

“We didn’t even HRs in BP last year” said one position player that I spoke to earlier today. #KBODK

Plus, this tidbit of information:

#KBO Rumblings alert - Are the balls juiced back? Kyung-hang News is reporting that HRs are up 13% and slugging is up 11%.

Spoke to a prominent official and he was convinced that the old baseballs are back in play. Interesting to see if this upward trend cont this week.

It remains to be seen if the uptick in power continues in the KBO, but there’s bigger concerns with a second wave of the Coronavirus making headlines:

Prior to the late start of the KBO’s season, any player testing positive results in the league shutting down for three weeks. Armed with a new deal to televise games on ESPN, this would be a detriment to the league’s recent popularity. Which forces the league to be even more vigilant:

#KBO must now operate as if 2nd wave is already here. Players/staff must be re-educated. 1st week of baseball was great but its way too early for a celebration. We are 1 player positive case away from 3 week league wide shut down.

Players must STAY home when not at games!

As for the games themselves, noting the spike in home runs and runs so far in the 2020 season as well as how imports perform becomes even more important. Updating the charts from the KBO primer, here’s how this year’s numbers compare to last season after one week:

Pressure could mount on Taylor Motter (.150/.190/.300) of the Kiwoom Heroes and Tyler Saladino (.150/.227/.350) of Samsung. If Roberto Ramos of the LG Twins improves versus southpaws, he could reach the 30 home run total predicted by his manager. Ramos launched his first two home runs during Sunday’s win by the LG Twins. Preston Tucker sits in the top four in weighted runs created plus (237), on-base plus slugging percentage (1.465), and isolated power (.429) while toting a robust .476/.560/.905 slash line walking four times versus one strikeout through 25 plate appearances for the Kia Tigers.

This does not even include Jose Miguel Fernandez of Doosan currently leading the KBO in batting average (.591) through his first 22 plate appearances. He hit his first home run on Sunday and he’s logged multiple hits in four of his first five contests.

After one week, there are three hitters tied with three home runs:

Chang-pyung Kim, also of the SK Wyverns leads the league with five stolen bases with three players tied for second with two apiece. With so few starts by pitchers, the results can be skewed but focusing on strikeouts to walk ratios, here are some standout performers so far:

Taking all of this into account, this week could provide more intel to how much the baseball can be juiced for the rest of the season. Be sure to stay with Fantasy Alarm across all fantasy formats to remain ahead of the competition. Plus, James Grande and I will continue to produce KBO DFS playbooks for the #FAmily.