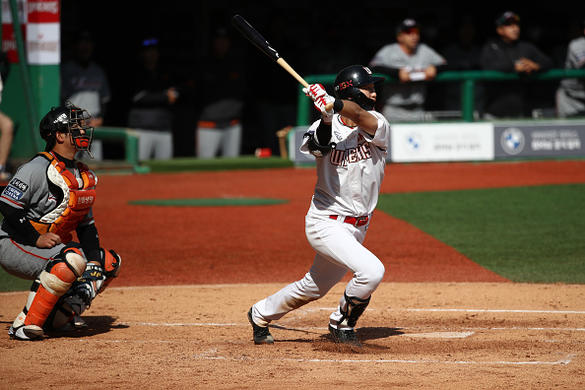 Coffee and the KBO provide me with a sense of normalcy. Being capable of viewing baseball in the early morning in New York keeps hope alive for sports to return in the United States. As for action from South Korea, both the NC Dinos and Lotte Giants moved to 4-0 with different types of wins. My Dinos racked up 13 runs on 13 hits while the Giants won via a walk-off wild pitch capping a contest highlighted by six home runs between the two teams:

Lotte Giants win their home opener on a wild pitch in the bottom of the 10th and advance to 4-0 on the year! pic.twitter.com/MIGefGe44Y

Both James Grande and I have adopted the NC Dinos as our team to root for, and if you are looking for a team to adopt based on your MLB fanship, here’s a flow chart courtesy of Levi Weaver of The Athletic

A few days ago, I told you that Rangers fans should root for the @NCdinos_fan in the KBO. Then @sahadevsharma asked who Cubs fans should pick… This led to a flow chart (attached) which in turn became an entire story including recs for all 30 teams: https://t.co/GiNIG3L5LN pic.twitter.com/pF70667ZbD

Do not get lost in the sauce, just follow along the chart without getting lost, right Charlie?

In an effort to streamline the information in the KBO Round Up, myKBOstats.com publishes the scoreboard of all five scores:

Samsung and the KT Wiz garnered their first wins of the season on Friday and the standings evolve. However, with 140 games still on tap, there’s plenty of time. In terms of production, runs continue to litter the box scores, so targeting pitching will be tantamount to DFS success.

An interesting tidbit before delving into the results, Eduardo Perez noted how Drew Gagnon tipped his pitches while facing the Samsung Lions. When throwing his fastball from the wind-up, Gagnon held his glove higher but fanned his glove prior to a change-up. Not only keeping viewers interested in the game, this type of analysis grabbed my attention. It also signals a need for Gagnon to adjust with only ten teams in the league which could inhibit his strikeout upside if tipping his pitches. Great stuff and now for Friday’s fantasy tidbits.

Breaking through for their first win, the Wiz pounded out 22 hits en route to 12 runs. While Mel Rojas Jr. gets most of the interest from DFS fans states side, do not forget about this young stud:

This is Baek-ho Kang smacking himself a double. He's basically KBO Rafael Devers /Juan Soto . Only 20 years old and already a top 10 hitter in the league.

Here’s the team’s hitters of note from Friday’s explosion:

As noted above, the Dinos scored the most runs on Friday with 13 on 13 hits rolling to their fourth win.

Prior to the start of the season, Lotte invested in a process to add to their win total. Signing Dixon Machado represented an upgrade at shortstop paying immediate dividends even if he did not hit well in the KBO:

However, Machado is also raking including his second home run on Friday among his three hits driving in two:

A SWING AND A DRIVE!

Dixon Machado ties the game in the 8th for the Lotte Giants with a solo blast. pic.twitter.com/gnSSoBjQ86

His teammates also chipped in as well:

In a tough loss on the road to Lotte, the Wyverns plated eight runs in a wild game.

Playing in a plus-hitter park, the Lions recorded their first win with an import leading the way.

With an eye on Saturday, rain could be a part of the DFS process. Some key rules in the KBO could emerge

It may rain in Korea on Saturday, which could lead to 1st rainouts of #KBO season. Double headers and Monday games (Mondays are normally off-days in KBO) will come into play starting the week of May 12. Will try to explain some rules in this thread...

It may rain in Korea on Saturday, which could lead to 1st rainouts of #KBO season. Double headers and Monday games (Mondays are normally off-days in KBO) will come into play starting the week of May 12. Will try to explain some rules in this thread...

If there’s rain, those playing cash games will need to remember this:

This is all in an effort to get the full 144 games into the tight window this year (May-Nov. instead of the usual March-Oct.). No All-Star break this year, either, which opens up extra days into which to squeeze more games.

In terms of statistics, not only does myKBOstats.com do a terrific job, more good news from Fangraphs:

It is apparent sports remain a vital part of many lives, myself included. Be sure to stay with Fantasy Alarm to digest all the great work across all formats. James Grande and I will keep the KBO up to date, there’s plenty of football information publishing daily along with the latest in NASCAR from Matt Selz.