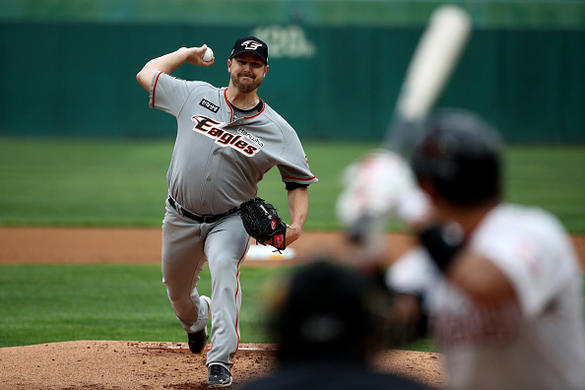 Many baseball fans rejoiced with the return of a live contest on ESPN early Tuesday morning. For staunch supporters of the MLB, perhaps the KBO will not be for you, but sports in any form during this pandemic represents hope. In an effort to recap today’s results, the Round Up will cruise through the box scores mining the tangible bits of information. First, check out Opening Day in the KBO:

With seven of the ten starting pitchers being imports, some familiar names surfaced in the results. As for offense, playing with a reduced flight baseball the Kiwoom Heroes racked up 11 runs in a win over the Kia Tigers with the LG Twins scoring eight runs and the Lotte Giants seven while two teams suffered shutouts (SK Wyverns, Samsung Lions).

Off to a strong start to the season, Warwick Saupold (Hanwha Eagles) tossed a complete game shutout needing only 101 pitches. He limited the SK Wyverns to two hits with two strikeouts and issued one walk in an efficient effort KBO teams crave from their rotation. Plus:

In a no-decision, Dan Straily (Lotte Giants) logged 5.2 innings on 97 pitches giving up three hits, two earned runs and three walks with four strikeouts. Opposing him, Odrisamer Despaigne (KT Wiz) shined in his KBO debut working six innings yielding four hits, one earned run and striking out eight on 83 pitches. Despaigne may fare well in early outings versus new teams but comes with inherent risk since he can implode at any time. For DFS though, he’s a terrific target for tournaments.

Another import, Drew Rucinski (NC Dinos) garnered his first win of 2020 tossing six shutout innings, allowing three hits and four walks with six strikeouts. Rucinski could put together another solid year for the Dinos if his slider stays this nasty:

Man oh man does Drew Rucinski - @DrewRucinski - have his SL working so far against the Lions. pic.twitter.com/hD9AO2XJxn

Last, but not least, Korean born Woo-chan Cha went six innings giving up three hits, one earned run, and two walks with seven strikeouts on 101 pitches for the LG Twins in their win over the defending champion Doosan Bears. Here’s a look at Cha’s curve:

In an effort to streamline the game action, here’s each team’s players of interest by runs scored in descending order from Cinqo de Mayo:

Some may remember Hyun-Soo Kim from his days with the Orioles:

Speaking of familiar faces in new places, Dixon Machado paid immediate dividends to the Giants in his KBO debut:

Plus, hit teammate Jun-woo Jean showcased his bat flipping capabilities which come with the territory in the KBO:

Needing a team to adopt during this KBO affair, it’s going to be tough to resist the Dinos mascot:

Loaded with a potent offense, the Dinos could be fun to root for.

Both the Samsung Lions and the SK Wyverns suffered shutouts in their season openers.

News from the Yonhap News Agency, both Casey Kelly and Tyler Wilson of the LG Twins will not start in the opening series due to quarantine rules during the KBO’s shutdown. They project to return this weekend when the Twins face the NC Dinos on the road.

For a sneak peek at travel in the KBO, check out the Dinos team bus:

No one suggests anyone needs to track or watch the KBO, but it’s fun featuring bat flips and for the baseball purists, it provides a glimpse of better days to come for the MLB.

Be sure to stay with Fantasy Alarm and ahead of the competition.