Greg Jewett takes a look at the possibility of baseball playing in Arizona, in two cities, or three cities and how that could impact baseball in general, but also fantasy value of certain players 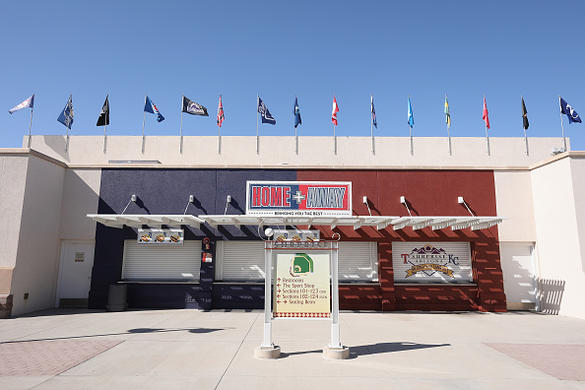 It seemed surreal watching the NFL draft on Thursday night. A welcomed break from binge watching a show and focusing on sports. With morning coffee and a little Taiwan professional baseball becoming the new normal, it raises the question of when major league baseball will decide on the best-case scenario for a return. With many NFBC drafts already in the books, many leagues reside in purgatory pushing back drafts or auctions in order to take advantage of any wrinkle of realignment or games played in different stadiums.

Commonly known as the butterfly effect, values of players could fluctuate depending on how much change occurs if baseball can resume play. Not only due to the range of outcomes using Arizona only, Florida and Arizona only, hubs in Arizona, Florida and Texas or whatever plan gets agreed to by owners along with the athletes. Since the two state leagues could resume play with 15 teams in each one, the hub plan comes with some juggling. Trying to produce a balanced schedule with an uneven number of teams in each hub seems difficult.

With deference to the terrific article by Evan Grant of the Dallas News, his article can be accessed via this link on Twitter:

Rangers column: Some might criticize Globe Life Field as a multi-events center. But that's exactly what baseball needs right now. Answers to your questions about how Arlington fits into MLB's ideas to re-open the seasonhttps://t.co/ra5BTLIYG6

For the crib notes, it speculates on at least eight teams using Texas as a hub with games in Houston’s Minute Maid Park and Texas’ new Globe Life Field plus headquarters in nearby minor league facilities or university complexes for teams in the region. This includes Frisco’s Dr. Pepper Ballpark, Round Rock’s Dell Diamond, and Corpus Christi’s Whataburger Field. It appears the minor league season could be scrapped altogether so “depth” teams would stage at the facilities in the event of replacing an injured player or a call-up to join the major league team.

As for the tricky part, taking teams from each state to balance the numbers of teams in three hubs. Using obvious candidates like Houston and Texas plus teams in the central time zone, Grant’s list includes:

Baseball could pull Colorado from the Arizona division since it resides in the mountain time zone pushing the number to eight, but this cuts the Cactus League to nine teams causing more potential headaches. In order to resolve this, perhaps leaving Colorado in Arizona keeping it with 10 teams may result in shifting two more teams from Florida to Texas making for 10 team divisions in each “hub”. Noting this remains speculative, this scenario could end up like this: 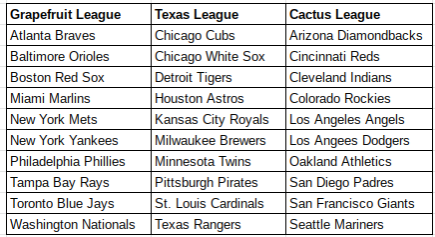 Taking Pittsburgh and Detroit from Florida to the Texas hub could create three 10-team divisions. Play each team 12 times for a universal 108-game schedule. Detroit reunites with divisional foes such as the Twins, White Sox and Royals while Pittsburgh joins St. Louis, the Cubs and Milwaukee in this hypothetical scenario. Of more interest, getting hitters from Arizona teams and pitchers in Florida would be a logical conclusion based on ballpark effects.

Both Tampa Bay’s and Miami’s parks lean towards pitchers while the heat and humidity in Arizona slants to a friendly hitting environment. Since Globe Life Park will debut with a retractable roof, it’s unknown how baseballs will travel in the new stadium.

Much will depend on how baseball proceeds with a plan to play. This could all be moot if the players union will not sacrifice time with their families in the three-hub or two state options to circumvent the spread of the coronavirus. However, players continue to push for a season to happen:

If only we had a place to go where there are ample baseball facilities and limited contact with others...Oh yeah we were just there. Food, grounds crew, clubhouse attendant, and broadcast group. That’s what it would take to make it happen.

Terry Francona, on the possibility of a neutral-site World Series: "If we were playing in a World Series, I'd go anywhere."

So, for now we wait with anticipation. Fantasy owners will try to take advantage of any competitive angle possible. How teams handle their pitching staffs, expanded rosters, prospects and a truncated season could create havoc. But it’s better than the alternative with no baseball in 2020. Until more news emerges regarding potential games, note baseball viewed on Twitter from Taiwan reached over a million hits already and the KBO in Korea projects to start their season on May fifth:

https://t.co/iq9bu0u0np Korea set its Opening Day for May 5. It plans a full 144-game season. But there is a HUGE caveat.

When information breaks about how to proceed, Fantasy Alarm will be ready. For example, Baseball America’s minor league ballpark effects can be applied to possible games not played in Minute Maid or Globe Life:

No idea if fantasy owners will need to know these facts, but it will factor in how to potentially value pitchers and hitters in a season of wide-ranging variables. Be on the lookout for players nearing returns from injuries with this delayed start to the season next week. Until then, stay safe Fantasy Alarm family and check out all the great work being done daily on the site.