Fantasy Baseball Daily Round Up: September 26 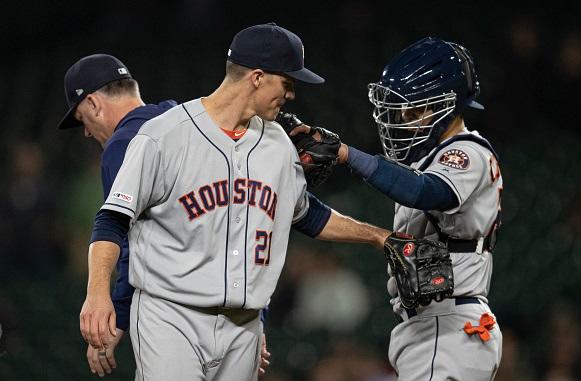 Almost seemingly under the radar, Zack Greinke carried a no-hitter into the ninth inning in Seattle last night. He lost it when Austin Nola singled with one out. Greinke seems to thrive pitching behind Gerrit Cole and Justin Verlander for Houston while notching his 18th win of the season tossing 8.1 scoreless innings yielding only two hits and a walk with nine strikeouts. Over 108 pitches, Greinke generated 20 swinging strikes and 18 called for a 35.2 called plus swinging strike (CSW) percentage, including this beauty:

Zack Greinke's 63.6 mph eephus curve to finish his 7th no-hit inning might be the finest pitch I've ever seen pic.twitter.com/sJByeCAIKH

Greinke’s durability aligns with another starter from Wednesday night along with two of his teammates:

This provides a segue to Jacob deGrom putting a bow on his quest for a second straight National League Cy Young Award. deGrom fired seven shutout innings giving up two hits and a walk with seven strikeouts. He produced 18 swinging strikes and 12 called for a 31.6 CSW percentage while becoming the first Mets starting pitcher to record at least seven innings in each of his last eight starts (Al Leiter in 1998). deGrom leads the National League in strikeouts (251) and WHIP (0.97) along with being second in ERA (2.43) and innings (204). Plus:

Here’s the other notable starting pitcher performances from last night:

Of course, after highlighting the breakout season by Hansel Robles earlier this week, he served up a two run go ahead home run to Matt Chapman on Wednesday night resulting in his first loss and fourth blown save of the year. Oakland countered with Liam Hendriks who recorded his 24th save during a clean inning with two strikeouts. Since taking over as the closer on June 21st, Hendriks leads the major with the 24 saves. He’s also recorded 71 strikeouts against four walks (two intentional) with a 1.76 ERA.

Hitter Highlights: Alonso within one of the rookie home run record

It’s been a year to remember for Pete Alonso and teammate Jeff McNeil . Alonso moved within one home run of tying Aaron Judge for the most by a rookie in major league history last night:

.@Pete_Alonso20's 51st HR puts him one away from tying the rookie HR record. pic.twitter.com/E24y7onNht

Alonso’s the sixth player in major league history with 50 or more home runs in his age-24 season or younger and his at-bats will be monitored this weekend to see if he can break the record. Jeff McNeil will miss the remainder of the season with a fractured wrist incurred when he was hit by a pitch in the sixth inning. McNeil finishes the year with a .318 average, 23 home runs and 75 RBI. Remember when these two were not ready to be promoted last September?

Rookie Randy Arozarena had himself an afternoon in a loss in Arizona. Arozarena went 2-for-4 with two runs, his first major league home run and stole two bases. Fueling the Diamondbacks win, Wilmer Flores racked up three hits including his ninth home run driving in four. Over his last 27 games, Flores owns a .393 average with six doubles, seven home runs and 22 RBI.

Ryan Braun launched a grand slam in the first inning in Cincinnati leading the Brewers to another win. Eric Thames added his 24th and Keston Hiura his 19th.

Blue Jays rookie Rowdy Tellez launched two home runs pushing his season total to 20 becoming the fourth player in team history to reach the mark in his first full season. He’s reached base in 15 of his last 28 plate appearances during the last seven games.

Getting Josh Donaldson back on track will benefit the Braves. Donaldson hit three doubles in his six at-bats last night driving in four. Ozzie Albies recorded his 187th hit moving into a tie with Ketel Marte for the National League lead. Marte’s done for the season.

With only the American League Wild Card still being fought for in regards to the postseason, Cleveland will send Aaron Civale to the mound in Chicago trailing the Rays by one and a half games. Oakland leads Tampa Bay by a half game and will send Sean Manaea to the bump versus the Mariners.

Milwaukee trails Washington by one game to host the play-in game with Chase Anderson slated to face Luis Castillo in Cincinnati. Washington will counter with Stephen Strasburg looking for his 18th win of the year facing the Phillies at home. Stay tuned.

T. Gonsolin - SP
LA1
Tony Gonsolin will start for the Dodgers on Tuesday in Game 6 of the World Series against the Rays.
It's not a surprise, but it's certainly worth noting. Gonsolin started Game 2 of the World Series on Wednesday, and he went just 1 1/3 before being pulled while allowing one run. The right-hander has made three appearances thus far in the postseason, but he has pitched just 7 2/3 frames in those appearances, and allowed eight runs. Because of limited availability -- and because the Dodgers have Walker Buehler lined up for Game 7 if necessary -- Los Angeles may ask him to go a little deeper, but it's far from a guarantee. Blake Snell has already been announced as the starter for Game 6 for Tampa Bay.
Added 12:21 am (EST)
Added 12:21 am (EST)

D. May - SP
LA
Dustin May fired 1 2/3 scoreless innings of relief in Game 5 of the World Series on Sunday against the Rays.
May came in for Clayton Kershaw with two outs in the sixth, and it was a friendly reminder -- to everyone but the Rays and their fans, of course -- of how electric is stuff is. The right-hander touched 101 with his fastball, and showed off the life that makes it a legitimate swing-and-miss pitch when he commands it. The 23-year-old threw 30 pitches on Sunday, so with a day off, there's a chance he's available for a possible closeout Game 6 on Tuesday.
Added Yesterday 11:46 pm (EST)
Added Yesterday 11:46 pm (EST)

T. Glasnow - SP
TB1
Tyler Glasnow went five innings and allowed four runs to take a loss on Sunday in Game 5 of the World Series against the Dodgers.
Glasnow struggled early; giving up a pair of run-scoring singles in the first to Corey Seager and Cody Bellinger. An inning later, he gave up a long solo homer to Joc Pederson, but the right-hander settled down nicely over the next two innings. The fifth was another story, however, as Max Muncy tanked a homer off the 27-year-old in his final frame. Glasnow’s command was better in this contest than he was in Game 1, but the early damage was enough for him to take the loss. He also threw 102 pitches, so there’s a very good chance that this was his last appearance of the 2020 season regardless of what happens in Game 6.
Added Yesterday 11:40 pm (EST)
Added Yesterday 11:40 pm (EST)

C. Kershaw - SP
LA1
Clayton Kershaw allowed two runs over 5 2/3 innings on Sunday to help the Dodgers to a 4-2 win in Game 5 of the World Series against the Rays.
He allowed five hits, and he walked two with six strikeouts. Kershaw had to battle to get his 17 outs, but ultimately, it was a successful start. He gave up both of his runs in the third, and things appeared to be coming off the rails in the fourth with runners on first and third with no outs. He was able to retire the next two hitters, however, and Kershaw showed off his savvy by coming off the mound and firing a strike home after stepping off when Manuel Margot attempted a straight steal of the plate. It wasn’t a dominant performance, but it wasn’t one of the future Hall of Famer's postseason klunkers, either. Kershaw will likely be available on a couple of days of rest in Game 7 -- if necessary -- on Wednesday. Tuesday will see Tony Gonsolin start against Blake Snell in Game 6.
Added Yesterday 11:38 pm (EST)
Added Yesterday 11:38 pm (EST)

Y. Díaz - 3B
TB1
Yandy Diaz went 2-for-3 with a triple and an RBI on Sunday in Game 5 of the World Series.
Diaz singled in the first, but the big hit was a triple in the third off Clayton Kershaw to score Kevin Kiermaier. He came around to score a play later on a Randy Arozarena single. Diaz hits leadoff against lefties, but with Tony Gonsolin likely starting Game 6 on Tuesday, there's a good chance that Diaz begins the contest on the bench.
Added Yesterday 11:38 pm (EST)
Added Yesterday 11:38 pm (EST)

J. Pederson - LF
LA
Joc Pederson homered and walked on Sunday in Game 5 of the World Series against the Rays.
Pederson blistered a solo shot off of Tyler Glasnow in the second inning to up the Dodgers' lead to 3-0. The outfielder also made a couple of nice plays in the field, and drew a walk for good measure. With Blake Snell starting Game 6 on Tuesday, there's a good chance Pederson is out of the lineup to start, but he will likely be used off the bench at some point.
Added Yesterday 11:38 pm (EST)
Added Yesterday 11:38 pm (EST)

M. Muncy - 1B
LA1
Max Muncy went 2-for-3 with a solo homer and a walk in a win over the Rays on Sunday in Game 5 of the World Series.
With the Dodgers leading 3-2, Muncy added some insurance with an absolute moonshot off of Tyler Glasnow in the fifth that extended that lead to 4-2. He also had a single that would have been a double if it wasn't hit so hard -- and if Muncy weren't a well below-average runner -- and drew a walk. The 30-year-old has been outstanding in these five games with a .389/.522/.611 slash, and he might be the favorite for World Series MVP if the Dodgers can win one more game.
Added Yesterday 11:38 pm (EST)
Added Yesterday 11:38 pm (EST)

B. Treinen - RP
LA1
Blake Treinen struck out two in a scoreless ninth to pick up a save on Sunday in Game 5 of the World Series.
The Dodgers turned to Treinen to pick up the save on Sunday after Kenley Jansen blew the chance on Saturday, and things didn't start out well as he allowed a base hit to Manuel Margot to lead off the inning. From that point on, the former Oakland closer was excellent; striking out two with a weak out sandwiched between. Treinen has elite stuff, and with the Dodgers just a win from a World Series title, it wouldn't be a surprise if they turned to him in a situation like this -- should it present itself -- in Game 6 on Tuesday.
Added Yesterday 11:38 pm (EST)
Added Yesterday 11:38 pm (EST)