Fantasy Baseball Daily Round Up: September 23 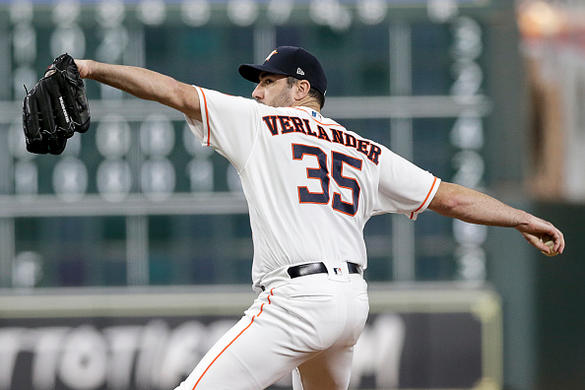 With home runs and youth being served in 2019, it’s easy to overlook veteran production. However, on Sunday Justin Verlander and Nelson Cruz reached milestones putting their teams in prime position for the postseason. Verlander reached 20 wins for the second time in his career in a labored outing spanning five innings giving up six hits, two earned runs and two walks with five strikeouts, but:

With his 20th win, @JustinVerlander becomes the oldest pitcher to reach the mark since R.A. Dickey in 2012, who won the Cy Young. pic.twitter.com/9j3Ab9MjXM

Verlander fell short of reaching 3,000 strikeouts for his career which will make him the 18th pitcher in history to surpass the mark. He gets one more start against these same Angels looking for at least six more strikeouts for 3,000 and 12 more for 300 again this season. On the year, Verlander owns a 2.53 ERA and 0.81 WHIP.

Nelson Cruz launched his 40th home run on Sunday during a 12-8 win over the Royals:

Nelson Cruz became the 57th member of the 400-home run club on Sunday.

It was particularly meaningful for the #MNTwins because of not only what Cruz has meant to them on the field, but also off it: https://t.co/N22FqfX0zV

He finished 2-for-3 scoring four runs, driving in one and walking twice. He’s also the third Twins player with 40 home runs in a season and the 26th player to record four seasons with at least 40 home runs in them. Miguel Sanó racked up his fifth multi-home run game this year raising his total to 33 with four RBI. He’s tied his career high in RBI.

Here’s the other notable hitting performances from Sunday:

George Springer had himself a day:

Helping the Astros win the American League West for the third straight year, Springer drove in four, has hit seven home runs his last eight contests and 11 over his last 16. Alex Bregman added his 39th home run and Yordan Alvarez went 4-for-4 with two doubles.

Fueling the Brewers offense, Eric Thames launched two home runs driving in three. Keston Hiura went 1-for-4 moving his hit streak to seven and he’s recorded at least a hit in 22 of his last 28 games with a .305 average, 22 runs, 10 doubles, seven home runs and 20 RBI.

Pacing the Dodgers offense, Cody Bellinger hit a grand slam. He’s hit 46 home runs this year but cratered a bit in the second half. Will Smith (14), Corey Seager (18) and Hyun-Jin Ryu (1) also homered.

Remember during FAAB-a-palooza when Oscar Mercardo did not garner huge bids? His owners do. Mercado hit his 14th home run driving in three putting the Indians into a tie for the last Wild Card spot with the Rays. Franmil Reyes hit his 36th home run as well.

With Domingo Germán out for the rest of the year, the return of Luis Severino could be the salvo for the Yankees postseason chances. Severino notched his first win since September 25th of last year firing five shutout innings scattering three hits with nine strikeouts. He only tossed 80 pitches generating 13 swinging strikes and 13 called for a 32.5 called plus swinging strikes (CSW) percentage. He’s yet to allow a run over his first nine innings off the injured reserve and could be fresh entering the playoffs.

Here’s the other notable starting pitcher outings from Sunday:

On a collision course to match-up in the play-in game for the National League, Washington and Milwaukee’s bullpens seem to be trending in opposite directions. Hunter Strickland and Wander Suero combined to give up four earned runs blowing a win for Austin Voth on Sunday. This bullpen also blew a win for Stephen Strasburg on Saturday. Fueling the Brewers ascension into a tie for the top Wild Card spot, Josh Hader recorded his 35th save working around a hit over 1.1 scoreless innings with three strikeouts.

Milwaukee’s won eight of its last nine games and 15 of its last 17. For a reference point, here’s the two teams bullpen results since the start of September:

Here’s the rest of the high leverage moments from Sunday:

A small slate features Patrick Corbin trying to put the Nationals back in line to host the play-in game facing the Phillies.

Blake Snell will try to increase his innings at home versus the Red Sox trying to move back in front of Cleveland for the last playoff spot in the American League.

Adam Wainwright brings his recent run of magic to Arizona trying to inch the Cardinals closer to clinching the National League Central.

Y. Hirano - RP
SEA1
Yoshihisa Hirano (COVID-19) has joined the Mariners' alternate training site.
Despite only recently joining the team site, Hirano has been throwing at the team's facility in Peoria, Arizona for weeks. That news means it shouldn't be long before the 38-year-old is ready to rejoin the big club. Mariners manager Scott Servais said Hirano “could be back with us here pretty soon,” further confirming it shouldn't be long before the right-hander is back to pitching in the back end of the M's bullpen.
Added 12:45 pm (EST)
Added 12:45 pm (EST)

S. Strasburg - SP
WSH1
Stephen Strasburg will be placed on the injured list for his ailing right hand, according to MLB Network's Jon Heyman.
Strasburg has been on the team's active roster for the entire season but he's made just two starts, the most recent lasting just two-thirds of an inning Friday. A nerve issue in his right hand is the culprit, and the fact that he's now going on the injured list is a troubling new development in what's become a full-blown saga. Nationals manager Dave Martinez should have more light to shed on the situation later Saturday.
Added 12:38 pm (EST)
Added 12:38 pm (EST)

M. Rojas - SS
MIA
Craig Mish of SportsGrid reports Miguel Rojas (COVID-19) has been approved for reinstatement by baseball's joint committee.
Rojas and 14 other players were placed on the injured list by the Marlins in the wake of their COVID-19 outbreak, but things seem to be trending in the right direction. The shortstop will report to the team's alternate training site to begin baseball activities, and once he's back in the swing of things he'll return to the Marlins. The COVID-mandated break was an unfortunate development for Rojas, who had seven hits in his first 10 at-bats out of the gate.
Added 12:35 pm (EST)
Added 12:35 pm (EST)

S. Alcantara - SP
MIA
Sandy Alcantara (COVID-19) has been approved for reinstatement by baseball's joint committee, Craig Mish of SportsGrid reports.
Teammate Miguel Rojas has also been cleared for reinstatement, per Mish. With approval from MLB, the players will now report to the Marlins' alternate training site to begin to ramp back up. It remains to be seen what kind of stamina Alcantara, who hasn't pitched in a game since July 24, will have retained over his shutdown. Marlins manager Don Mattingly will hopefully be able to provide a clearer picture of the 24-year-old's timeline in the coming days.
Added 12:29 pm (EST)
Added 12:29 pm (EST)

K. Akin - SP
BAL
Orioles optioned LHP Keegan Akin to their alternate training site.
The 25-year-old got into one game for the O's, allowing three runs in three innings of work. A second-round pick in 2016, Akin should see the majors again at some point soon.
Added 12:27 pm (EST)
Added 12:27 pm (EST)

L. Thomas - CF
STL
Cardinals placed OF Lane Thomas on the COVID-19 injured list.
Thomas, Austin Dean, Ryan Helsley and, as a precaution, Austin Gomber were placed on the injured list Saturday for COVID-related reasons. The 24-year-old had gotten into four of the team's first five games but was hitless in three at-bats before the shutdown.
Added 12:24 pm (EST)
Added 12:24 pm (EST)

R. Helsley - RP
STL1
Cardinals placed RHP Ryan Helsley on the COVID-19 injured list.
Helsley was among the Cardinals players to test positive for COVID-19 after the team's recent outbreak. There was a thought he might be the team's closer early in the season, but this development obviously scuttles that. It remains to be seen who will close games for the Cards as they come out of the COVID break.
Added 12:21 pm (EST)
Added 12:21 pm (EST)

O. Narváez - C
MIL
Omar Narvaez is catching and batting leadoff Saturday against the Cubs.
Narvaez will hit leadoff for the first time in his career as Brewers manager Craig Counsell continues to search for the right lineup combination. The 28-year-old hasn't exactly forced his way into the top spot, hitting just .158/.304/.184 in 14 games this year. Perhaps Counsell is hoping the leadoff spot will provide a jolt for Narvaez. The backstop will be the 10th different player the Brewers have batted atop the lineup thus far this season.
Added 12:15 pm (EST)
Added 12:15 pm (EST)