Fantasy Baseball Daily Round Up: September 19 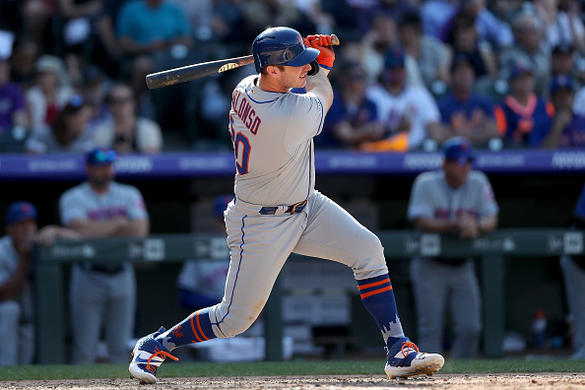 Suddenly with a pulse again in the Wild Card chase, the Mets prevailed in Colorado with their talented rookie moving his way up the record lists:

Most home runs by a rookie, MLB history:

Remember last year when Pete Alonso was not ready for a promotion after obliterating baseballs across two levels of the minors in 2018? Alonso’s the first player to hit more than 40 home runs in his debut season and sits on the precipice of becoming the first to launch 50 or more in one. With two more RBI yesterday, Alonso also ranks third all-time with 113 in National League history in a rookie season.

Using the tweet above as a segue, Aaron Judge hit his 24th home run in a loss last night but hit 12 over his last 25 heating up before the playoffs.

For those searching for speed on the waiver wire, it’s time to kick the tires on Garrett Hampson . He went 1-for-4 with a run and two stolen bases on Wednesday. He’s also hitting .444 his last seven contests with a home run and three steals.

Just when it seemed like Randal Grichuk ’s hit streak would end, he crushed a grand slam during a six run rally in Baltimore:

Randal Grichuk is the 3rd AL player in the last 40 years to hit a grand slam on the road with his team down by 3 with 2 outs in the 9th.

All 3 of those were by the @BlueJays:

He’s the first Blue Jay since Justin Smoak and Josh Donaldson in 2017 to record at least 30 home runs and 75 RBI in a season. For the Orioles, Trey Mancini went 2-for-5 with a double and three RBI. He also scored his 100th run of the season, notched his fifth multi-hit effort in his last six games and hit safely in 18 of his last 20 contests. Jonathan Villar went 3-for-6 scoring three runs, hit his 23rd home run and swiped his 36th base. He’s in the midst of a six game hit streak, finished with his 50th multi-hit game. During 63 games in the second half, Villar’s slashing .307/.371/.528 with 13 home runs, 50 runs and 32 RBI.

Continuing to surge, Kyle Lewis hit his fifth home run in seven career games with Seattle in a win over the Pirates on the road. Tom Murphy added his 18th home run driving in two and walked twice. Since the All-Star break, Murphy owns a .298/.356/.589 slash with nine home runs and 21 RBI. Perhaps he did not need Coors to breakout?

Death, taxes and Bryce Harper versus Julio Teheran . Harper hit his 32nd home run of 2019 last night and owns a .404 average (19-for-47) with nine home runs against Teheran.

Although the White Sox remain on the periphery of fantasy attention, Yoán Moncada registered his 11th multi-hit game over his last 14 hitting two doubles in four at-bats on Wednesday. He’s reached safely in 16 straight contests with a .462 average, nine doubles, nine RBI and a robust 1.184 on-base plus slugging percentage in the streak. Eloy Jiménez extended his hit streak to 10 games during which he’s batting .405 with three doubles, four home runs and 13 RBI.

If Eugenio Suárez hits 50 homers this year, he will have seasonal ascent for homers never seen in MLB history: 4, 13, 21, 26, 34, 50? Six seasons only, increase total every year, starting in single digits, finishing with 50, confirmed by @EliasSports. #quirkjians

Yuli Gurriel launched his 30th home run in a win over the Rangers marking the first time since 2000 the Astros have at least three players on the roster with 30 or more home runs. Jose Altuve hit his 29th last night and could set another home run record this year with one more.

It’s been a second half marked by regression for Cody Bellinger but:

The @Dodgers' Cody Bellinger hit his 45th HR of the year tonight.

Last, but not least, Tommy Pham racked up five hits scoring three runs with two doubles, two RBI and his 32nd stolen base in a win over the Dodgers. Austin Meadows added his 32nd home run.

It seems like the Round Up rotation for myself seems to accompany every Gerrit Cole start. For one night, his terrific outing did not take the lead. Dinelson Lamet recorded a career high 14 strikeouts during his third win of the season in Milwaukee. Lamet allowed three hits, one earned run and three walks in six innings. He tossed 98 pitches generating 19 swinging strikes and 21 called for a 40.8 called plus swinging strikes (CSW) percentage. Here’s a sampling of his start:

It’s never too early to start thinking about 2020 drafts, so keep Lamet in mind once the rounds hit double digits. As for Cole, he fired eight innings giving up six hits, two earned runs and a walk with 10 strikeouts. Plus:

.@astros ace @GerritCole45 is the 1st AL RHP with 300 strikeouts in a season since @45PedroMartinez in 1999. pic.twitter.com/4NeJfH8ioj

Cole’s recorded at least 10 strikeouts in seven straight outings and 19 this year joining Nolan Ryan, Randy Johnson, Sandy Koufax and Pedro Martinez in doing so. During his start, Cole produced 18 swinging strikes and 19 called for a 36.6 CSW percentage. He’s also won each of his last 14 decisions.

Due to the Angels lack of wins this season, it keeps Hansel Robles off the radar. Robles notched his 22nd save giving up a hit with two strikeouts in New York. Since June first, he leads all American League pitchers with at least 30 innings with a 1.25 ERA. He also retired 27 consecutive hitters during this stretch and in September owns a 11:1 K:BB yielding zero earned runs and a minuscule 0.24 WHIP. Remember, the Mets gave up on him and paid a steep price to acquire Edwin Díaz .

During the day slate, Aaron Nola faces off with Mike Soroka in Atlanta while Jordan Lyles tries to get the Brewers back on track at home versus the Padres.

St. Louis lands in Chicago armed with a three game lead and Jack Flaherty on the bump. Kyle Hendricks will oppose him starting a pivotal four-game series with playoff implications. Cleveland tries to remain the American League Wild Card hunt with Mike Clevinger pitching versus Detroit looking for his 10th win in the second half.