Fantasy Baseball Daily Round Up: September 12 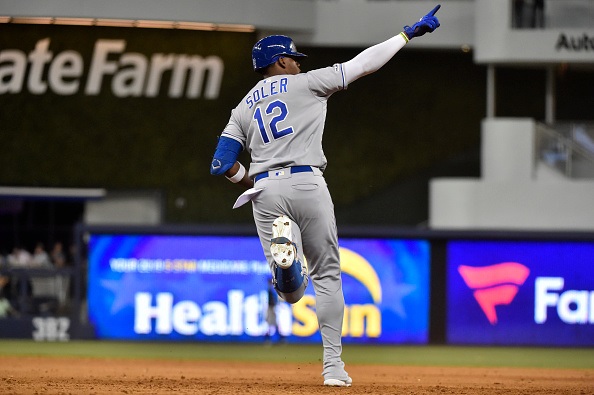 It finally happened, home runs dominated fantasy coverage this year and a Jonathan Villar blast set the major league record in total home runs during a season at 6,106 last night. Of course, the onslaught did not stop with Villar’s home run and the total can be raised over the last 18 games of the year.

As the divisional winners seem to crystallize, the Wild Card races in both the American League and National League continue to percolate. Milwaukee won its sixth straight contest pushing into a tie for the second Wild Card spot with the Cubs. A Nationals win in Minnesota keeps them in line to host the play-in game ahead by three and a half games. Here’s the Fangraphs playoff odds chart for the National League:

Not shown in the graph, Washington owns a 97 percent chance of qualifying for postseason with the Cubs next at 49.9 percent, Milwaukee (33 percent), the Mets (19.9 percent), Arizona (5.3 percent) and the Phillies (3.6 percent). Hang on tight.

In the American League, it seems down to a three team race for two playoff spots between Oakland, Tampa Bay and Cleveland:

Within the chart, along with the ups and downs over the last 30 days, Oakland owns the highest chance entering game play on Thursday at 75.5 percent, the Rays at 69.3 percent and Cleveland just under 50 percent (47.3). Add in some of the injury issues the Indians will need to overcome but all three teams remain separated by only a half-game.

Getting Atlanta back on track in Philadelphia, Dallas Keuchel won his fifth straight decision giving up three hits, one earned run and three walks with eight strikeouts. Over his last 37 innings, Keuchel owns a 0.97 ERA with 35 strikeouts. Last night, he generated 10 swinging strikes and 18 called for a 28.9 called plus swinging strike (CSW) percentage.

Here’s the other notable starting pitching performances from Wednesday night:

Soler’s up to 43 this season with 20 in 191 at-bats since the All-Star break. Adalberto Mondesi went 3-for-5 with three runs, two RBI and two stolen bases. Despite missing time with a left shoulder injury, Mondesi’s within two steals of the major league lead.

Sparking the Braves offense in Philadelphia, Tyler Flowers hit his 11th home run driving in all three runs. For those starved at the catcher position, Flowers owns a .333/.489/.636 slash his last 13 games with 12 RBI in them.

It feels like the A’s offensive contributors not named Khris Davis fly below the fantasy radar. Marcus Semien went 3-for-5 last night including his 28th home run. He’s scored 109 runs this year and hitting .337 his last 24 games with 22 runs, eight doubles, nine home runs and 25 RBI. Sean Murphy added his fourth home run in just 18 at-bats this season. So far, the rookie’s on-base plus slugging percentage sits at 1.368 since his promotion.

In his 1st career game, the @Mariners' Kyle Lewis hit a game-tying HR in the 5th inning, and in his 2nd game he hit a go-ahead HR in the 7th.

He's the 1st player in MLB history to hit a game-tying or go-ahead HR in the 5th or later in each of his 1st 2 games.#TrueToTheBlue

Following up his ninth inning heroics from Tuesday, Manuel Margot notched a smash and dash hitting his 12th home run while stealing his 20th base last night. Wil Myers extended his hit streak to 11 games, drove in two runs and stole his 15th base. During his streak, Myers owns a .471/.486/.794 slash with five runs, two doubles, three home runs, 10 RBI and three steals his last 37 plate appearances. He also heads to Coors for the weekend where he possesses a career .355 average with a 1.050 on-base plus slugging percentage in 158 plate appearances.

With less than three weeks remaining, fantasy owners of Brad Hand will need to heed the news surrounding the Indians closer. Battling arm fatigue, Hand underwent an MRI which provided good news, but he returned to Cleveland for further testing with the team’s doctors. Last night in Los Angeles, Terry Francona deployed three relievers for the save with Adam Cimber recording the last out for his first of the season. Nick Wittgren , Oliver Pérez and even Tyler Clippard could be a factor for saves with Cleveland going forward. Stay tuned.

Injury updates on Brad Hand . Plus, Mike Trout will return to action on Friday while Joey Gallo remains on track for activation on September 20th.

During the day slate, Lucas Giolito looks for his 15th win. Matt Boyd will take on the Yankees at home and Caleb Smith tries to snap the Brewers win streak.

Justin Verlander takes the mound versus Oakland in the evening games and Rich Hill will try to build up his pitch count for the postseason starting in Baltimore.