Fantasy Baseball Daily Round Up: August 31 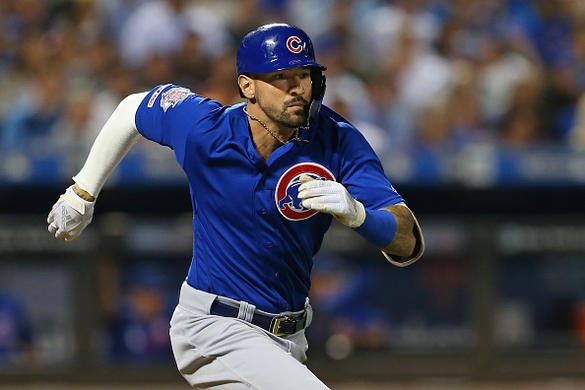 One day from the rosters expanding and the stretch run in September, things continue to evolve in pennant races. Focusing on the National League Central, Chicago defeated Milwaukee moving within one of St. Louis for the division and putting the Brewers six games back with 28 games remaining. Here’s a look at the playoff odds for each team courtesy of Fangraphs:

Nicholas Castellanos continues to rake during his tenure with the Cubs blasting two more home runs on Friday:

Castellanos went 2-for-4 driving in four. He’s set the Cubs record for most home runs in a month since joining the team with 11 and could tie Justin Upton ’s mark of 12 with Atlanta in April of 2013 in home runs in their first month with a new franchise. Stay tuned. Milwaukee will promote Jimmy Nelson , Brent Suter and Travis Shaw on Sunday, but doubt it will be enough to propel them back to the playoffs.

Shifting to the National League East, Anthony Rendon continues to keep his name in the Most Valuable Player conversation:

Racking up three more hits on Friday, Rendon took over the National League lead in average (.333) moving ahead of Christian Yelich . Rendon also sits two RBI behind the major league lead in the category with 107 this year.

Trying to keep the Mets dimming playoff hopes alive, Todd Frazier launched two home runs driving in six in a wild finish in Philadelphia. Michael Conforto added his 28th home run among his three hits.  Zack Wheeler and Aaron Nola each yielded one earned run but the two bullpens combined to give up 14 earned runs after they left the contest.

Oakland keeps taking the Yankees behind the woodshed winning 8-2 in the Bronx. The A’s have won all four match-ups so far this year, own a 11-3 record versus New York since 2017 in the regular season and won seven series openers versus the Yankees. Mark Canha hit a triple and owns a .355 average in August with six home runs and 18 RBI. Jurickson Profar went 2-for-5 with a double and his 18th home run. He’s homered in back-to-back contests.

Meanwhile in Kansas City, just another five-hit game for Baltimore:

The @Orioles' Renato Núñez , Anthony Santander & Hanser Alberto have all had their 1st career 5-hit game this month.

Jonathan Villar added two hits, scored three runs and stole three bases in the win. Villar’s the third Oriole with at least 20 home runs and 30 stolen bases in team history since 1954. Pedro Severino went 4-for-6 with two runs, three RBI and a steal. Anthony Santander hit his 14th home run and has an RBI in four straight games.

Welcome to the record books Jorge Soler . He hit his franchise record tying 38th home run in a blowout loss. Soler’s recorded 10 home runs his last 26 games and pacing towards 45 this year.

Rockies shortstop Trevor Story hit the first lead-off home run of his career, and 29th homer this year in a loss at home. However, Story owns a 15-game home hit streak with 14 runs, four doubles, six home runs, 11 RBI, eight walks, two stolen bases and a .474 average in it.

Have a season Eduardo Escobar . He went 3-for-4 last night including his 31st home run and 10 of his last 14 hits resulted in extra-bases (five doubles, one triple, four home runs). Over his last 24 games, Escobar’s hit nine home runs driving in 27.

Trying to keep his team’s playoff hopes afloat, Madison Bumgarner battled on the mound and during his at-bats in a win over the Padres Friday night. Bumganer fired seven innings giving up four hits, one earned run and two walks with nine strikeouts. This marks his 60th career win at Oracle Park tying a team record held by Matt Cain. San Francisco’s also won 11 of Bumgarner’s last 13 starts. In this stretch, Bumgarner’s worked 80 innings with an 84:15 K:BB, 2.81 ERA and 0.91 WHIP. Last night, Bumgarner generated 16 swinging strikes and 18 called for a 33 called plus swinging strike (CSW) percentage.

Arizona took the lead on a balk by Yimi Garcia and Archie Bradley finished it working the last 1.2 innings giving up a hit and striking out three. Since taking over as the closer, Bradley’s notched each of the Diamondbacks last nine saves. He’s also turned in scoreless appearances in 20 of his last 23 contests since June 26th with a 1.38 ERA over 26 innings.

Here’s the other high leverage events from Friday:

Fantasy owners will await word on how serious Keston Hiura ’s hamstring injury will be. He left yesterday’s game after running to first base and pulling up.

With Oakland hot, how will they structure their rotation with Sean Manaea throwing well in his rehab and this rookie knocking on the door?

Suddenly, Oakland could be a dangerous match-up in the playoffs. They face the Yankees this afternoon with Homer Bailey opposed by Domingo Germán .

Cincinnati and St. Louis will play a split doubleheader while Clayton Kershaw will duel Robbie Ray out in the desert.

Be sure to stay ahead of the competition across all fantasy formats on Fantasy Alarm.