Fantasy Baseball Daily Round Up: June 19 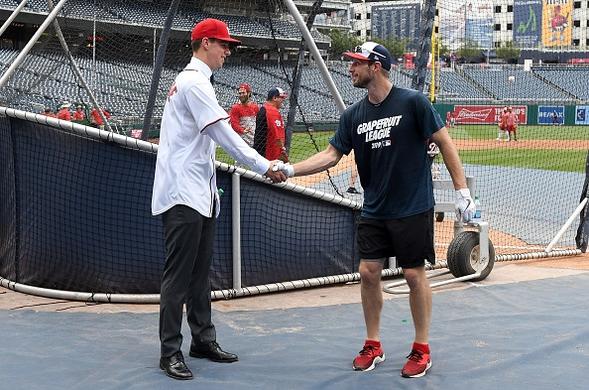 When the news on Twitter surfaced suggesting a Max Scherzer injury as a result of a bunting drill, it seemed innocuous at first. However, once the video surfaced, along with the diagnosis of a broken nose, it now seems to encapsulate how this fantasy baseball season feels:

Max Scherzer broke his nose after taking a ball off the face during a bunting drill. pic.twitter.com/M9o4hYBj0J

Without delving into the potential ramifications of going through the motions during a drill, the Nationals may need to shuffle their pitching following two straight games postponed due to rain. This afternoon, they can use either Erick Fedde in the second game or Austin Voth as reported by beat writer Dan Kolko. Also, with Stephen Strasburg slated for Thursday, it could be Fedde if he does not pitch in the doubleheader and Aníbal Sánchez slotting in the next two games with Scherzer getting extra rest until Sunday. Less than optimal for Scherzer owners, but with no other fractures around his face, they do catch a break, no pun intended. *Editor's note: Reports do suggest that Scherzer will make his start today.

As for the pitcher’s actually in action on Tuesday night, Jacob deGrom led the way going 8.1 innings in Atlanta giving up five hits, two earned runs and striking out 10. deGrom generated 16 swinging strikes and 17 called ones of his 113 pitches for a 29.2 CSW (Called plus swinging strikes) percentage. He also moved into seventh on the all-time Mets strikeout list with 1,112 in his career.

Cole Hamels did not factor in the decision, but worked seven innings allowing six hits, one earned run and two walks with eight strikeouts. His 31.7 CSW percentage led the way last night with 14 swinging strikes and 19 called of his 104 pitches. Plus, some history for Hamels:

Speaking of history, two rookies made some noise last night starting with seven more shutout innings by Jordan Yamamoto against the Cardinals:

Hard to imagine a better start to your career. pic.twitter.com/xnLW8qbeok

Kudos to Logan Allen as well who won his first career start, recorded his first major league hit and scored a run. He also fired seven shutout innings yielding three hits and two walks with five strikeouts along with a cool CSW percentage of 30 with 10 swinging strikes of his 90 pitches. Plus, Allen wins a bet with John Cena:

Here’s the rest of the pitching highlights from Tuesday night:

Making a liar out of me, Aroldis Chapman continues to surge this year. He locked down his 19th save striking out the side and hit 101.6 MPH on the radar for his fastest pitch this year. Hansel Robles notched his 11th save with a clean ninth and a strikeout in Toronto, plus seems to be messing with hitters with a hitch at times in his delivery:

Hansel Robles was messing with Vladimir Guerrero Jr.’s timing with perhaps the longest delivery ever for a 100 mph fastball.

It’s too early to call it a committee, but Michael Lorenzen racked up his second save in as many nights in a clean ninth inning versus the Astros. Raisel Iglesias pitched in the eighth inning for the second straight game for his third save striking out both hitters he faced. This could be sheltering Iglesias from left-handed hitters, so keep tabs on how this evolves. Yes, Iglesias did face Yusiel Gurriel with the game in the balance but he’s openly complained about not being used as a traditional closer as well this season. Stay tuned but those desperate for saves can add Lorenzen with hopes this trend continues.

When one thinks of Whit Merrifield , it’s usually associated with his ability to hit for a high average with stolen base upside. But, he launched two home runs driving in six during a Royals rout over the Mariners:

Merrifield’s in the midst of an eight game hit streak, hitting .306/.353/.510 while pacing towards 115 runs, 22 home runs (insert eye emoji), 87 RBI and 24 stolen bases. Jorge Soler added his 20th home run in this contest. He’s homered in back-to-back games and in three of his last four. Adalberto Mondesi did swipe his 27th base, but left with groin tightness. He’s considered day-to-day like most of us.

After a team meeting for the Mets, Pete Alonso went 4-for-4 with three runs, two doubles, hit his 24th home run, drove in three and walked twice. He’s recorded 24 extra-base hits this year with an exit velocity of at least 108 MPH, credit to Sarah Langs for the research on this nugget. Alonso’s nearing the team record for home runs by a rookie set by Darryl Strawberry who hit 26 in 1983 and on pace for 53 with 124 RBI.

Stay hot Charlie Blackmon who racked up three more hits last night. Blackmon’s reached base in 28 straight contests with a .402/.445/.856 slash line in the streak. He’s the first Colorado player with at least three hits in five straight games, the 12th in major league history and first since Jose Altuve did it in 2017. Nolan Arenado added his 18th home run among his three hits and drove in three.

Both Jesse Winker (12) and Derek Dietrich (18) homered in the first inning versus Justin Verlander leading to a Reds win. Winker’s homered in two of his last three games. As for Dietrich, he owns 38 hits this year, 18 of them homers for a ridiculous 47.3 percent of his outcomes.

Perhaps revenge is a dish best served with a win on a broken bat home run?

Eloy Jiménez hit his first home run in Wrigley Field for a game winner versus his old franchise. He’s also hitting .379 over his last eight games with five home runs and 11 RBI.

Although Max Kepler did not start last night, he tied the game twice with RBI then provided the game winner in the 17th inning of a marathon in Minnesota:

Kepler went 3-for-5 with his 18th home run and three RBI. On the opposite end of the spectrum, J.D. Martinez went 0-for-8 with five strikeouts. He had not struck out four times in a game since 2015 and has done so twice in the span of a week. 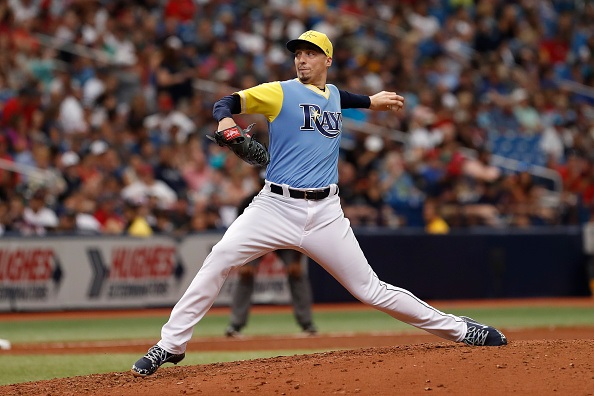 Well, it appears the Phillies and Nationals will actually play games on Wednesday, so enjoy. Also note who pitches as Washington will reset its rotation with the Scherzer injury.

Can Blake Snell rebound with a strong outing in the Bronx? He’s opposed by C.C. Sabathia still in pursuit of his 250 wins.

Trevor Williams will return from the injured list to face the Tigers at home.

Lucas Giolito will try to win his 10th straight decision against the Cubs on the road. He will be opposed by Jon Lester .

Be sure to stay ahead of the competition by consuming all the great work daily on Fantasy Alarm.

P. Báez - RP
LA
Dodgers manager Dave Roberts said Sunday that he expects Pedro Baez to arrive at summer camp "soon."
The Dodgers have not offered an explanation for Baez's absence, and the clock is ticking with Opening Day less than two weeks away. Baez registered a 3.10 ERA, 0.947 WHIP, and 69/23 K/BB ratio over 69 1/2 innings in 2019 and is positioned as the top setup option in the Los Angeles bullpen leading into the 2020 campaign.
Added 6:19 pm (EST)
Added 6:19 pm (EST)

K. Jansen - RP
LA
Kenley Jansen finally arrived at Dodgers summer camp on Sunday.
Jansen missed the first eight days of workouts and confirmed in a Zoom call with reporters on Sunday afternoon that he tested positive at one point for COVID-19. He presumably kept up with his throwing work while in quarantine and should be relatively close to full strength leading into the delayed start to the 2020 season. The 32-year-old right-hander is going as the fifth reliever off the board in the average Yahoo draft after posting a 3.71 ERA, 1.06 WHIP, and 80/16 K/BB ratio over 63 innings in 2019 while tallying 33 saves.
Added 5:25 pm (EST)
Added 5:25 pm (EST)

C. McHugh - SP
BOS
Red Sox manager Ron Roenicke announced Sunday that Collin McHugh (elbow) remains in rehab mode.
McHugh could have been a worthy candidate to fill the starting rotation vacancy left by Eduardo Rodriguez's unfortunate COVID-19 diagnosis, but the 33-year-old right-hander has not yet advanced to facing live hitters and would appear ticketed for the 10-day injured list to open MLB's planned 60-game campaign. When he is ready to go, it will likely be in a long relief role in the Boston bullpen. McHugh battled a right elbow issue last season in Houston and it carried over with him into Red Sox camp this spring.
Added 4:57 pm (EST)
Added 4:57 pm (EST)

A. Judge - RF
NYY
Yankees manager Aaron Boone said he's hopeful that Aaron Judge (neck) will be able to return to intrasquad game action on Tuesday.
Judge did not participate in summer camp workouts on Saturday or Sunday after coming down with some stiffness in his neck. It's a minor issue, and it has nothing to do with the stress fracture in his rib cage that caused him to miss all of spring training. The 28-year-old slugger should be ready for the Yankees' Opening Night game on July 23 against the Nationals if he is able to avoid further physical setbacks.
Added 4:51 pm (EST)
Added 4:51 pm (EST)

A. Rizzo - 1B
CHI
Anthony Rizzo (back) took swings in live batting practice on Sunday.
He also played catch and did some light infield work on Saturday. Rizzo has been held out of intrasquad games due to discomfort in his back, but it's looking like the veteran first baseman should be ready for Opening Day on July 24. He is currently going as the fifth 1B-eligible player off the board in the average Yahoo league after slashing .293/.405/.520 with 27 home runs and 95 RBI over 146 games in 2019.
Added 4:29 pm (EST)
Added 4:29 pm (EST)

F. Lindor - SS
CLE
Indians manager Terry Francona suggested Sunday that Francisco Lindor might bat third this season.
“That’s my sneaking suspicion," said the Cleveland skipper. Lindor has mostly hit leadoff for the Tribe over the last few years, and he's had great success in that role, but his power may be better showcased a little lower down the lineup. Offseason addition Cesar Hernandez is a candidate to take over leadoff duties.
Added 4:23 pm (EST)
Added 4:23 pm (EST)

G. Cole - SP
NYY
Gerrit Cole struck out nine batters over 5 2/3 scoreless innings in an intrasquad game Sunday at Yankee Stadium.
Cole scattered four hits and one walk across the 84-pitch outing. The 29-year-old right-hander should be stretched out to around 100 pitches by the time he takes the mound on Opening Night against the Nationals. He scored a nine-year, $324 million contract from the Yankees this winter after registering a brilliant 2.50 ERA, 0.895 WHIP, and 326/48 K/BB ratio in 212 1/3 innings (33 starts) last year with the Astros.
Added 3:44 pm (EST)
Added 3:44 pm (EST)