Fantasy Baseball Daily Round Up: June 15 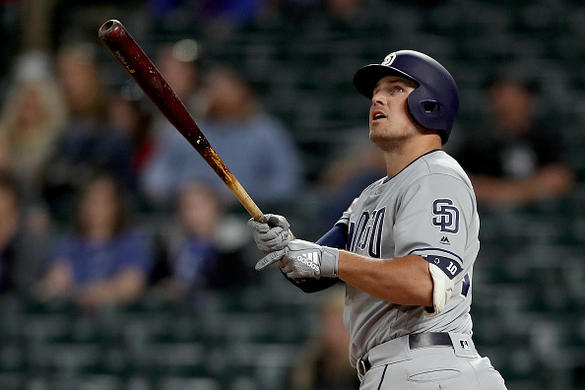 Amidst a wild night of games with 55 home runs launched, it makes sense the wildest one occurred in Coors Field. Underscoring why bullpens matter, the Rockies and Padres made some history with a record setting come from behind win by San Diego:

Also from Elias, #Rockies seven-run lead after the seventh inning is the largest blown lead in any game, win or lose, since June 15, 2017 vs. San Francisco. The Rockies have never blown a lead of eight or more runs.

Mike Dunn started the ninth inning with a six run cushion then left with his team only ahead by two runs. He also contributed to the Hunter Renfroe three-home run party serving up Renfroe’s second of the night:

Which culminated in Renfroe’s blast in the 12th, putting the Padres ahead for good. Hidden beneath the loss, Wade Davis suffered his first blown save of the season. Since returning from the injured list, he’s logged 3.2 innings in four outings giving up seven hits, three earned runs and one walk with three strikeouts for a 7.36 ERA along with a 2.18 WHIP. Less than optimal.

As for Renfroe, over his last 162 games he’s hit 44 home runs and has 21 this year. He finished last night with four hits and five RBI. Manny Machado added four hits of his own with his 13th home run driving in two. Fernando Tatis Jr. racked up two hits in the ninth inning and continues to be a spark to this offense. For the Rockies, Charlie Blackmon tallied four hits in seven at-bats with three runs, a double and his 15th home run. This marks back-to-back games with four hits for Blackmon. He’s hit safely in six of seven games off the injured list with 10 runs, five home runs, 11 RBI and a .469 average (15-for-32) in them.

A double dong game for J.D. Martinez in Baltimore. He drove in three along with drawing two walks. Martinez has three multi-home run games this year and of his 13 career games with them, five took place against the Orioles. Jackie Bradley Jr. extended his hit streak to five games with his seventh home run.

Grand slams also were in play with Rougned Odor and Robinson Chirinos launching them last night. Odor went 1-for-2 with his eighth home run driving in four and walked three times. Over his last seven games, Odor owns a .991 on-base plus slugging percentage and could be heating up. Chirinos knocked in six runs and has hit 10 of his 12 home runs versus right-handed pitching this season with a .292 isolated power. And a different rookie also showed off his power:

Yordan has some STUPID power. ???? pic.twitter.com/SwB8UYRnUR

Yordan Alvarez homered for the third time in only four games since his promotion plus hit two singles with exit velocities over 110 MPH.

Just when it seemed safe to ignore Jake Bauers, he recorded the second cycle in two days (Shohei Ohtani on Thursday):

Jake Bauers needed a homer for the cycle …

Bauers finished with four hits and four RBI with the ninth cycle in Cleveland history and first since Rajai Davis in 2016.

Paul DeJong homered in both the suspended game from Thursday and last night’s game against the Mets leading the Cardinals to wins in each contest.

Stay hot Scott Kingery. Kingery racked up three hits, including his eighth home run. Over his last 30 games, Kingery’s scored 19 runs with eight home runs, 19 RBI, two stolen bases and a .327/.357/.673 slash line. In this same game, Freddie Freeman launched his 19th home run and currently pacing towards 44 this year with a 1.000 on-base plus slugging percentage.

Shrouded by Josh Bell’s breakout, Colin Moran continues to produce. He drove in a career high five runs and hit his 10th home run. Moran’s pacing towards 23 home runs and 94 RBI, in only 444 at-bats.

Rolling to the 87th career double digit strikeout game of his career, Max Scherzer evened his record with his fifth win striking out 10 Diamondbacks over seven innings.

This is Max Scherzer's 87th career game of 10+ strikeouts.

Scherzer also passed Warren Spahn and Bob Feller on the all-time strikeouts list in this outing with 2,584 in his career. Limiting Arizona to three hits, both earned runs occurred on solo home runs while Scherzer yielded one walk. He generated 23 swinging strikes and 19 called of his 104 pitches for a robust 40.4 called plus swinging strike (CSW) percentage.

Owning Kyle Gibson can be frustrating, but he fired eight shutout innings giving up two hits while striking out six en route to his seventh win. He only needed 87 pitches with 11 swinging strikes and 17 called for a 32.2 CSW percentage in a nice bounceback game.

Not only did Wade Davis blow a save as highlighted above, Hector Neris suffered his first blown save melting down in Atlanta. Neris allowed a lead-off single to Dansby Swanson but struck out Freddie Freeman and induced a ground out by Josh Donaldson. However, a walk to Nick Markakis prolonged the inning leading to a double by Austin Riley and the game winning single by Brian McCann driving in two runs.

Edwin Diaz started the suspended game on the mound. Diaz blew his third save in the rain on Thursday night then took the loss coughing up a home run to DeJong in the ensuing inning. He finishes this game with four hits, three earned runs and a walk. The five home runs yielded by Diaz through 27.2 innings this year matches his total from last season.

Here’s the rest of the high leverage moments from Friday:

What to watch for…

With a split slate of games, injury news will need to be monitored. Both Vladimir Guerrero Jr. and Byron Buxton left their games early last night after being hit by a pitch. While X-rays proved to be negative, monitor each situation closely.

Both Giancarlo Stanton and Aaron Judge played at Triple-A last night during rehab outings. With the Yankees reeling, they could provide a spark in the days ahead if healthy.

Charlie Morton will try to win his ninth game facing the Angels this afternoon. Speaking of the Angels, more help could be on the way for their offense:

Rehabbing #Angels OF Justin Upton is 4-for-5 with two jacks, four RBIs, a walk and five runs score for Inland Empire. https://t.co/Vm6wWyZSB8

Another Giant potentially on the trade block, Madison Bumgarner will try to improve his stock at home versus the Brewers.

In the night slate, Jake Odorizzi will look to tie Giolito with his 10th win and gets to face a reeling Royals lineup. Sean Newcomb tries to cement a spot in the ever evolving Braves rotation facing Aaron Nola. Plus, Frankie Montas and Walker Buehler also toe the rubber trying to stay hot.

Be sure to stay with Fantasy Alarm for all the latest updates across all platforms to stay ahead of the competition.