Fantasy Baseball Daily Round Up: May 27 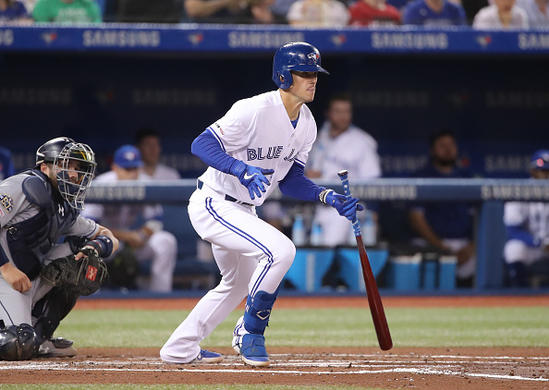 First, a moment of reflection and to remember those who sacrificed to provide us with our freedom. Sunday proved to be a day filled with strong performances and a day which Cavan Biggio will not forget:

Congrats to @doinitBIGgio23 on his first career @MLB hit! pic.twitter.com/5RHDJFw91t

Biggio did not stop with his first hit, he also hit his first major league home run in the fourth inning culminating in the first three-hit game of his career. Teammate Lourdes Gurriel Jr. went four-for-four with three runs, a double and his third home run, in as many days. Gurriel’s 6-for-10 since his recall and it appears he no longer wishes to ride a bus to games. Also worth noting, Gurriel played outfield for the first time and recorded an assist. Justin Smoak launched two home runs and has hit five in his last five contests.

For the Padres, Wil Myers homered for the second straight game, his third in two days at Rogers Centre. Luckily for his owners, Myers will head to the Bronx for a three game set looking to continue his recent surge in power.

Despite missing time with a thumb sprain, Austin Meadows seems to show no ill effects. He went 4-for-4 on Sunday with two runs, his 10th home run and fifth stolen base.

Justin Turner racked up five hits for the Dodgers and scored three runs in a win over the Pirates. Turner’s on a modest four game hit streak but raised his average by just under 40 points in it. Joc Pederson crushed his 15th home run, all against right-handed pitching, and drove in two runs on two hits. On the eight game road trip, Pederson’s 10-for-25 (.400) with seven runs, two doubles, two home runs, seven RBI, six walks and one strikeout.

Another day, another Twins rout. Eddie Rosario hit his 16th home run, a three-run shot, pacing the Twins offense. Over his last 17 games, Rosario’s hitting a robust .394 (28-for-71) with 14 runs, three doubles, four home runs and 17 RBI. Max Kepler added his 12th home run and has homered in three straight contests. Kepler also owns an eight game hit streak with a 1.496 on-base plus slugging in it plus five doubles, four home runs and 14 RBI. Byron Buxton added his ninth stolen base. Minnesota as a team has 14 this year.

Like the Twins, the Brewers offense also surged as the teams will face-off starting today in an interleague tilt of intrigue. Ben Gamel recorded the first multi-home run game of his professional career driving in three runs. Yasmani Grandal hit his 10th home run and fourth in his last 11 games during which he’s hitting .313 (10-for-32) with 12 RBI, 11 walks, a .477 on-base percentage and a 1.227 on-base plus slugging rate. Some guy named Christian Yelich hit his 21st home run and stole his 10th base for a smash and dash. Plus, he’s the only major league player so far with double digits in each category. Dating back to last year’s All-Star break, Yelich has hit 46 home runs since. Mercy.

Fueling a win for the Royals, Hunter Dozier matched a career high with four hits and hit his 11th home run. Dozier hit 11 home runs in 2018 as well in 102 games, this year, it only took him 48 to match them. His next dinger will be a career best.

Nolan Arenado racked up his sixth straight game with multiple hits. He also homered for the third consecutive contest. Arenado’s 14 for his last 26 with two doubles, four home runs, nine RBI and a ridiculous .538/.556/.1.077 slash line.

Also red hot, and on his way to Coors Field, Ketel Marte . Marte homered for the third straight game in San Francisco and he’s recorded multiple hits in seven of his last 10 games. Marte’s currently on pace for 37 home runs and nine stolen bases this year. 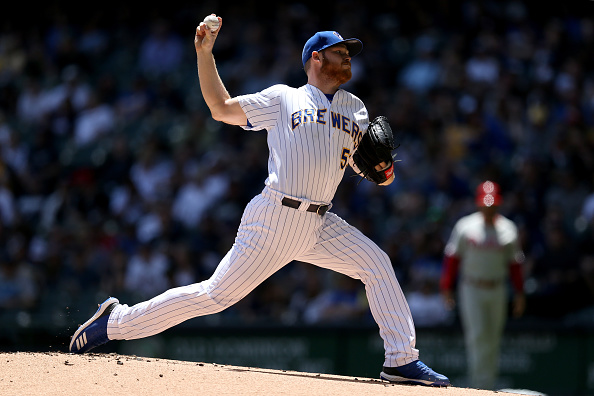 On a slate which seemed to focus on how Justin Verlander would fare versus the Red Sox, Brandon Woodruff stole the show with a dominating performance against the Phillies. Woodruff fired eight innings giving up a solo home run to Andrew Knapp with 10 strikeouts. This sets a career high for Woodruff in strikeouts and over his last six starts, he’s won five with a 1.42 ERA, 0.82 WHIP and 43 strikeouts in 38 innings. Of his 97 pitches, Woodruff generated 15 swinging strikes and 24 called for a 40.2 Called plus swinging strike percentage (CSW).

Here’s the other notable performances from Sunday:

Entering the season, Alex Cora hinted his bullpen would be fluid with Matt Barnes being used in the most high leverage situations, not necessarily for just saves. Barnes faced the top of the Astros order in the bottom of the eighth inning, and recorded his eighth hold walking one and striking out two. Brandon Workman , who saved a game on the 19th, pitched the seventh. So, Marcus Walden notched his first save of 2019 with a clean ninth striking out one. Through 17 innings in May, Walden’s recorded a 1.06 ERA with a .071 WHIP and tidy 18:2 K:BB rate. Invest with trepidation.

Here’s the rest of the high leverage outings worth noting from Sunday:

Also, Chris Paddack got scratched with neck stiffness moving him back to Wednesday in New York. He could face James Paxton, who aligns to be activated to start on Wednesday in the Bronx.

Cincinnati will face Pittsburgh in a day, night, doubleheader. Luis Castillo pitches the first game for the Reds and rookie Mitch Keller will make his debut in the night cap for the Pirates. Keller owned a 3.45 ERA with 56 strikeouts over his last 10 starts in Triple-A.

Gerrit Cole and the Astros will face former nemesis Cole Hamels as the Cubs arrive for a series between division leaders.

Will Minnesota stay hot? Gio González will try to quiet their bats and takes the mound tonight with a 2.39 ERA but also a 4.09 xFIP. Correction could be in the offing.

Be sure to stay ahead of the competition with Fantasy Alarm and peruse all the great material published daily.

P. Goldschmidt - 1B
STL
Paul Goldschmidt said Friday that his right elbow is now 100 percent.
Goldschmidt dealt with elbow soreness during the spring and likely would have been compromised at the start of the season, but the shutdown allowed him to get some extra rest and treatment. Now there shouldn't be any concern about the elbow impacting his throwing or hitting. He took some swings against Jack Flaherty and Austin Gomber during the team's first summer workout on Friday. Goldschmidt, 32, is coming off an uneven first season with St. Louis where he batted .260/.346/.476 with 34 homers and 97 RBI over 161 games.
Added 11:19 am (EST)
Added 11:19 am (EST)

J. Alvarado - RP
TB
Jose Alvarado said Saturday that he feels 100 percent.
Alvarado got some throwing in Saturday at The Trop and said that he felt good. The southpaw missed the final five weeks of last season due to left elbow inflammation and was shaky out of the gate prior to the March shutdown, but the time away has been beneficial for him. He should have a prominent role in the back-end of the Rays' bullpen once again.
Added 10:31 am (EST)
Added 10:31 am (EST)

M. Stroman - SP
NYM1
Marcus Stroman expects to arrive at Citi Field for workouts on Sunday.
Stroman wasn't present at the first summer camp workout on Friday and the Mets provided no explanation for his absence. Rather than let speculation run wild, Stroman decided to provide an update on his status to Mike Puma of the New York Post via Twitter. He said that he tested negative for COVID-19 and report dates are staggered "based on previous workouts and throwing routine." Amed Rosario was the other noteworthy Mets player who was absent on Friday and it's unclear when he'll arrive.
Added 8:44 am (EST)
Added 8:44 am (EST)