Fantasy Baseball Daily Round Up: April 15 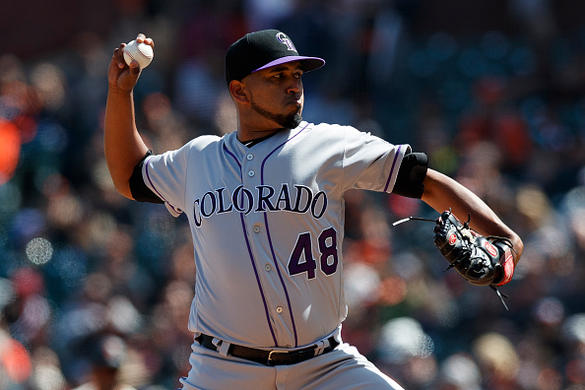 An ongoing debate rages on Twitter regarding German Márquez . No matter which side one sits on regarding his ability as a pitcher, he did turn in the first complete game of 2019, and missed a no hitter by one batter. Marquez only recorded 13 swinging strikes, eight with his curve, with 24 called en route to nine strikeouts and his second win. His early season schedule, combined with three road starts fuels his current 2.00 ERA, the show me crowd will wish to see this type of result at home.

No player will be immune to blips in fantasy. However, two of the most targeted pitchers in early drafts struggled on Sunday. Jacob deGrom lost his second straight decision in Atlanta and yielded multiple home runs in consecutive outings. Last year, deGrom allowed five home runs over his last 134.2 innings to conclude the 2018 season. He’s given up five in his last 7.1 innings. This seems like a time to see if his owner may be frustrated.

However, the concerns about Corey Kluber could be more prescient. On his 200th career start, Kluber retired eight of the 18 batters he faced allowing six earned runs and five walks in 2.2 innings. He needed 89 pitches to do so. His velocity dropped at the end of last year and it’s carried over. Yesterday, Kluber averaged 90.9 MPH with his four-seam and 91.5 with his two-seam. Yes, Kluber can be considered a slow starter. However, here’s his velocities at the onset of last year prior to them dropping in September: 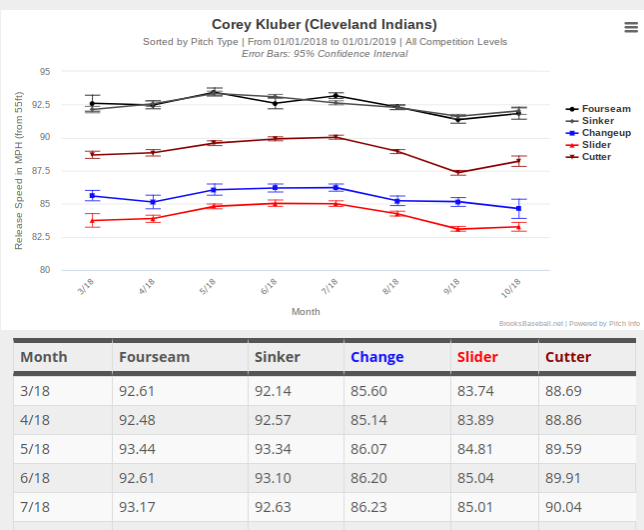 With this in mind, here’s Kluber’s velocity chart courtesy of Statcast: 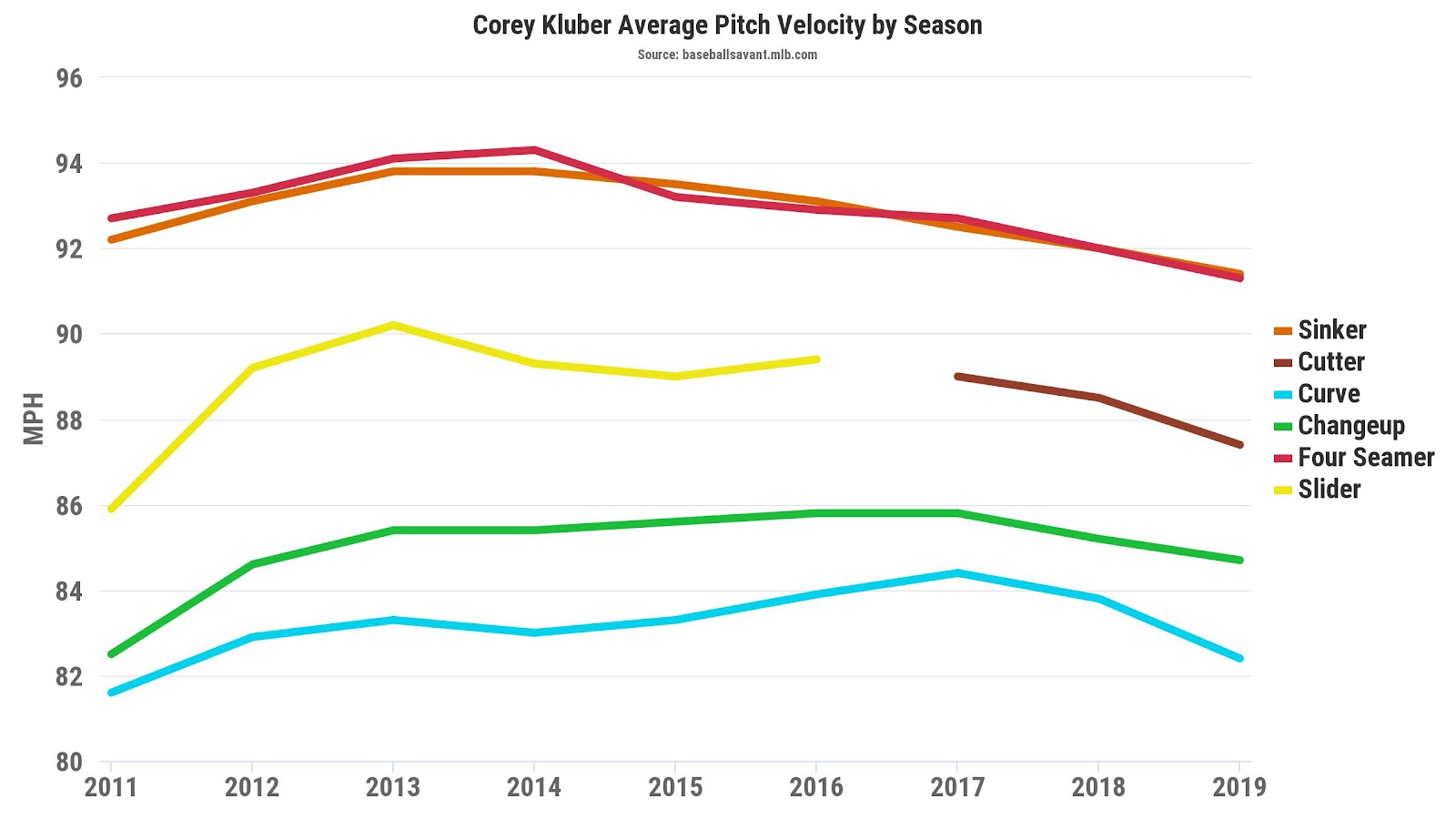 It could be nothing, but it also could be something. Back injuries can linger as Clayton Kershaw knows all too well. Kluber owners need to focus on this going forward. In an effort to encapsulate all the action from Sunday, it’s time to catch up in the Round Up.

Racking up 18 swinging strikes, David Price tossed a three-hit shutout at home against the Orioles with seven strikeouts over seven innings. He also accrued 12 called strikes in this outing but mixed his pitches well:

David Price had 18 swing-and-misses today against the #Orioles, his most since he hung up 21 against the #Orioles last August. His fastball peaked at 94.1 mph, per Brooks Baseball, and set up 28 changeups, which averaged 84.7 mph. Winning mix. #RedSox

José Berríos won his second decision of 2019 allowing two earned runs on four hits and a walk with seven strikeouts. He recorded 14 swinging strikes and 19 called of his 98 pitches. If Berrios can pitch well on the road, his breakout could be a deciding factor in Minnesota’s playoff aspirations. Here’s other lines worth noting from Sunday:

Part of the Astros success in their nine game win streak, it’s ability to shorten games with the bullpen. Roberto Osuna notched his seventh save with a clean ninth inning and two strikeouts. He’s converted 19 straight since joining the franchise and 22 in a row dating back to last year. His setup reliever could be a top-10 closer on any other team. Ryan Pressly recorded his fourth hold with a clean eighth and a strikeout. Pressly’s in the midst of a 28 game scoreless streak which spans 25.2 innings during which he’s allowed a .126 batting average against and struck out 35 hitters.

As the Boston bullpen turns could be a new segment in fantasy baseball. Ryan Brasier , who closed out the last three saves, pitched the eighth on Sunday with a one run lead. This meant Matt Barnes would get the save chance. However, a three-run home run by Xander Bogaerts negated the opportunity. Barnes did pitch the ninth. Remember when Cody Allen and Andrew Miller worked in tandem for Cleveland? This could be how fantasy owners should view Brasier and Barnes. Each will maintain value in their present roles, but, Barnes will be asked to pitch the highest leverage moment in games, hence his usage in the sixth inning last week. Again, here’s a recap of the other high leverage situations from Sunday:

With Ender Inciarte struggling at the dish, it appears Ozzie Albies will not only bat leadoff against southpaws, but he will do it full-time going forward. Hitting atop the lineup, Albies currently slashes .348/.414/.538 through 29 plate appearances with six runs, a home run and two stolen bases in six games. Teammate Josh Donaldson ’s also surging homering in back-to-back games and hitting .391/.517/.826 his last 23 at-bats with six walks.

After a slow start, Billy McKinnney racked up three hits on Sunday with two doubles and his first home run driving in two. Freddy Galvis stayed hot with two hits, his fifth home run and two RBI. Galvis will slow down, but his average exit velocity of 91 MPH with an average 17.7 degree launch angle could defray the regression of power.

Two smash and dashes in Miami on opposing sides of the game. César Hernández hit his first home run and stole his second base. His slow start fuels speculation about more playing time for Scott Kingery, but there’s time for a rebound. BrIan Anderson recorded his second home run and stolen base on Sunday. Over his last four games, he’s hitting .467 with two home runs, three RBI and four walks.

Could the power surge fantasy owners craved for two years by Josh Bell be happening? Over his last 10 games, Bell’s hitting a robust .378 (14-for-37) with five doubles, a triple, three home runs and eight RBI.

Another slow starter, Eddie Rosario ’s catching fire. He went 3-for-4 with his third home run and two RBI on Sunday. His last nine games yields a .371/.421/.714 line with three home runs and 11 RBI in 38 plate appearances. Mitch Garver stayed hot with two more hits, both doubles, and a walk. He’s tallied three doubles and three home runs in seven games with a 1.567 on-base plus slugging percentage.

Boring veteran Elvis Andrus racked up three hits, including a triple and his third home run. He also stole home, for his fourth steal this year. Delino DeShields went 2-for-5 with a double, RBI and two stolen bases. He’s only hitting .200, but stolen five bases. Better days lie ahead.

Barrel number one for Nolan Arenado , and it resulted in his first home run. A power surge at home against the Phillies could be in store this weekend.

Seattle moved its franchise record to 18 straight games with a home run when Mitch Haniger led off with one on Sunday. Over the last seven days, Haniger’s slashing .333/.345/.852 with nine runs, three doubles, a triple, three home runs and seven RBI.

A double dong game for Marcell Ozuna in Mexico against the Reds. He’s now hit five this year. Jesse Winker launched his fourth in this game. He seem assured of hitting for average with the power to emerge as the year ensued. He’s hitting .190 (but with a .288 expected batting average) with the four home runs. Target accordingly.

With seven right-handed pitchers on tap this scoring period for the Dodgers, it’s time to fire up Joc Pederson . He hit his sixth home run on Sunday and should be in the lineup due to splits advantages. Plus, Pederson will get four games in Miller Park starting on Thursday. In his 27 plate appearances in Milwaukee, Pederson’s slashed .333/.481/.762 with three home runs.

First and foremost, be sure to set lineups with the Boston Marathon game at 11 a.m. EST, weather permitting.

With Arodys Vizcaíno on the disabled list for the third time in 11 months due to his shoulder, and the Braves hoping to contend, will they bite the bullet on Craig Kimbrel ? In other team news, Mike Foltynewicz will make his last rehab start at Triple-A and rejoin the rotation this weekend. Who gets bumped?

Clayton Kershaw will make his 2019 debut opposing Luis Castillo . It will be intriguing to see how each pitcher does with their stocks potentially heading in opposite directions. Key on Kershaw’s velocities and how Castillo does on the road against a tough lineup.

R. Braun - RF
MIL
The MLBPA lists Ryan Braun as a free agent.
Braun's contract either called for a $15 million mutual option for 2021, or a $4 million buyout. Unsurprisingly, it appears the Brewers have decided for the latter. The soon to be 37-year-old hit just .233/.281/.488 in 39 games while dealing injuries to his back and finger. It seems plausible that Milwaukee could have interest in Braun at a significantly lowered rate, but it's also possible that the former MVP will either be playing with a new club in 2021 or possibly decide to retire.
Added Yesterday 8:59 pm (EST)
Added Yesterday 8:59 pm (EST)

Z. Britton - RP
NYY1
Andy Martino of MLB.com reports that the Yankees are exercising Zack Britton's club option for 2022.
With the Yankees picking up the 2022 option, Britton's $13 million player option for 2021 becomes locked in. He'll make $14 million in 2022. The left-hander has posted an ERA below 2.00 in each of the last two seasons, and it was 1.89 in 20 games in 2020 with a 16/7 K/BB ratio over 20 appearances with a 1.00 WHIP and .174 BAA. Britton will be a high-leverage reliever again for the Yankees in the next two years, and has a chance to earn save chances -- depending of course on Aroldis Chapman's health/involvement with the organization.
Added Yesterday 6:59 pm (EST)
Added Yesterday 6:59 pm (EST)

P. Venditte - RP
MIA
Marlins outrighted SHP Pat Venditte to Triple-A New Orleans.
Venditte was reinstated off the 60-day injured list before being outrighted off the 40-man roster -- and the Marlins did the same with Josh A. Smith and Mike Morin. The both-handed pitcher threw 4 1/3 scoreless innings with five strikeouts and no walks before suffering a right oblique strain in the middle of August. Venditte, Smith and Moran are all expected to become free agents.
Added Yesterday 6:15 pm (EST)
Added Yesterday 6:15 pm (EST)

M. Morin - RP
MIA
Marlins sent RHP Mike Morin outright to Triple-A New Orleans.
Morin was one of three pitchers that were reinstated from the 60-day injured list only to be outrighted off the roster. The right-hander was placed on the IL with a right elbow UCL injury in August after appearing in just three games. He's expected to become a free agent after refusing the assignment.
Added Yesterday 6:15 pm (EST)
Added Yesterday 6:15 pm (EST)

J. Smith - RP
MIA
Marlins sent RHP Josh A. Smith outright to Triple-A New Orleans.
The Marlins need to clean up room on the 40-man roster, so Smith along with Pat Venditte and Mike Morin have been removed from it. The right-hander was ineffective in his 16 games and 26 1/3 innings with a 6.84 ERA and 1.67 WHIP. The expectation is that all three pitchers will become free agents, so Miami no longer has a monopoly on the Josh Smith market.
Added Yesterday 6:14 pm (EST)
Added Yesterday 6:14 pm (EST)

D. O'Day - RP
ATL
Braves declined the 2021 club option of RHP Darren O'Day.
O'Day could have been brought back for $3.5 million in 2021, but the Braves have decided to instead pay a $500,000 buyout. The 38-year-old posted a sparkly 1.10 ERA with a 22/5 K/BB ratio over 19 appearances. The 38-year-old right-hander could be of interest to Atlanta at a lower salary, but other teams needing help from a right-hander in the bullpen will also assuredly be interested, as well.
Added Yesterday 4:48 pm (EST)
Added Yesterday 4:48 pm (EST)

P. Gosselin - SS
PHI
Phillies placed INF/OF Phil Gosselin on outright waivers.
Gosselin is one of four players to be removed from the 40-man roster by the Phillies on Thursday. The versatile infielder-outfielder posted a .726 OPS in 39 games with three homers and 12 RBI over 92 at-bats. Because he can play all over the field, there should be interest in Gosselin's services this winter -- assuming he clears waivers and becomes a free agent.
Added Yesterday 4:39 pm (EST)
Added Yesterday 4:39 pm (EST)